Some good points (that have generally been made by people here) and some points that are real stretches. 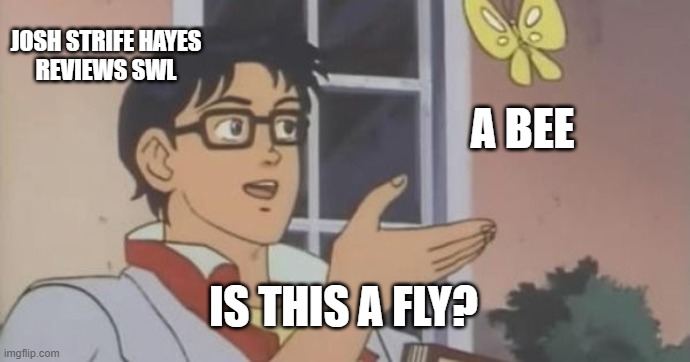 Watching that wheel spinning 99% of his review because he downloaded minimum client and is now downloading 30gb game in background in 4mb/s speed o.0

Heh! His review is what finally got me to try SWL. Been wanting to check it out for years. And now here I am.

Don’t worry as soon as I saw the switch/checkbox in the menu, while fiddling around when SWL was downloading, I ticked it. Of course I want it all on my disk, not download the rest in piecemeal later.

“The best shells are ones that do more damage, in evry situation.”

First no, right there. Personaly i like the Dragons Breath ones most, since the DoT realy stacks up. And for tanking, Anima infused are the only real option since a passive makes you glance more often when loading them.

His game looks realy unstable, with all the crashing. Dont get why. Maybe he shuld have instaled a full client, maybe he shuld have put it in win7 compatibility mode. I did both, and I cant remember the last time I had SWL crash on me, and I play evry day.

“SWL is so badly optimized its like they dont want you to play the game.”

No, sweety, you just need to learn to OPTIMIZE it yorself. I did, and its not hard. Win7 compatibility mode, all display setings to ‘application controled’, and thats it. NO crashes for me. Zero. And I’m not any kind of PC expert. I just spent more then 1 minute looking into it, and didnt jump to concluzions.

“This is the only time in my 8 hour play-thru that i had to use a torch.”

So let me get this straigt, he didnt even get to Egypt? Hes stil in probably the 1st half of Solomon island, and hes alredy writing a review of the WHOLE GAME?! Sweety, you didnt do a PLAY-THRU. You did maybe 1/4th of it. Maybe. Red flag. Big one. Probably one of those ADHD reviewers who cant be bothered to actualy play the game properly first. Lovely. Ofc, the fact he chose Iluminati clowns as his faction is a first insight into his state of mind.

Youd think after crashing so much, he’d LOOK INTO IT a bit. Not just reenter the game? Nooo.

Maybe a lesson in there somwhere, sweety? Noooo. He just goes back in vithout looking into it. AGAIN. This guy is seriusly starting to get on my nerves by now. I emphasize again: I havent had the game crash ONCE on me, in probably weeks now. Hes just full of s**t. And in-capable of doing anithing about it.

“There wer 3 players around me, and it culdnt handle that.”

There wer about 20-so players around me, last time I’ve been to Agartha hub. Zero problems. I rest my case.

Wel at least he tryed something. Finally. Too bad it vas the wrong thing to try. My graphics settings in-game are on full. Its not the detail level, its the global video settings that are the problem for him.

So he did a half-meazured solution. Fair enogh. Still didnt look past the surface, but at least it looks like that did it in his case.

“The magical light-powers, all but forgotten.”

Here i agree vith him. Especialy in cutscenes, we’re way too ‘only human’y’, for my taste, taking crap from evry punk off the street vith a peashooter (but I made my point clyar on that by now). But from game-play point, he just picked the wrong class

. he shuld’ve gone with Elementalist, to have ‘light powers’ hehe. Thats his problem.

“The game has crashed more then it shuld.”

Ugh. Hate to be KG (cant stand her), but thats his problem, too. Then he fails the easyest stealth ‘mission’ of the game, becauze he’s too ADHD to obzerve camera-patterns. And blames it on the game. Lovely. He shuld try that same mission in classic TSW.

In Legends it’s a breeze, in comparizon.

No… You just suck THAT much. Again, your problem sweety. I have my beef vith the ‘git gud’ expresion, but in his case it applys.

Aniway the rest of his ‘review’ is him whining. Whatever. And it looks like he never even got past Kingsmouth town.

So basicly, he ‘reviewed’ a game he only played the intro area of. Great. ADHD at its finest.

1/10 review. And i’m being generous in not giving 0/10, just cuz I agree vith him on the lack of ‘magical light powers’ (in cutscenes).

I’ve never seen anyone so high on copium as you are.