When are they going to switch to qbits?!

Holodeck would be so nice

Vorpx works tho doesn’t it? I thought I read somewhere that it worked OK-ish…

Hmm I don’t know i play on ps4. But I don’t own psvr, because I don’t know why I should. No games. Maybe no mens sky would be interesting. But the quality of psvr is not realy good. Even the best vr options on the market are not enough for what I want to see… Hmm maybe I am waiting for the holodeck version

But it would be realy funny to play Conan like this: 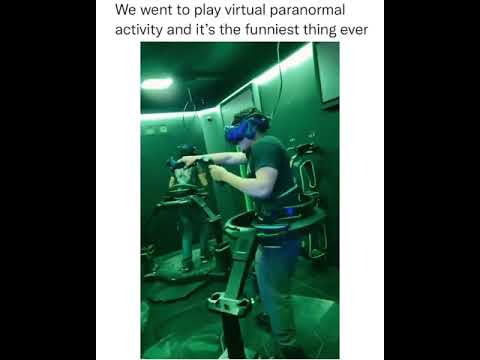 They went to play virtual paranormal activity and it's the funniest sh*t EVER!

Yeah, there are VR headsets that likely do live up to your expectations but they aren’t mass produced and cost $7k ~ $12k. I opted for the $300 Oculus Quest II which is lightyears ahead of PS-VR in versatility and technical specification. It has it’s problems but can be fun, especially when used as a wireless PC-VR device and not running the scaled down “oculus” versions of games internally on it’s smart-phone processor. And of course, VR without animation canceling would probably make you feel really sick.

Maybe this will be the new sorcery of Conan Exiles. What an interesting time to be alive.

Don’t care if Sorcery is anything like I proposed or something wildly different, I just want to see it in the game. If anything, just to bring more play-options to the table to go with the existing slashy, bonky, pokey, or pew styles.

Happy new year, Exiles. I’m going to start writing this up on my phone, with more updates and expansions to come later. I’m keeping this separate from the main post as it’s purely a lore dump/speculation, not inherently tied to the ever-ongoing scavenger hunt for clues. They’ve been posting some of the siptah concept art on social media lately, and I will be looking into that on the main post shortly. But for now, let’s get into what this post is about;

Sorcerous Patrons And You: An Amateur Wizard’s Guide to Magic

For those of you unfamiliar with how magic works in the Hyborian Age setting, let me give you a brief contrast to magic in other trope-laden fantasies.

No one is born with magical powers, at least not in the conventional sense. Conan for example was born and lived as a flesh and blood man; but there is no argument many of his deeds were aided by the supernatural, and divine intervention.

The easiest way to become a sorcerer is to harness the power from something else. Magic isn’t internal, there is no mana and there is no innate ability to cast spells.

The sorcerer Yara got his powers by holding a literal ■■■■ing alien captive and siphoning it’s energy.

Thoth-Amon wielded the legendary Serpent Ring of Set, an artifact of the arch-demon snake-god himself.

Both of these sorcerers lost their powers when they lost their relics. Yara even got merc’d by his pet alienphant. With great power comes great risk.

But what about some other sorcerers? How about the titular Siptah?

Side tangent, does anyone else read the journals and think he sounds like Nazeem from skyrim? Is it the same voice actor?

Now this part I’m going entirely off memory for my first draft of this post, as I’m away from my computer and my books currently.

Siptah came to the tower with nothing, and gained his power from the tower itself. We know the tower was created by the Elder Races, who in turn were betrayed by it. It’s power comes from Nyarlathotep. Nyarlathotep.

For those of you unfamiliar, Nyarlathotep is not a being written about by REH. It’s an Elder God born from the mind of none other than the legendary HP Lovecraft. The cthulhu guy. That’s right, this whole time this game has secretly been a lovecraftian survival horror all along. Hell, it’s a theory that the exiled lands aren’t even a real place, but some planar snowglobe soul prison run by Nyarlathotep himself. Before they removed wild surges, they were hurled down literally by him tearing a hole in the sky and casting open a portal with his tentacle.

So what does any of this mean? Well I honestly do not have the time to do the full thing justice and that would require and equally lengthy separate thread entirely, so I’ll skim for now.

Main thing is, Nyarlathotep is known as the Crawling Chaos, the Black Pharoah. He came to the world of men in the guise of an Egyptian king and performed sorcerous acts to drive men mad, shepherding them wholly out of their reality and into his endless maw, consuming them soul and body. Mortals are his food, and his plaything. Whatever pact he has made with Siptah, the price must be steep.

Even without these great costs, being a sorcerer generally isn’t a sustainable way to live. My favorite sorcerer I have yet to mention, Thugra Khotan meets his end in a more traditional way; Conan straight up yeets a sword into him.

There is no magic to prevent a physical death. They can prolong their lives, induce magical comas and even conjure impassible barriers, but in the end they are still flesh and blood. We see this most clearly in Grave Matters, as the sorcerers are untouchable until the totems are destroyed. After that they are very much touchable.

Not only can they die, they’re actually pretty weak. It’s been widely talked about and mostly agreed upon, corruption goes hand in hand with this. The exact specifics I can’t begin to outline as I do not know them, but we do know they’re inherently linked. Wherever there is sorcery, there is corruption. It weakens the body, making you more vulnerable to a mortal end; but the boons it grant are yet to be seen.

Vorpx works tho doesn’t it?

Vorpx is a hack. It’s not supported by the game makers. Yes, it works, but… immersion and mechanics (that are supported) are much better for the array of stances and views. Controllers would need to be redone, so there is question about cross-play in VR.

Just finished watching Wak’s video on the future of the game for 2022.

In the video, he asks Den a handful of questions and gets responses back in a very choosy wording. Overall, I’m happy with the responses. The main takeaways are three things:

You’re out of your mind XD.

Since we’re speculating, do you think that we will get a glimpse of what is coming for Conan Exiles on the 10, when the event ends, like a new event or a follow-up of the one we have ? New events might tie in to their renewed vision of the game, linking events and next updates for example.

You’re out of your mind XD.

When one deals with Elder Gods and sorcery, that tends to happen.

Since we’re speculating, do you think that we will get a glimpse of what is coming for Conan Exiles on the 10, when the event ends,

Probably not right away. There will be a gap of time to wind down until the next event, give the new one some time to marinate with more clues.

like a new event or a follow-up of the one we have ? New events might tie in to their renewed vision of the game, linking events and next updates for example.

This is absolutely what I’m thinking. Grave Matters is only act 1 of a growing story. What remains to be seen, we will have to wait and speculate on.

I’ll keep this thread alive as long as I can, there’s still so much more to delve into. I can theorize all day, and supplement it with sharing bits of lore with everyone to help get everyone immersed and ready for the future

Sorcery was promised in early access. It was again promised in an interview with Firespark81. It is still not being implemented and so far, it looks like it will never be implemented. I must say I am appalled by this development that sorcery is not the new feature that is to be added in 3.0.

Just finished watching Wak’s video on the future of the game for 2022.

I must disagree with Wak’s opinion that we are on Conan’s side. Conan helps us in the beginning, but he has no involvement in our choices or where we go from there.

We never even have to option to tell him about Razma after we defeat the Witch Queen and meet her in Seppermeru.

I would say that, if Conan actually got involved, players would range greatly from being his allies, to indifference, to actively being his enemies.

There is no story reason why we shouldn’t be able to wield sorcery.

I must disagree with Wak’s opinion that we are on Conan’s side. Conan helps us in the beginning, but he has no involvement in our choices or where we go from there.

I also disagreed with him, but on a separate point. Even Conan isn’t absolutely opposed to sorcery. There’s many instances of him being directly helped by sorcerers, as well as gods.

There is no story reason why we shouldn’t be able to wield sorcery.

This, 1000 times this. The only thing that may stop it is the bracelets, but even then there’s loopholes around that.

The only thing that may stop it is the bracelets

Well, I’ve already said my opinion on that. I don’t think the bracelets prevent the use of magic.

Just gave that a read over. Pretty solid observation. I guess it really comes down to the method of which one obtains their powers. Ol mecha-moses seems like his powers are obtained by knowledge and some connection to the outer void. Even if the bracelets block both of those, those aren’t the only ways to wield sorcerous power. As I posted recently, this power can be obtained by wielding artifacts, pacts with gods of all kinds, or by siphoning from another being. So whatever method is done in the future, that isn’t ruled out entirely.

Plus, he could always be overexaggerating how powerful he is/was. He’s definitely the type to overembellish the details

No one has correctly guessed what 3.0 is. That includes and I feel like is a little directed at me. Sorcery is not 3.0

Even Conan isn’t absolutely opposed to sorcery. There’s many instances of him being directly helped by sorcerers, as well as gods.

If you mean Tsotha-Lanti, I’m pretty sure that was L Sprague deCamp, so we can’t count that

More seriously, you’re absolutely right that there is nothing to say we are ‘on Conan’s side’ - many of us might choose to be, but there is nothing that binds us to that and Conan’s (early life) reticence towards magic does not automatically apply to us.

Moving aside from the sorcery for a moment - one part of what Dennis said in Wak’s video that really interested me was the focus on making the Exiled Lands feel more lived in. That’s something I’d like to speculate on and get players’ opinions on what would have that effect for us - but I don’t want to hijack this thread, so if you’d prefer to keep it sorcery focused, I don’t mind starting a fresh thread to cover that side of things?

If you mean Tsotha-Lanti, I’m pretty sure that was L Sprague deCamp, so we can’t count that

Tsotha-Lanti was indeed a Howard character who appeared in The Scarlet Citadel, but he was the villain of that story. The other sorcerer who aided Conan against him was his rival, Pelias.