3001 Ways to Die currently has 5 servers in a cluster with a server transfer mod that you can transfer from one server to the other. Just added The Empire of Stygia map server, which is currently being set-up. The servers are listed below.

Isle of Tir-na-Nog is currently in the winter version of mod and we will switch the season when the Real Life seasons changes in North America. Please note, we are set up as heavy modded servers. Currently the number of mods are either 45 (EL and IoS servers), 43 (SW server) or 42 (ITN and TEoS servers). 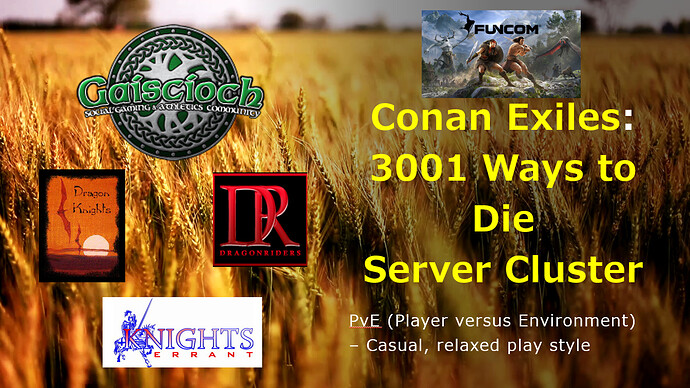 Please note: Each server has a different mod list so server transfers will take a bit longer. (ES to IoS is the exception since they currently have the same mod list for quicker transfers to base game maps)

Our servers are casual play, where you have freedom to build (up to 15k per server) and not worry about decay timers (no decay for structures or followers) although, we do have a rule we can clear out properties of players/clans (level 100 or below) that were in-active for 4+ months. For high levels players / clans (over level 100), we have a 6 month timer before Admins may wipe their properties. (Please note, the exception is anyone 30 or lower will have only 2-month retention timers for inactivity. This is assumed those players quit the servers after a couple days of playing.) Waiver may be granted for extended in-activity. Please note, with a mod, our top level is 300. 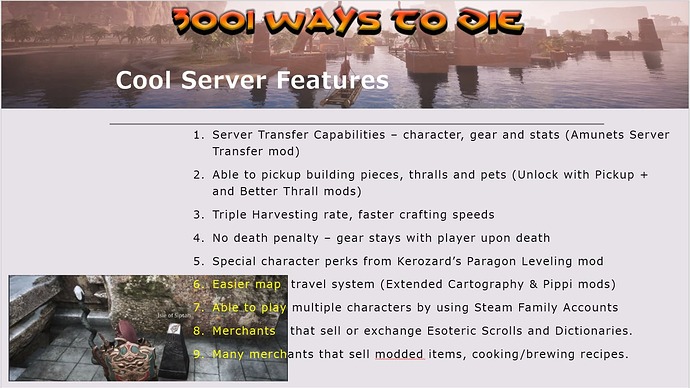 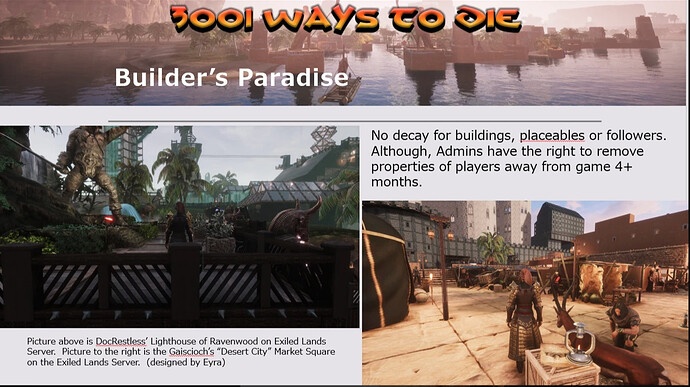 Our discord is: Discord

For more information about our servers: https://www.3001waystodie.com/

I hope you find us interesting to check out our servers. Thank you.

Steam Workshop: Conan Exiles. This is the current collection of the 3001 Ways to Die Server Cluster mods (Exiled Lands, Isle of Siptah, Savage Wilds, Isle of Tir-na-Nog and The Empire of Stygia servers) Hosav UI mod is not cur