An idea to have a more alive world

For more Alive world, I suggest the MOD thrall are alive! 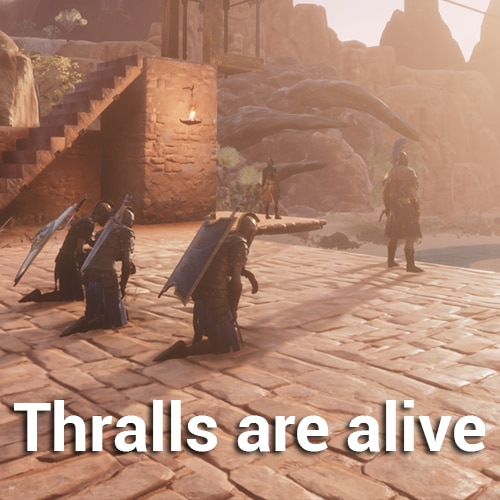 With Idle function, Thrall walk around your base and interact witch things.
It work fine.

I would like a funcom function like that to having that without mod and on console too. 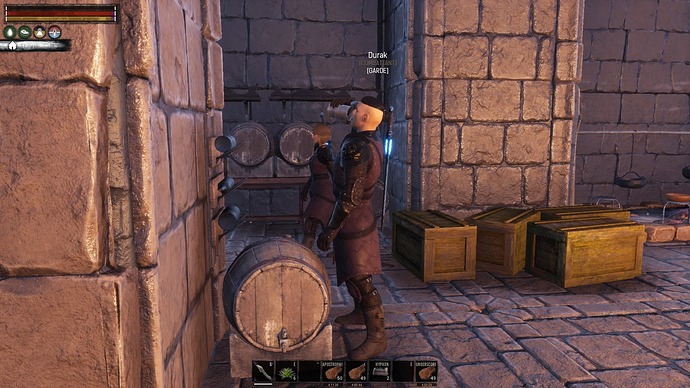 20220617003605_11920×1080 266 KB
They are autonomous and can go to work station or Ale Keg to drink, and maybe other interactions.
pathfinding work good, and you can too define patrol path, and choic in times: night/day/evening what they do betwin ideling, sleep (in their bed) training, and patroling.
It make theexperience clost to elder scroll cities.
1 Like
GodsOfExiles June 18, 2022, 2:57pm #63

Whenever I see your posts, I wish I had the lovetap and could lock you in the wheel of pain forever. So that you move in circles like your posts.

Please forgive me for my statement, but we have often enough discussions about posts that we have already chewed through a hundred times.

You fail to see the beauty of the AI base on the player.

False. I fail to like the same things you do.

Why is that such a huge deal?

I like to avoid the forums. Most forums are toxic. When your account 15 days old and you been playing since beta.

My base though, as i think you might actually be talking about, well i wouldn’t say no to something like say Trigger Mats, a placeable you put down then place a NPC on and it can “assign” them a role, say you set up a bar you place the trigger mat and assign the thrall as a barkeep and the thrall then cycles animation relevant to that or say you build a wall 4 foundation long, place relevant trigger mat an stretch it them 4 foundation, now Thrall will walk that wall.

Non important things but something i’d like to see, i’d settle for more Thrall emotes

Yep, more emotes and voices/sound ! It’s so creepy to see all this bases with these motionless and silent thralls like an army of statues.

When the thralls are allowed to do the war dance, they recite these spells of their nation. Just like the thralls in the camps.

Well, I can make Siptah items in the exile lands, I brought a lot of materials to the exile lands during server transfer, all the recipes I learned beforehand and I can craft them without any problems. You just need a Cha who knows the recipes and the materials.

Yes, I did mention that transfers with the recipes was an option.

I should have mentioned that I’m talking about official servers and not single player. sry

I apologize, because I was talking to someone who stated they play single player, I failed to mention that you can indeed learn then transfer and keep crafting anything from Siptah on officials, provided you have the necessary materials.

Thank you for filling in the method I mistakenly omitted.

These AI could be useful in single player due to a few facts.

1.) The servers aren’t always active on Tuesday-Thursday. The days I’m off from a 12 hours a day factory job. Making online worthless to me.

2.) These AI are basically player AI.

3.) These AI respawn upon death.

4.) These AI can be programmed with custom messages and use all emotes. Coming home from a bad day of work just to have your AI say welcome home.

5.) These AI would be able to harvest. A weight limit like the player.

6.) Full custom stats that you the player can control. As well as their feats they gain. Imagine being able to switch in offline mode to a different body. Because these AI are you. This is why they can harvest.

maybe you should start modding. your ideas of how the game should be are very specific. most people would rather play the game themselves than let an AI play it

I understand what you want and all that makes npcs smarter and more interactive is good in my book, but what you ask doesn’t seem very easy to do. You want AI simulating other players. That’s quite the demand.
Ever though of playing in server on other timezones? You will have a nasty ping, but at least you’ll find people…

I don’t know whether to laugh at how bad Bryan is at concealing his identity or feel insulted that he thinks we’re dumb enough to fall for it.

I dont know who bryan is, or any of that. I think its a cool idea, though this isnt that game. That game has to be built ground up for all that to mesh, im just curious as to why some people attack others on this forum strait out. Sometimes a little more explanation is needed, but its better to ask than assume.

EDIT: Apologise if hes just a troll just started reading the second half of the arguements my original statement still stands though

The admins and moderator teams are smarter than what you give them credit for. I am not Bryan Skull due to our different devices. Every time you log onto Conan Exiles your device login is recorded. The admins are very smart so don’t underestimate them.

I want A.I. versions of my character. I want to make Tons of exiles and have them join my party. In offline mode. I want to create fully custom characters and make them work like players online. An experiment that is funcom controlled. First of it’s kind in any game. I want Conan Exiles to have these feature first. Making other open world survival games players wanting this but knowing Conan Exiles did it first.