Yes i also lived that game at start, but as you say…

Yes and if the pass is server or acount based to!

Could the cash shop be awesome? It could be … but i dont make these decisions. I would expect things like the twitch stream watcher items in the cash shop. As others have pointed out it would be nice to have a home for LTE items.

Now that you mention this, the cash shop would be a great place to sell the Royal armor and Atlantian sword.

Yeah you already pay for your internet and you pay again for a game , dlcs and expansions.

Looking at the various leaked screenshots, Battlepass dailies can be rerolled for a chance at better ones using Crom coins earned via dailies or purchased with real world money, so FC are implementing gambling. Store items are on a timer, as well as what would have been a 15 aud cultural dlc for example, is now carved up and individually monetized, most likely at a higher price total to buy everything from a particular culture, say Aesir. And some people are fine with this crap?

Are you ready to take the plunge into a new age? Join us tomorrow for your first official look at what we’ve been conjuring up.

I love how Andy says official

Same! It’s going live at 3am New Zealand time… I wonder if I should call in sick tomorrow

For what it’s worth there’ll be a recording up after the broadcast if you can’t make it.

Thanks, that’s good to know, I’ll watch it before work then

Some where in this vast jumble of wringing hands and assuming, someone mentioned that some countries are actually regulating or passing laws to stop FOMO? Doubtful

Some people have become hopelessly bewildered and unaware of reality and are living life in an online vacuum.
If you have a real fear of missing out on a digital item in an online fantasy game…you might want to re-evaluate your life’s priorities.

Yep, I know exactly what you mean. I was an early Beta player for that game. One of the rare ones that liked the game from the start (not many complaints). But after the in-game store got more and more bloated, I just couldn’t afford to keep playing. Too expensive. Over the years, I’ve thought about going back to ESO, but the in-game shop just ruined it for me. That’s why I like the flat DLC approach; I can’t afford all the ‘nickel and dime’ microtransactions.

I hear that. I knew it was doomed when they equalized the difficulty of all the lands. Right, it started off with each of the maps being progressively more difficult - requiring the proper leveling while at the same time offering more challenge to those wanting to play maps above their current level. Then the (10% minority) snowflakes got verbal and they caved. That’s when I knew the design team was more about caving to woke-ness than adhering to their own vision. And that, while potentially a financial success is doomed to fail in delivering a classically successful game. My hunch bore out as the store became awesome (from a bean-counter’s perspective) while the gameplay got worse - even with some nice artwork added in. But yeah, shortly after they added the Morrowind “Chapter” I knew my financial determination to continue the game was headed toward a brick wall.

It’s a shame too because graphically it’s a very compelling game.

what would have been a 15 aud cultural dlc for example, is now carved up and individually monetized

From watching the video I don’t think that’s the case though. Here’s the text from the video: 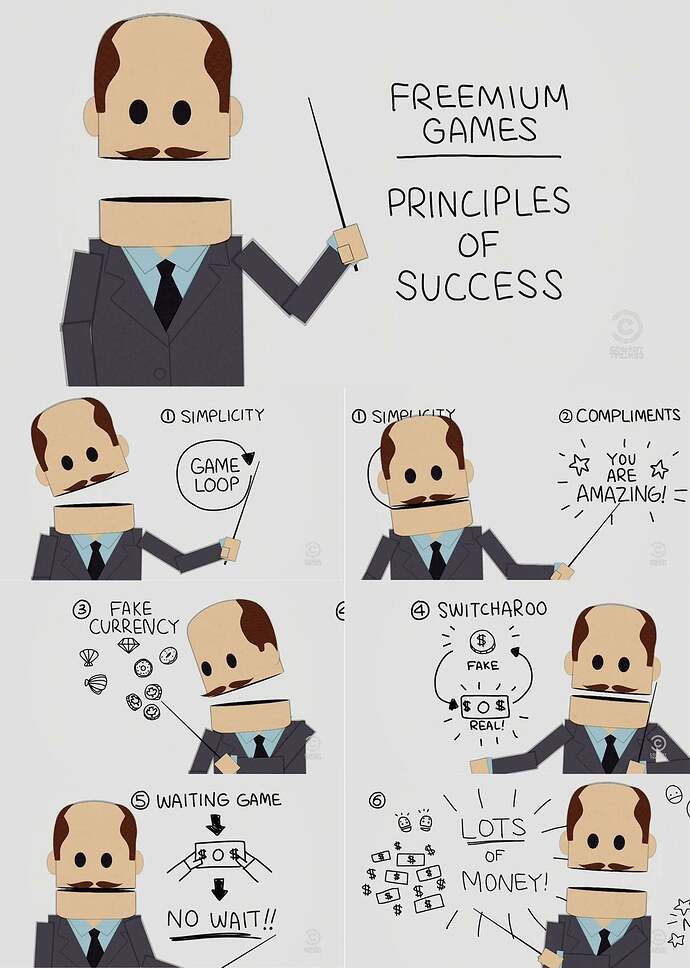 This is a pretty uninformed viewpoint of an actual psychological condition that is in no way limited to children or the unintelligent.

FOMO is something that businesses have studied for the objective purpose of manipulating people into paying more.

It is very similar to fast foods being researched to have ideal proportions of salt, fat, and sugar in them to manipulate people into craving them and wanting more.

It is an extremely predatory practice and significant in the business world. Dismissing it as childish doesn’t demonstrate you to be enlightened, rather the opposite, it shows a lack of knowledge and understanding in something real and serious.

If FOMO is really an issue, I think it comes down to the individual and not the company behind it, if you really can’t live without paying money for that shiny new sword that doesn’t offer any additional benefits to what’s already in game for free other than a unique vanity item you can show off for what? Bragging rights? To show you’re “better” than other plays because you paid money to get a certain item that some others might not be able to? That’s on YOU as the player, that’s not the company manipulating you, that’s YOU manipulating yourself, if money is really an issue then don’t buy it, show some self-control, some willpower, if we wanna see Conan Exiles survive and keep its employees and servers up and running they need the steady regular flow of income, at the end of the day they’re a business, you can still pay the price for the core game and get everything you need to play and STILL be on the same level playing field as those who choose to pay for the battle pass and bazaar, nothing changes, it’s literally just vanity items you’re paying for, nothing pay-to-win.

Unfortunately, you do not represent the entirety of the human species. There are people with various mental health conditions and vulnerabilities that make them especially susceptible to business practices targeting them. It’s not the well-off, strong-willed people in control of themselves and their lives who need protection.

someone mentioned that some countries are actually regulating or passing laws to stop FOMO? Doubtful

As far as I know, they’re to stop introducing real-world gambling in video games, especially those marketed for minors. Gambling problems are very real and ruin many lives (again, people who are less fortunate than you) regardless of age.

If you have a real fear of missing out on a digital item in an online fantasy game…you might want to re-evaluate your life’s priorities.

And in a perfect world with perfect people, this would be the easy solution. But unfortunately, at least around here, mental healthcare (especially preventive mental healthcare) is seriously under-resourced. So people with actual issues don’t receive the help and support they’d need, and the all-too-common attitude you represent isn’t helping.

I work for a foundation that helps people with all sorts of challenges in their lives, from unemployment to mental illnesses and substance abuse. That has helped me broaden my perspective and understanding that not everyone is as capable, with such mental fortitude and self-control, as you or I.

So is what you’re saying that video game companies/businesses such as Funcom/Conan Exiles who probably very much need a steady income to thrive and survive to keep their servers and updates continuing, should and need to adjust their sales strategy to fall in line with those with “mental illnesses” who can’t help themselves but become slaves to the FOMO/Gambling mentality? As I mentioned in my previous post, that sounds like a personal problem that needs to be addressed by the individual themselves, I don’t believe it’s up to the company/business to compensate for the “mental illnesses” of those who have yet to seek control of their own personal condition.

There are different business models to choose from. Some companies conduct their business responsibly, taking into account the environmental impact, as well as ethical marketing strategies. Then there are companies who claim to care, but hide their unethical practices behind bureaucracy and obfuscation. And there are companies who don’t give a damn and exploit their customers, their workers and the environment as much as they can.

Curiously, recent studies suggest that the last-mentioned business model does not necessarily provide the most profit, especially in the long term.

It’s entirely possible to make a successful, profitable marketing strategy without exploiting those in a vulnerable position. Many very successful companies world-wide are able to operate both profitably and ethically. I hope Funcom takes that route.

Are you able to elaborate? I don’t want to have an argument here but instead a healthy discussion/debate and hear your viewpoint, how would you if you were in control of Funcom/Conan Exiles business model make changes in a way that both provides a steady and profitable income to the company but also in a way that we can stay afloat in the long term and at the same time compensate for those who struggle with these mental health issues?

Allow me time to see how they’re planning to implement this “Battle Pass” first so I can comment from an informed standpoint (and not just the teasers we may or may not have seen, but the full model in action). Who knows, it might actually be fine and promote a healthy balance of gaming and spending. I’m by no means opposed to that.

Sounds good, I agree too, let’s wait and see how the livestream pans out and continue the discussion after that