I did not receive any 10x battle pass rank modifiers on any challenges today.

My only problem, is the different value of battlepass on different platforms.
In epic games it is converted to the currency of the region, in Steam it is in Dollar.

I did not receive any 10x battle pass rank modifiers on any challenges today.

I’ve had this problem for days now. It worked like a charm at the beginning, and now I’m having the same problem tons of other players have reported.

I’ve seen that bug reported multiple times and I’ve even reported it myself, despite having seen it reported and acknowledge, because it really bothers me.

There’s stuff that I actually want in BP rewards, but I’m sure as hell not paying for it just because the system that should allow me to earn them in-game doesn’t work properly.

I’ve seen that bug reported multiple times and I’ve even reported it myself, despite having seen it reported and acknowledge, because it really bothers me.

Greetings Exiles, Due to unexpected behavior, the following functionality will be paused as we work on a fix: Battle Pass Bazaar Challenges Crom coins purchases We will update this thread once we have more news to share. Apologies for the short notice and thank you all for your patience.

I’ll be working up a test case later (unless someone beats me to it), I suspect post-patch one will need to complete all low challenges, then restart the game to re-cache the opportunity for higher modifiers.

It’s weird. I have never once had the problem and I am at 60 now.

Also got a wonderful tip (and I’m embarrassed I didn’t think of it sooner) and that is for the Dungeon legendary challenges. All you gotta do is spawn and kill the boss. No need to even enter the dungeon itself.

At least now I know for the next Battle Pass.

Thanks! I haven’t seen that, and I might have missed it otherwise

Hopefully, I’ll log in after work and finally be able to enjoy the challenges the same way I did before.

All you gotta do is spawn and kill the boss. No need to even enter the dungeon itself.

That’s good to know if I ever want to do things that way. I have incorporated the challenges into my day-to-day loop and having fun with them. I would hate to have to drop into single-player mode and admin my way through them, but it’s still good info for that contingency 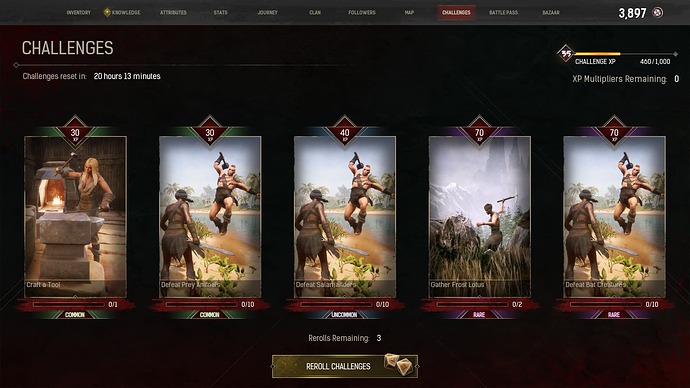 Hello guys
I reached level 60 too now and am thinking about purchasing the battle pass.

Do all the items work? Are some of the armor pieces still bugged?

Cause I won’t pay anything for items that are broken.
Thanks in advance

I think it’s worth it. The arcane windows and doors alone make it worth it but you got armor sets, horse skins, and that curio…Oh that curio is very very nice.

The only thing that I see at issue right now is that FC live account stuff isn’t always connecting to the game session and so you get times where you aren’t “entitled” to the stuff you earned and the only way to fix that on our end is to log out of the game and back int again to try to get a stable link to their servers that are managing the new digital ownerships.

If there bug they will be fixed eventually.

Buying it and getting the rewards should give you your crom coins back, so you can buy the next BP basically for free lol.

Which platform are you playing? Everything in the Battle Pass that I’ve tested so far (the tall window and door frames, both horse skins) has worked just fine on PC. Didn’t check the armors yet, but planning to craft a Gurnakhi armor for the next thrall I train.

I’m playing on PC as well.
I think I saw a post a week ago, where the arm and leg parts of two battle pass armors were invisible.
But…I can’t find it anymore

no Idea what the title was.

Edit: Thanks to your post I found another one, about the Gurnakhi armor.

Wait so you want me to pay money for a subscription that gets me nothing except access to new fetch quests I have to grind to finally get something…in a game so broken people are duping bombs? LOL

When you reduce the quality product at the same time you start trying to milk it for more fast cash…that’s not “Companies need to make money”. That’s greed.

Or was Funcom losing money? No? Then none of this was “necessary”.

Usually in almost any other industry, when a company wants to make more money they have to offer something new. Only in video games does a company seem to be able to endlessly repackage, remonetize, and rerelease their existing product while that product becomes increasingly more outdated, unstable and broken. Only gamers tolerate this.

Imagine if a car dealership took older cars that were starting to break down, slapped some new paint on them, and started selling them for the same price as new cars.

I know, I know…“Car dealerships need to make money”.

In my opinion , this was the best and most well thought thing u now have in store.
For me it absolutely worths the money i paid.

The only thing i found as negative was the illusion items… they exist in game… Worthless.

If a new item was given (to spice things up, could be an atlantean sword skin - so players can illusion their preference sword, WITHOUT OWNING the dlc), or some discarded armours/weapons from dlcs that did not made to final cut (lets say 5 slots in battle pass should make an illusion armour set that is unique). Not giving the recipe, but giving 5 pieces that can be used to illusion already possesed gear).

Other than that a great execution was the claim system… This way i could for example make the vanish potion be claimed by my pvp character, since it would be useless in my pve server… So great thinking there . Also the nice thing is that i get to try it before going into sorcery! And could help even newbies or freshstarters to get a peak and some of the advantages of sorcery , but not the consistency (which belonged to the ones that worked fir sorcery and unlocked stuff and farmed to have what it takes to apply it with consistency).

I did not liked the half finished items on the battle pass … like wight horse skin that was not worked to have a saddle slot visible(even though i consider it a bug and that will be fixed in the future).
Upon that the untextured sacrificial knife was lame … how on earth u missed that detail fc??

I am pretty happy with rest content. Only thing i would change would be to restrict ios challenges to ios map (meaning i would restrict ALL ios xhallenges to appear only when i am on ios map (i believe easily made with a simple filter upon loading them)

What i also liked is the new addition to vanilla set of buildings, especially rims which can add up on almost any dlc (thus giving me a good reaso to grind for them , as they can be used nicelly with all dlcs i have purchased so far… i would like to see more of this content added in future battle passes .

The arcane curio cabinet was also a great thinking… 200 slots in a storage space for me means i have to redesign my entire base!! Less placed objects for what i now have… So my 4 chests of steel reinforcements will be one cabinet instead of 4 chests… Nice thinking and execution…

The multipliers that were saved is also a nice addition!!; Made battle pass procedure look NOT a grind! U had no time to do them today? Its ok ur next day playtime would make up for u!!! So another great thinking!!! Personally i would prefer the “gap” between normal exp gained and the multiplier one to be closer … for example instead of 40 -400 ( without and with multiplier) i would like it to be 150-450 (without and with multiplier) . This would make me gring normal ones also easier (as now non multiplied ones seemed not worthing the effort of doing …)

One more thing that was also nice is that all placeables/statues we got in this battle pass was same theme oriented(all arcane ones) which also was nice!!! So u grinded for completing a set ( and this made the grind worthing a bit more as it was no random pieces)

Price is great. And i will be honest: i gathered all crom coins and now ready to unlock next battle pass upon release!! But due to effort of stuff i see beeing corrected (watcher recipes returned, my aesir recipe also returned and numerous fixes) the money that i will not spend on next battle pas (and perhaps a bit more) will go in ur store…

Well, personally i really like what i get from BP, but, its not compared by content\price with old DLcs…
No full building set (arcane)
No full weapons set
To many lvl wasted on torches\paints\illusions\1 used potions
Armor, decoratives, emotes, mounts are totally fine…
BIG prop to the art team, some models are stunning

So yes, BP is NORMAL but still lacking of content…

Biggest downslide is bazaar prices (8 usd for 1 banner*)
ANd new 3.0. restrictions (unable to loot skin gear until you buy it) - rip pvp\raids\clan shares\trade

I must say, throughout my whole Battle pass I didn’t see a single Siptah-exclusive Challenge while I was playing solely on the Exiled Lands map. I own the Isle of Siptah expansion but didn’t log into Siptah during the season.

Yes, there are challenges that are considerably easier to accomplish on Siptah, but at least I didn’t encounter any that would’ve required me to log onto Siptah.

Did you have a different experience?

The only required ones would be map exclusive challenges like visit the goblinoid layshrine.

I trust you as a player and while your posts are not unusual, they’re providing the final amount of fuel to push me over the edge. This is something I won’t participate in. BP, Bazaar, any of it.