it’s not design by committee

and thank everyone from Crom to Asura, hell even that sick bastard Yog, for that.

Well, since I’m already ranting about feedback and game design, let me expand a tiny bit on that.

Every time there’s a major change to something in this game, the forums get flooded with posts from people with very loud and detailed opinions on why that’s wrong and how, in detail, it should have been designed better. And every single time I see that, I remember the words of Satoshi Tajiri: 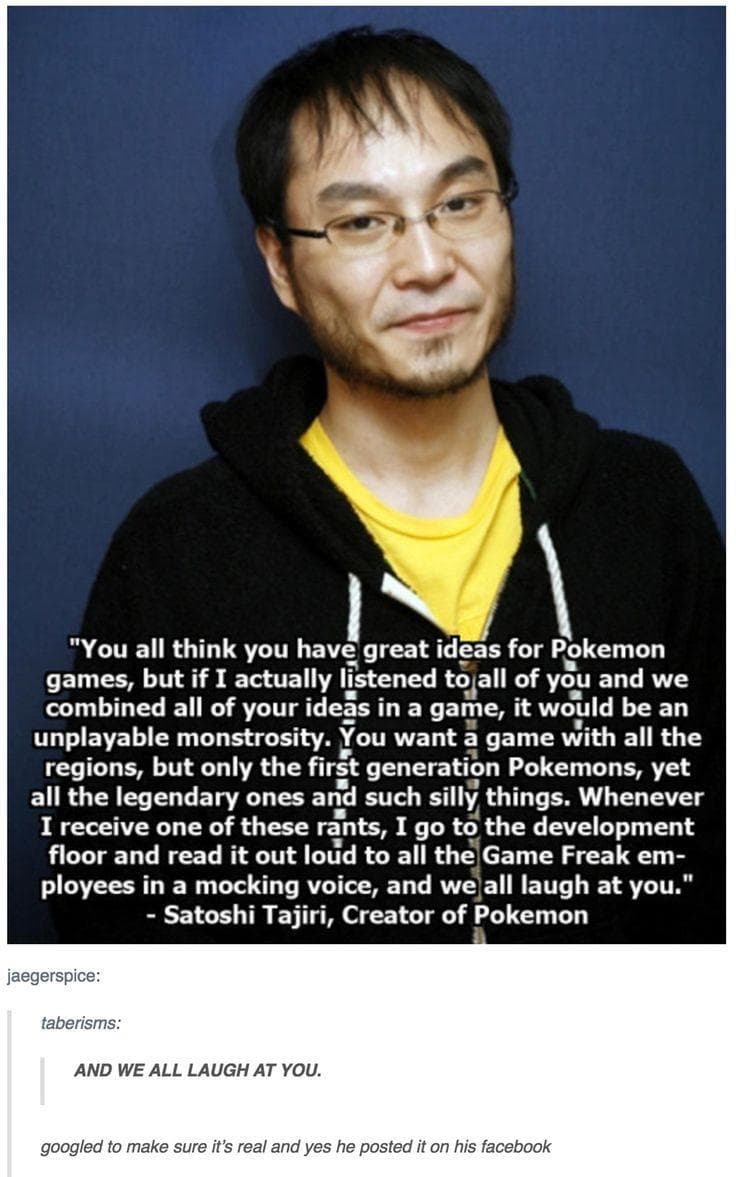 Don’t get me wrong, there’s nothing wrong with posting your opinion. And that opinion can be as detailed as you want. We’re all free to post our wishes, hopes, and even armchair game feature proposals – Mitra knows I’ve done all of that, even that last one

As long as it’s all in good fun, it’s all fine. But expecting all of that to be taken seriously is unrealistic. And getting bitter when it doesn’t? That’s just counterproductive.

But for the record…bat mounts are now a thing!..temporary and dangerous but still a thing

let me put it the easy way! copied directly from THEIR patch notes…

Attribute bonuses from Weapons, Armor, Potions, Elixirs, Food, Warpaints and other similar gear have been removed from the game and

with stat bonuses and effects.

replaced is the key word… REPLACED with what? noting?
tell me which stat bonus and effect was replaced in shield of zawbeth?

Well, yeah. Some people just have a weird definition of “listening” when it comes to game design. It seems to be “do what we want”, where “we” really means “I and people who think like me”. Like I said, the only way you can get that is to make your own game.

For the rest of us, it’s pretty clear that Funcom does listen, because the things they release incorporate a lot of player feedback. They’ve shown this over and over again.

but i got no answer to my question buddy

anyways i think that this thread is trying to focus on me not liking the update , rather than get some constructive opinions about the overall nerf that “will not be listed and that we will have to test each piece”

i hope the devs took the point (if not please contact me via PM so i can explain) there is no point to continue this thread.
@Mayra u may proceed to close it please

but i got no answer to my question buddy

Best I can say is its a typo. I got the same sort of “wha…” after reading that when i saw the Wak video first saying hand gear gets nothing but hey we are all human so mistakes like that happen.

I believe there will be an update to the BB tools. As with legendary weapons, they removed the attribute bonuses, but didn’t replace them with any other kind of buff. I have to believe this is a complete mistake.

That said, the primary reason I use BB tools is because of the oils. Oil timer is contingent on the durability of the tool. The higher the durability, the longer the timer, the more resources you get per oil used. I almost always use oil when farming brimstone, crystal, and hides for tar. The yield makes the BB tools with oil worth the effort IMO.

I have to believe this is a complete mistake.

orrrr they ran out of time and will fill in that gap later. Way early on (like right after the first dev stream) I noted that all of the gear will need to be reworked and thought that it was very aggressive to believe it can all be reworked in the timeframe of Q3 release…I’m imagining I was right and so somethings are just left…empty for now.

Yea, I can very well see them not fixing this for 3.0 release and patching later. I am still hopeful though that this is indeed a mistake. In another post I made, there already was low incentive in farming legendary weapons, but now there seems no point whatsoever, other that cosmetic or adding to a ‘collection’ (or doing it just for doing its’ sake).

That said, the primary reason I use BB tools is because of the oils. Oil timer is contingent on the durability of the tool. The higher the durability, the longer the timer, the more resources you get per oil used. I almost always use oil when farming brimstone, crystal, and hides for tar. The yield makes the BB tools with oil worth the effort IMO.

oes it really matter whether tou 10 chest of stone or 11 ?

it could, for a pve perspective, it will take less time to fill a chest with Black blood tools than it does to fill it with starmetal tools, i am one that really appreciate shorting the time of the grinding rocks , trees, pelts brimstone or anyuthing, reason why i use the oils? whats wrong with that?

they could just state this. i would be with them on this. this is tottally acceptable in my agenda

I think you missed the point, after level 60 itnos basically just the rich getting rocher, especially on pve. So why argue over 450000 or 495000 stone lol.

Because my latest character’s base took approximately 720000 stone to build. 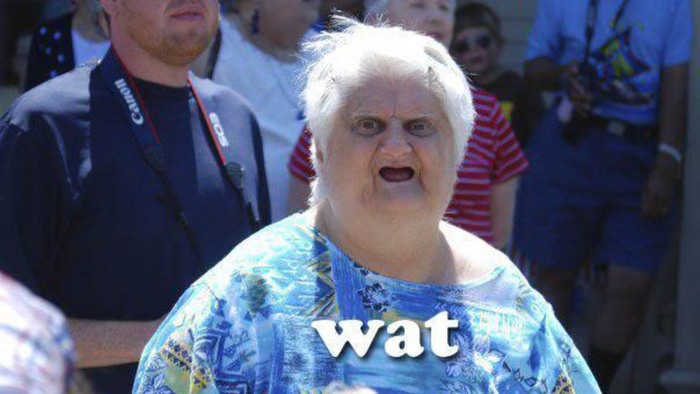 700×394 274 KB
By the way, I’ve never noticed the bonus what +5 survival adds. As Jimbo said (if I remember correctly), survival is non-existent: as an attribute, it is good in big numbers. As itself, sub level 30 it is there, beyond that, not so much.

I do not find repairing my stuff a chore, it is what a good fighter does: NEVER goes into battle unprepared. After every adventure, I repair ALL of my armor and gear with kits, or with materials. If I go to a long journey, I grab some kits to repair the lowest durability items if needed.
I see that bringing kits with you is a problem in PVP since they weight a lot, but I fail to see why repairing is a chore. Removing durability from game would be extremely stupid. Don’t be lazy guys, just take care of your stuff. Not hard, not that time consuming. You don’t have to stop completely while 1-2 items are being repaired.

latest character. Still arguing about being rich in the game. A game where on pve there is no real chalenge you HAVE to overcome to build. Building in pve is pure aesthetics. You can technically build only work stations and no walls and still play the entire game. So arguing over a small difference seems dumb to me, when it is such a none factor in the overall game loop other than time.

you meant 450k vs 570k rocks? cause the difference is about 25% without oils if i use oils, that can go close to 1million rocks, (given that you have plenty of fragments to burn.

so yes, i think you are missing the point here, we are talking about less time farming or grinding. by using the right setup.

So arguing over a small difference seems dumb to me, when it is such a none factor in the overall game loop other than time.

so please explain how is that a small difference? using the 450k example it is 120k more rocks in the same time, or about 25 % faster to get the same 450k rocks, so yes the difference is not small at all,

A game where on pve there is no real chalenge

we play for different reason, we like to build structures and have a more relaxed less drama game time , yes there is no PVP, you know there is a very large part of the game that plays without your sense of competition, i also believe pve public to be larger than pvp./ (i heard this a long time ago, i am not sure if that is the case)

Building in pve is pure aesthetics

when it is such a none factor in the overall game loop other than time.

The whole BiS about black blood, Star Metal, Obsidian is like reading Billionaires argue over if you use more gas in your G5 goin 50000 feet or 51000 feet. Foes it really matter whether tou 10 chest of stone or 11 ?

Having done a lot of make-believe – I mean RP – stuff in my free time on various PvP servers, getting Black Blood is a good thrall leveling loop. In fact, it’s worthy of constructing an outpost for that purpose. That you could eventually acquire a full set or two was a whole lot of entertainment, and ultimately led me to fights with other players thinking the same. I think it’s that they can be acquired.