Just curious, i’ve been having an issue. If I die (using javalins), then when I pick them up and put them back in their slot (say slot 1) it bumps it to slot 2 and removes a javalin… if I die multiple times I get more and more of these ‘black hole’ quick slot spots.

Anyone else encounter/know what to do to fix this?

Place all your stuff in a box, place a bed role and remove the bracelet. Some of this issues get fixed this way.

is this on a server or single player?
and are you using mods?

because there is a very popular mod, that can cause this very thing.
unfortunately if it’s caused by that mod, you’re borked.
rolling back to before the mod or starting a new game is the only fix

@droch, I’m on a server (not official, friend runs it), no mods, nothing. Just vanilla game… so I was just confused.

If bedroll kill/yourself doesnt fix it, It can be frustrating.

I had to toss one character cause they had a unmoveable item that weighed 10units. Wouldnt drop on death, couldnt be hotkeyed, tossed in a chest.

Had this a few times, thou not always weight issue. 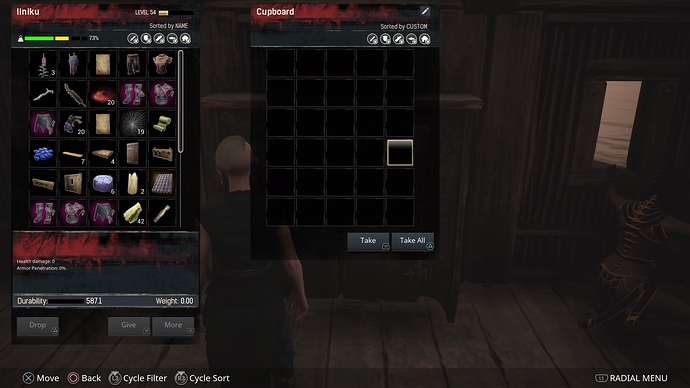