Lost all loot and Character while transfering.
When I was importing my character error happened and kept trying but it just showed new errors so I restarted the game and I was going to try again but there was not a import option so I went back to the server I was transfering from but my character was gone and I couldn’t import it either

had same problem 4 hours ago… lost all 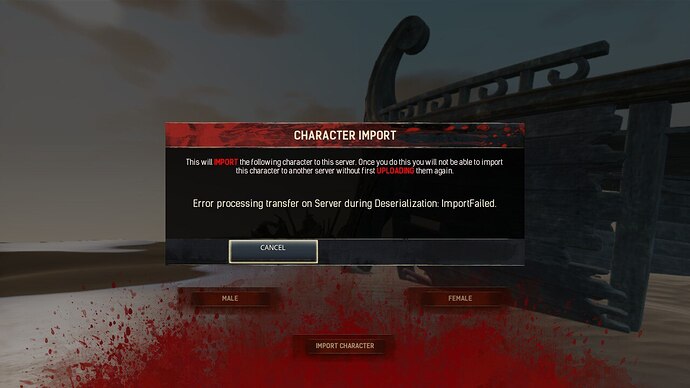 error-sortesol1280×720 98.7 KB
and now my other transfer failed too, seems like they have closed transfer, but only the import part… not export 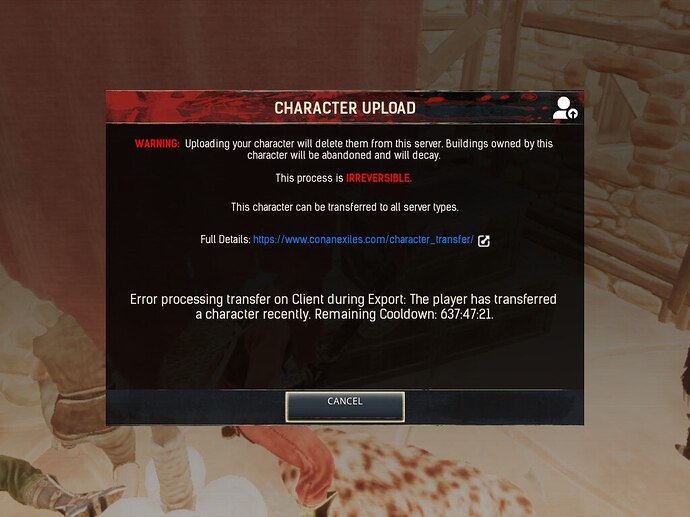 A clear and concise description of what the bug is.*
I loaded up my alternate character with lots of loot transferred off of server 5027 with no issues I went straight to server 6204 to retrieve my character and it said token failed and returned me to main menu. And now my character has disappeared with no transfer options at all.

lets hope funcom can help us
already made a report for Zendesk, but as the import is set to 637 days… i guess they have already noticed the error

Hello, do you have more information about this issue ? Same problem today, i lost my character ?

the error happened to me when I went to enter the server, this forum seems to not care about the problems, they tell me to enter Zedansk, but I didn’t see anything there where it was possible to report😥I want my character back, he is old and has a lot of things learned and has valuable items

Send a message through this forum to @Community listing the character name, server the character was on when you uploaded, server you tried to import to, and Funcom ID.

Thank you for tagging us @arktara. As of recently, we started asking players to submit a ticket via Zendesk. @Boss this link should take you straight to the form: https://funcom.zendesk.com/hc/en-us/requests/new

Apologies for any inconvenience this might cause, and thank you all for your support.