Hello,
Since few days I tried to build, but some bugs are bothering me…
When I try to put constructions in places where it is possible, the game shows to me that it is impossible. Sometimes, if I built all around to return to the same place, it can walk. But I use then many materials pointlessly that I then have to destroy (because it does not serve me).
Today, I try to put a trapdoor. Cf screenshot.
I don’t want to destroy my house just to by-pass the bug… have you solutions to put this trapdoor? : (
I had already put it here, thus there should be no problems. I destroyed it to be able to change direction by putting an other one… 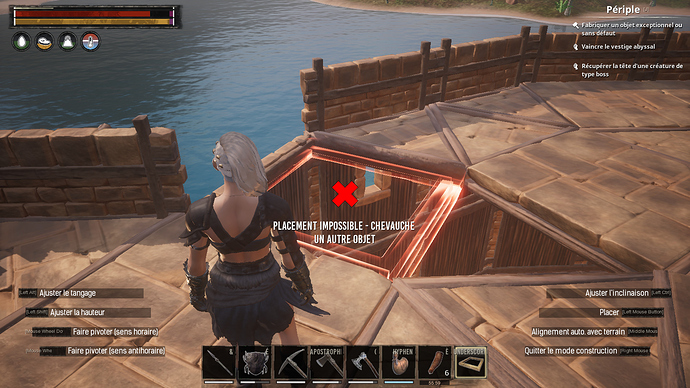 Wtf is the logic to that : XD 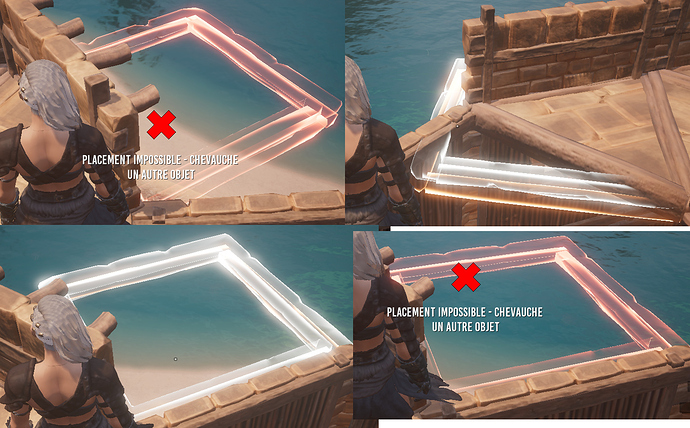 Is the stability fine? Sometimes its just a single part missing more of that.

which stability ?
and you can see on my latest screen : right and left screen are the same thing but “possible” and “impossible”…it’s the exactly same place ! xD

in fact, since 10minutes of “impossible”, it was possible during one second to put it exaclty where i want but the “possible” dissapear too faste…

This is a long time bug. Never been fixed.

I’m trying but it doesnt work…

Removing nearby fences is sometimes necessary. If its not that, I dont know.

Remove all doors near been thought of yet?

There are no doors…

What ? I hadn’t delete it xD

I know the Fences can collide , like if you toggle the outside of that fence it would prolly fit.
Not implieing thats a good thing btw.

Sorry, I withdrew my post regarding the left structure maybe being a door frame+door as after I wrote it I found I could zoom further into your screenshot and then could see it was a wall

It sprang to mind as I recently destroyed a dozen building pieces trying to upgrade sandstone to stone brick only to realise it was a door preventing the upgrade.
Any chance that the level below has a door frame on any of the four sides?

Okay, i broke a fenced and it became ‘‘possible’’ during few seconds…I take my chance and I put it finally !
Thank you all xD