Can female characters please get a feminine run back?

I would argue that the Modders and the Developers of this game complement each other. They each do what they do best and all of us players benefit from their efforts. I don’t play much on modded servers as I prefer the vanilla experience I, however am impressed with much of the modders work and I do enjoy the developers efforts with the game itself .

Sidenote: I don’t do compare the two as I think it would be an unfair comparison to make. Modders don’t have to worry about maintaining the game as a whole, being concerned more on the parts they want to tweak. The modders also have great freedom on what they produce and not a company or boss to please and follow. To many modders, modding is a hobby to developers, however this is their livelihood and that can make a profound difference.

All mods fail with each small/big update. Such good modders, especially when don’t contain data-stealing viruses or devastating malware.

If I understand you correctly , I think this is incredibly unfair to modders as they have to follow the programming of the developers not the other way around. I know that modders and developers sometimes speak to each other, but there is some coding things that developers can not give to the modders and schedules that don’t always mesh between them. Unless of course I am mistaken in my information and understanding of the matter.

How is that modders always do better job than a full paid devs?

You do realize that the modding tools are provided, set up… and essentially made by the devs right? A lot of the new tutorials for things they add to it usually also come from them… While some of them are constantly working on improving the capabilities of the devkit.

All mods fail with each small/big update. Such good modders, especially when don’t contain data-stealing viruses or devastating malware.

Nope, not all of them… there are like 2+ year old mods out there that work flawlessly… It has very little to do with how well they’re made or how old they are…

In short… the game evolves and changes over time… and during updates sometimes things change in the background that aren’t apparent, while other times it’s really apparent…

Take the attribute system for example… Any mod that affected those will obviously be broken after they put in a new system with different attributes that are calculated differently… Or the building hammer… they moved construction there, so obviously mods adding building pieces also had to move them.

That’s it essentially… there’s no “magical reason” they need to rebuild their mods after every update if it doesn’t rely on any of the things that have been altered, sometimes they might still do it just to comfort people lol… have a new more recent “update date” on the page.

The difference is the freedom and the level of entry requirements…

well working in cgi industry i can tell you that new animation are not at all done by experienced animator.

previous animation were state of the art (especially the feminine one), premium quality, now no more.

well working in cgi industry i can tell you that new animation are not at all done by experienced animator.

previous animation were state of the art (especially the feminine one), premium quality

Okay?
Hmm… I wonder what professional criteria did you judge them based on? Whether they’re doing a “sexy” walk or a “monkey” walk?
What if the purpose was to give them a monkey walk… in which case the previous sexy walk would be completely wrong?
What if they’re made by the exact same animator?

What if it indeed IS a bug and it’s accidentally using an animation from one of the grey monkeys?..

It look like they wanted to make their job easier and merge both male and female animations. It look horrible either way.

Don’t worry all. You’ll be able to purchase the old female animation set from the next Bazaar rotation for 1375 Crom Coins (regularly 1890).

I would gladly pay to get the old animation back, everytime I use a weapon or torch, I cringe. It is like I am trying to carry a sack of potatoes under each arm while I have a 2x4 strapped to my back.

I rarely play as a female but gave it a try on my den PS4 and all the female swagger is gone. I don’t get it, and I hope it’s an “option” along with the confident and sexy original way. This is a subjective thing based on my general desire to represent myself in Conan Exiles as myself.

As I said earlier though, I think we all should have access to a walk style, male or female. I prefer a posh stride. #givemewhatiwant

That is funny, because I just built a little outpost by the Den, since my old base there decayed, and I brought you along, and was wondering if the thrall looked anything like you, lol.

Similar to the toon I used for my 5 tips YT video, facially. The NPC is shorter, stockier and bulkier. I’m satisfied, and he cracks me up. I’d have chosen the tallest of the builds, slimmer and with slate-grey hair. I have noticed this with my female character. Is it possible that it has something to do with what the character is wearing and is equipped with? I run equipped with heavy Aqualonian armor. I did not see this happening in my game. The weapon does not appear to affect the stance or how the character runs/walks.

Has anyone actually tried different gear to see if this changes anything?

I have not seen that when I run with a weapon in hand, single or two-handed.

The old animation, the female avatar kept her arms at her sides, and an even movement of the legs. The new animation, once you equip a weapon/tool, her arms immediately go out from her sides and she swings her hips in a manish fashion when trotting.

That sounds very strange from an artist standpoint to me. Is center of gravity taken into account when programming the movement of the female form ? 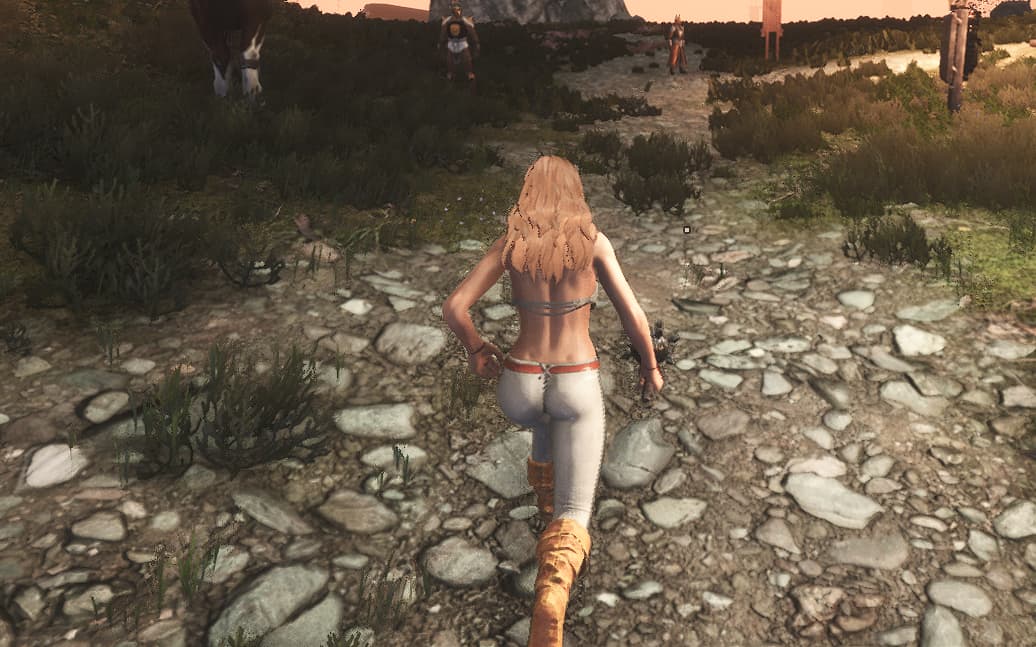 Here is an example, elbows out, arms bent at weird angles, running like a man. I guess it will take getting used to, like the running up the stairs weirdness. Watch yourself doing that from the side, its very awkward.

Than why devs can’t fix basic graphical bugs? Yamatai warlord armor is bugged since 2021 of October, the Aquilonian Black Dragon armor and the Argossean Marine armors also bugged.
Either they can’t or not willing to fix them.

Light armor medium or heavy, all of them having ghoul/imp animations when running/sprinting etc.
Armed or unarmed, two handed swords spears, shields or dual wield, the posture and the movement is a disaster.

I cannot answer!
I am not arguing with you my fellow exile, we always see in each update years now some old bugs rolling through time

. I do understand your despair, I am on the players side, so sometimes I go desperate too

. Especially the climb bug is killing me! But let’s keep it on topic, we don’t want the flagging system to close this feedback conversation.

I am with you

, please let’s keep it on topic and civil