Can someone explain this? Why can't I build this here? 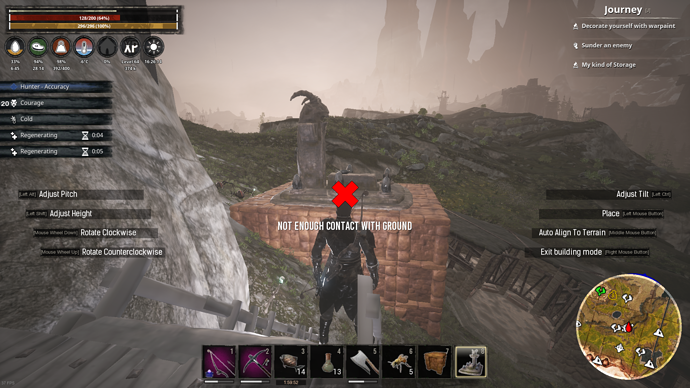 Spin it, shift it up and down., ensure foundations are all the way down, place a few columns and ceiling tiles to mirror the foundation footprint and try again.

You are not standing high enough! Yes, lol, you have to look down at the temple more, and the placing is easier! At least 1,5 to 2 wall heights!

as you will be able to upgrade your altar to tier 2 and tier 3 , it will change in shape ( and for some altars move a bit from their original positioning , for example jebhal sag will move a bit forward ) so i rejoin narelle with the other row of fundations since it will need it for tier 2/3

Yep. As Narelle and Kanza1 said, building a temple/shrine requires extra free space around it. Once you’ve placed the shrine, you can dismantle the extra rows of foundations around it. (Just be careful if you do - people have reported that upgrading a temple to a T3 version sometimes makes it disappear. I suspect it’s because it would need this extra invisible footprint that makes placing a T1 shrine so difficult.)

i dunno about pc, but on my ps, some of em wanna be off center. its annoying to try to remember what ones need to be in the mid of a foundation and what ones wanna split between 2. >8[

The Ymir altar is like that too. It doesn’t want to sit on the line between two foundations, or vice versa. It’s been awhile. But it has prevented me from placing some temples right in the center. They always end up askew.