Anyone know the mechanics of this?

Bit more clarification needed . Do you mean the map room? Or the new sorcerer circle ? Or is it something else?

Per the build menu: 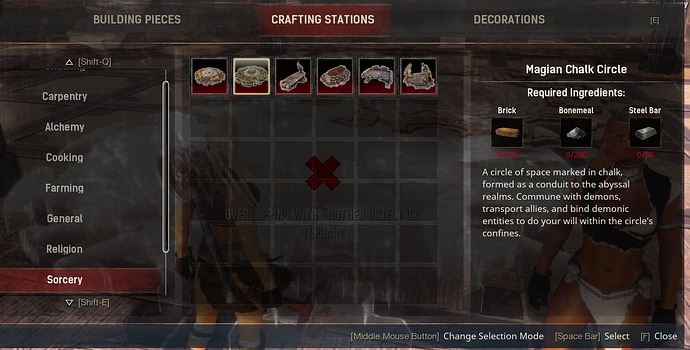 Text is misleading , you cant transport players , you can summon demons , your dead body and items such as armor and weapons. Its just a retexture from the circle of power.

My guess is that it was originally intended to work as the transportory stone as well, but was later changed… though the text never got updated.

Text is misleading , you cant transport players , you can summon demons , your dead body and items such as armor and weapons. Its just a retexture from the circle of power.

It could be that the Circles just have stale text.

However, “transport allies” speaks more of a consensual action, similar to other games where a player can accept a transport from another player.

The Transportoy Stone speak directly of individual interaction for transit. The circles indicate shared interaction. While I agree the mechanic is not implemented, this does not appear to be a case of one thing replacing another.

Yeah well , maybe in the future they will add that feature to the circle

Would be nice to have a way to teleport a follower from a distant base to the circle. Consider being targeted by a Purge; in the 10 minutes preparation time you could teleport a number of high-level thralls from another base to defend the one being targeted.

True!
I believe however that this ally is your dead body!
When you die your body respawn correct? So you have 2 bodies on the map, one alive and one dead. This dead body may considered as an ally body now and you can transport it!
Maybe!
Another theory is that maybe you can do the same with clan mates bodies in pvp, but i never used it in clan so i don’t know if it’s possible! It would be really cool however to die and until you respawn another clan mate to summon your dead body in base!