Does a tank really have this much range? 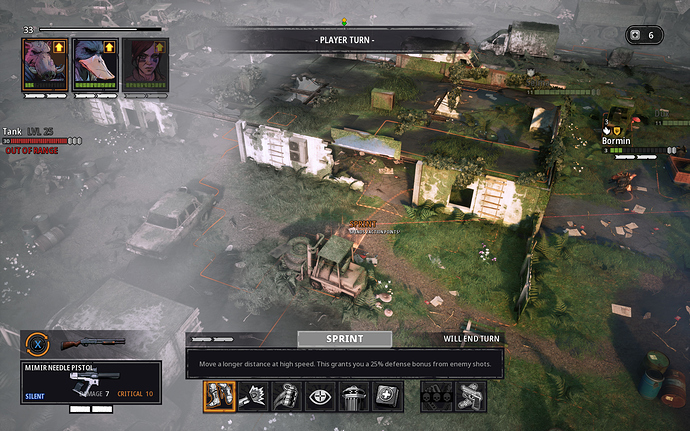 He hit Bormin from THERE.

What I would like to know is how tank can use Hog Rush and still take a shot and Bormin end turn after Hog Rush?

That’s their innate ability. Like how Pyros have unlimited firebombs. Or Shamans can call in backup. Ghoul powers don’t have to map to mutant powers one-to-one. Tanks aren’t mutants, after all.

BTW, Bormin can do it if he uses Run n Gun.

I reached this thread having encountered the same problem, the same tank sniped me at about 16 range (In this image it looks like 18).

It uses a Gaper that has a maximum range of 8. What skills and attachments does it have on it?
They literally have no weakness if they also grossly outrange you. How are they designed to be taken down?

I found it cool that im my playtrough, they used Hog Rush to break walls in order to remove obstructions(and fire) or knock my guys off high ground.

If you use Magnus’ lightning powers it will stun a Tank for several turns, for example. You can also use smoke grenades to make your team more difficult to hit.

It seems like a bug. Whenever you posses one you can’t even get half as far as that when you try using it.

Just made it through the game yesterday (got the game on friday) and with tanks I had some issue as they:
1.Have incredible range
2.Knockdown comes back before my character gets up again

Effectively stunlocking them.
It leaves little counterplay once you alerted the enemy. If they aren’t alerted taking out med bots (with emp) and shamanes (pyros if possible) if around and than bunkering down in some sort of high ground works.

I do however have to also note that Heavies have some odd behaviour, knocking down stuff midfight that has no value.