Something🍌RP
The first and only EU based voiced RP server that is fuelled by bananas!

Season: Unga Bunga
Just as the dawn of light has been seen by cavemen’s first rise…or the other way around, this server is currently in its baby shoes! Meaning everything’s set up so far and we’re learning how to walk. The very first season may be a bit chaotic, time will be spent on balancing constantly and of course, creating more content but we sure hope it will bring in a lot of fun.

So what’s the deal?
Basically the server sprung out of the idea that idly-standing around kind of RP is boring and not really what our few people wanted. After a while of going on about how adventures can be had in RP servers but mainly the issue of politics and drama is in the foreground, we decided to get a server, pull a finger and work on changing that. So fundamentally you’re supposed to go on adventures with other players. Sure, you can still build, craft and come together, in fact it’s encouraged to work in a group because most late-game items cannot be obtained by sheer solo-player grind.

So in that sense, the server focus was on RPvE yet, RP situations can create PvP situations too which will be seriously interesting. Making the Server a RPvPvE in general.
Now, I don’t want to smoulder your eyeballs with boresome text any longer, so here’s a quick rundown on what we offer.

5 Custom Player Professions harmonizing with each other. Mostly

Purely Player-Driven Economy (Okay, there’s a bartender in the Faction hall selling basic food and booze but apart from that and Roger, there’s nothing so you build the economy)

Purely Player-Driven Teleportation Network (One Teleporter pad is set and that’s in the Faction Hall.)

Have an active say in the development process of many things (For now, since we’re in the first boots here)

The RP Basics like AHDS, IQOL, EE and more!

EEWA! Because late game content that goes even further beyond 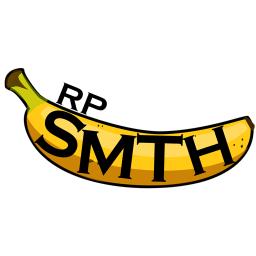 The only voiced Conan Exiles RP server in the EU fuelled by bananas! | 6 members