Fangs of the Red Mother and other imbalances

So, today I killed the Red Mother, and was surprised by this 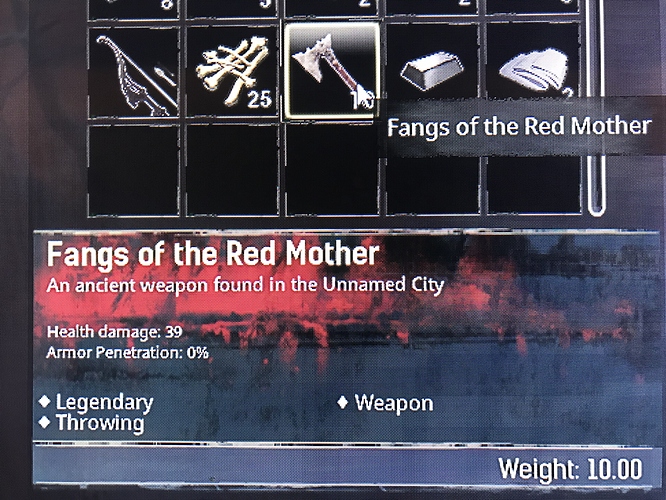 While I think this is very nice because I use Sword/Axe throwing, I imagine devs didnt pay attention to the dmg, being legendary it should be higher than Serpentman, or at least, infinite if that dmg is intended. 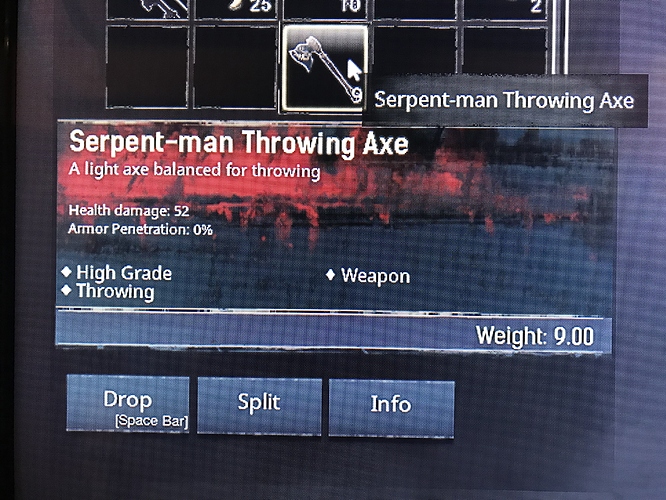 As you can see, Serpentman Axe throw dmg is way higher than the legendary Red Mother drop, so its use becomes obsolete, as the Serpentman is much easier to acquire.

Also, I would like to bring in this post again about the imbalance of the Sword/Axe throw combination against other weapons, the hyperarmor on heavy attacks is often interrupted mid fight, making the life of those who favor this combination a lot harder, I hope FC adress that.

You’re right, when using Axe/axe the hyperarmor in heavy attacks perform normally, no interrupts, same with the Mace/Axe.

I dont believe the sword gets interrupted because of the status effects, Im pretty sure it is bugged because its the only 1h weapon that gets interrupted, so its an imbalance. I alteady reported this some months ago with a very detailed explanation about all weapons, it seems FC likes to ignore me. -_-

Probably not at the ignoring point. I do believe they have a lot on their plate. I try to stay pretty active in the forums looking at issues and questions and just being involved. It is a daunting task sometimes, and I don’t have to do anything about it. I can only imagine the constant barrage of issues that they are faced with. Hope it gets to the top of the list and sorted out.

I haven’t ever had a problem trading with 1h swords yet. I can tell you, however, that if you put an axe in your offhand and dual wield, you lose most of your hyper armor if not all of it. That’s why dual wielding maces and axes isn’t viable at all in pvp because they aren’t fast enough to stunlock before another weapon’s hyperarmor kicks in.