As you know, we’re working on adding mounts to Conan Exiles. You may also know that we’re adding mounted combat, so you can crush your enemies and drive them before you using weapons from horseback.

What you may not know is that we’re also adding a leveling system for Pets and Thralls (collectively called Followers going forward). Please note, this is only for Thralls and Pets you can place out in the world and have follow you, not crafting thralls.

The upcoming leveling system allows you to to level your followers through combat in the same fashion that you do as a player. Leveling a Follower grants them stat-points that are automatically distributed through a weighted system (see below), and these stats grant various bonuses such as improved health, improved damage, and so forth.

Stats for Followers are based on what you might expect in Conan Exiles: They use the same stats as a player; Strength and Accuracy improve melee and ranged damage; Vitality determines the health of a Follower, Agility grants a bonus to armor, and Survival reduces the effects of negative debuffs on the Follower. Endurance and Grit are not used for Followers, since no-one wants to have a Follower that all of a sudden runs out of stamina mid-fight and has to go and have a lie-down, hilarious as that might’ve been. 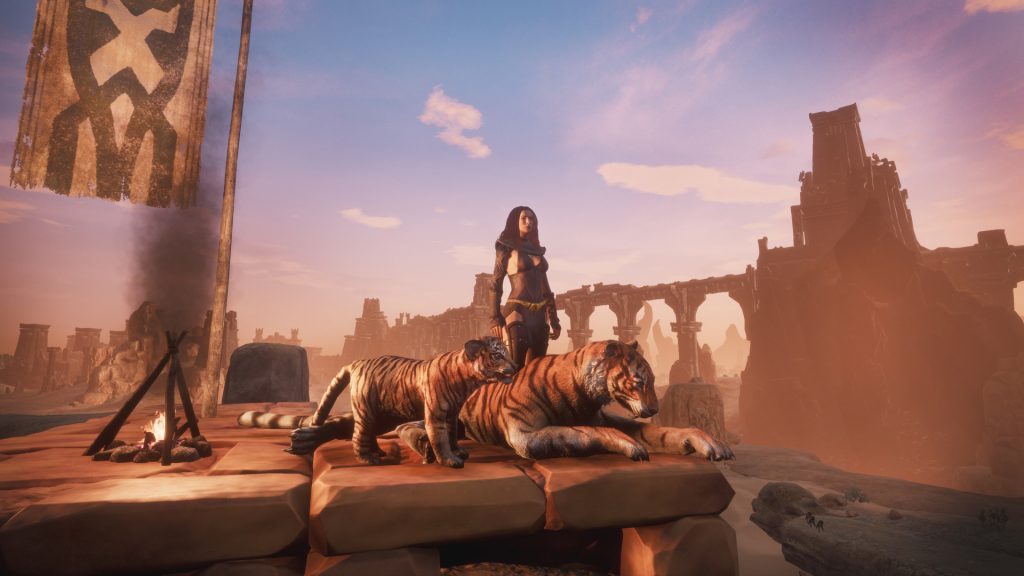 When placing a Follower, they have a base level and base stats. Different Factions and Tiers of Follower have different base stats and base level. As an example, a Darfari Follower will typically have more Survival, while Votaries of Skelos have more Vitality. Higher tier humanoids (Fighter III for example) may start with even higher stats. Stats are also affected by worn items, such as armors and weapons.

These stats inform secondary stats, such as damage, hitpoints and resistance to debuffs in the same manner as they do players. All the effects from stats can be viewed by inspecting your Follower with the radial menu and selecting “Info” from it.

As mentioned before - Followers have a base level. They also have different learning curves; some may level slower or faster than normal. You will need to find out which of the factions and races that level the slowest/fastest yourself. However, it should be said that the slower a Follower levels up, the more powerful (on average, given the variance of growth curves) they become. 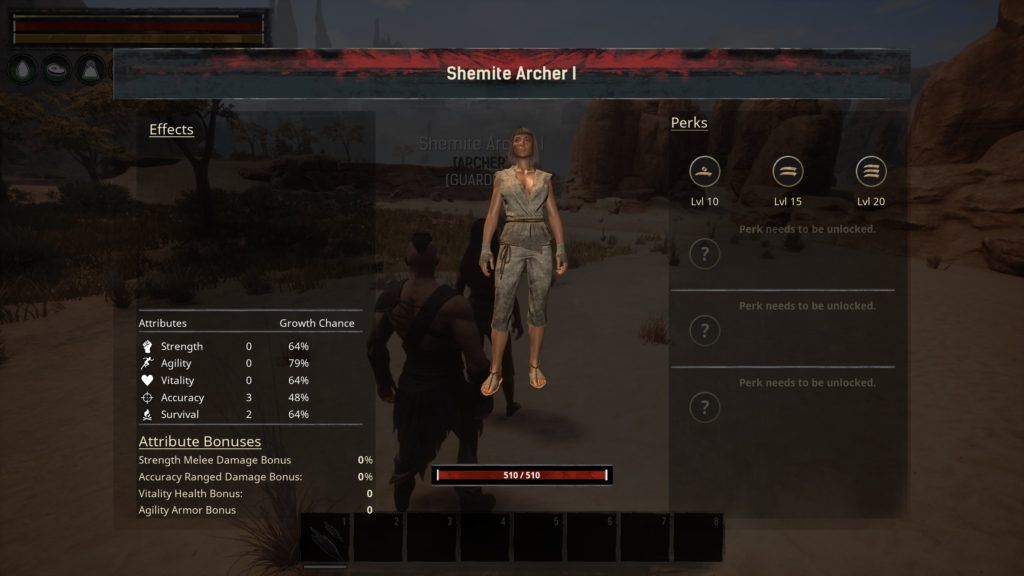 The maximum level for a Follower is currently set to 20. This is not to be measured up against player-levels, as Followers gain more points per level than a player.

How do I level up my Followers?

Having your Follower come with you and being a part of combat will award them experience points in the same manner as your character would normally. Crafting, Exploration and other activities will not grant your follower experience. Easy prey like Hyenas are ideal for a newly obtained Follower - although you may opt for a more risky approach and take your newly hatched Spiderling to the Unnamed City. It’s risky but if you’re careful this strategy may work out for you.

An important note here is that your Followers only gain experience points while they are following you. You will not be able to post your followers in a circle around a world boss and just wait things out.

Your Followers have a growth-curve for each stat, represented as a percentage value. This is how likely it is for the stat to level up when your follower levels up. This growth-curve is largely, but not always, the same throughout factions for humanoids/races as for animals, but you may find rare outliers that will prove to be extra useful. Keep a look out for that extra rare super-ostrich and get your own Battle Chicken!

The growth-rates make it easy to see if you really want to keep your new Follower or dismiss them. 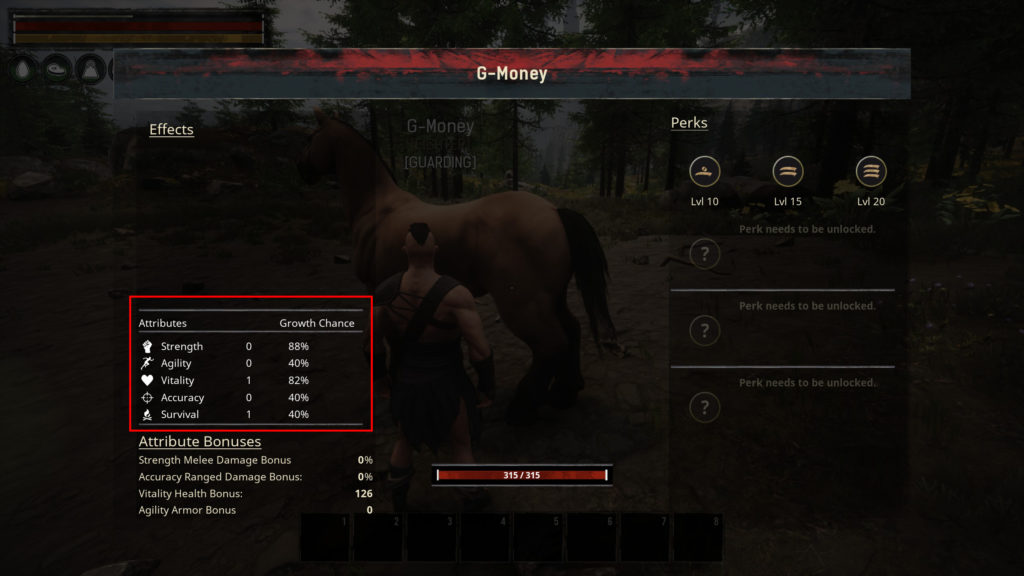 You can dismiss your follower by using the “Break Bond” command from the radial menu. This will immediately remove the Follower from your employ - no more dragging them over to the Volcano in order to watch them die horrifically in lava (although if you are in a particularly nasty mood, you can still do this, of course).

Followers may gain perks as they level up. These perks further enhances the capacity of your Follower. The more specialized the perk is, the more bonus it will grant. Followers may have up to three perks once they have fully leveled up.

What will happen to my old pets and thralls?

We have been wanting to incorporate a leveling system for Followers in Conan Exiles for quite some time, but the timing has never been quite right.

With the implementation of Mounts, we felt there was no better time to implement this system than now. Finding super-rare followers will now be a more rewarding experience, as you can now nurture them further and make them stronger by taking them into battle.

In short: We wanted to have a system that is interesting to dive into while also making each individual Follower more special. 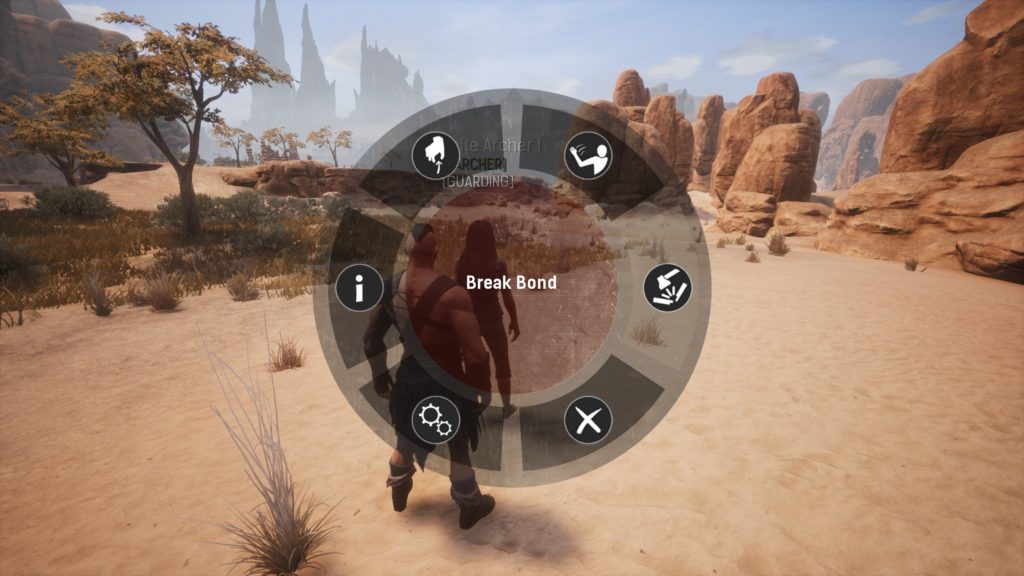 The leveling curves, base stats and growth potentials are all fully moddable through tables. There will be a guide available for modders on what the different aspects of pet leveling and growth are.

Thralls and Pets will become a limited resource going forward. Specifically - placeable combat thralls and pets. You can still have as many crafter thralls as you please. When Follower leveling rolls out the Follower limiter will also be set in place. 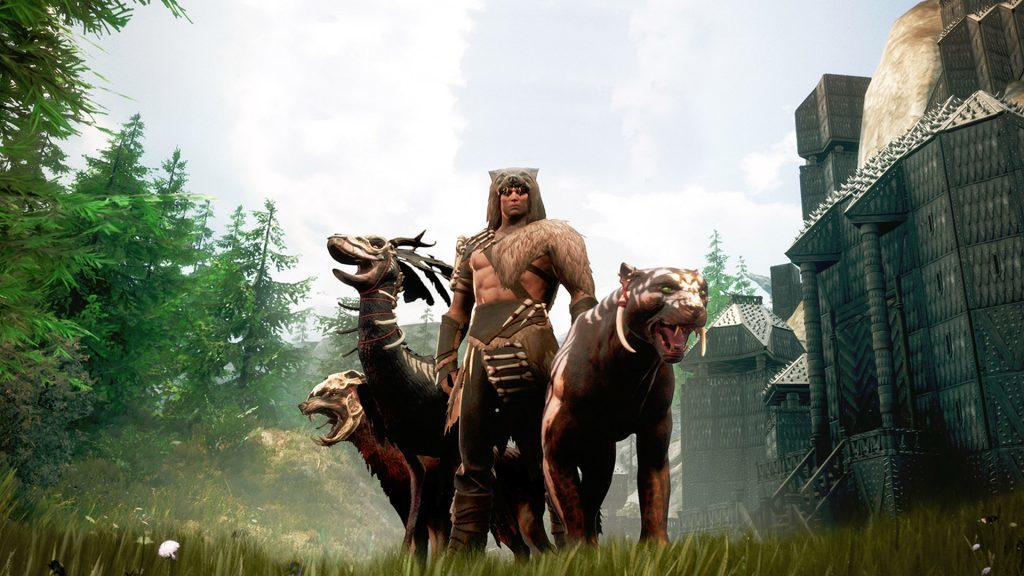 Do note that these numbers are not final, but largely represents the growth of the cap we want.

Is this the case for private servers as well?

Partially - private servers MAY opt to use the system if they like but it’s not mandatory and is part of the server settings. Your server admin may allow a bonus of 400 thralls per additional clan member if they decide to use the Follower limit.

What happens to Followers already placed when the patch hits?

There will be a grace period where you can use to Break Bonds command to dismiss old followers before we turn on the limiter to automatically remove old thralls. The length of this grace period is still being discussed internally, but we will keep player feedback in mind when setting the length of time.

Since we need to implement a limit for followers, random followers will be deleted periodically until the cap is respected. We recommend organizing any thralls you definitely want to keep before the patch hits. We are not able to allow you to keep “legacy Followers” that go over the Follower limit (let’s be honest here, no-one should have 400+ Followers strewn about their base as a means of lagging out other players).

We are doing this for multiple reasons, first and foremost of which are reducing lag and increasing server frame-rate, especially for consoles. In addition to this, a limit like this will make building enormous landclaim areas more difficult to defend, which is one of many steps we intend to take towards solving problems with sieges and PvP going forward.

Join us on our streaming channels on Thursday at 5pm CET / 11 am EST / 8am PST where we will go into further details about the new Follower leveling system and the limiter mechanic.

Please direct any questions you might have about the leveling system and the limiter to this forum thread and we will endeavor to answer them on stream.

On Tuesday, we announced that we’re rolling out Attributes, Perks and leveling for pets/thralls in a future update. You can read the full announcement in this post.

The TL;DR is that this new feature will make individual thralls/pets more powerful and also makes engaging with them more rewarding.

At the same time, we’re implementing a limit on how many thralls/pets you can own at once. The details about this limit can also be found in the post we linked to above.

Naturally, a lot of you had questions about pet/thrall leveling and the limiter. We addressed these in a livestream on Thursday, which you can see below, but if you’re not able to sit through an hour-long video we’ve posted an FAQ below the video. You can also check out Multigun’s thorough summary of the stream in this thread.

FAQ about thrall/pet leveling and limit:

How many pets/thralls can I have following me after this update?