Horrible FPS in the Broadcast instance

What in the world did you do to the (final) Broadcast instance? The FPS in there is 3-5. Three to five! That’s the kind I get in a crowded Agartha or 40 man raid, not a private instance.

What did you put in here? Is it the audio?

I had crappy framerate today in the whole game.
Don’t know if connected.

This is not even the fight, it’s as soon as I enter the instance.

I did not experience any problems doing the Presenter and got the three achievements in one go, but at the hourly Jack raid I had severe latency issues all day long.

Edit : I repeated “The Broadcast” this morning and according to the in-game fps display, I never left the 28-38 fps range while inside the Presenter instance. (That it didn’t go above 38 fps in there is a little strange though)

There’s a lot of fog in there, so setting Effects Detail to 3.8 instead of 4.0 might help. But you probably already knew that.

This is me standing still outside the instance in BF. 33 FPS. 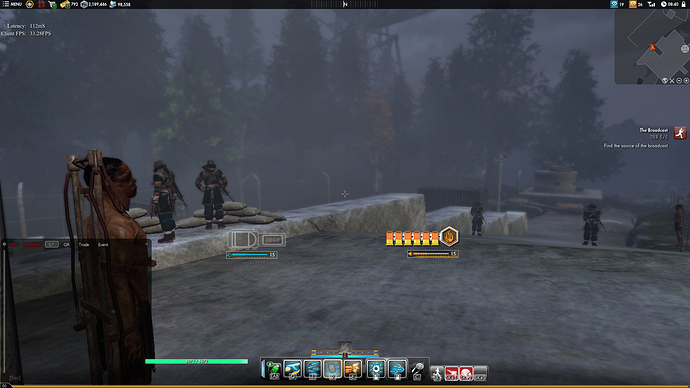 This is me standing still right inside the instance. Doing nothing, in a mostly dark room. 3-5 FPS slideshow. You did something wrong Funcom. And I would not bother with this so much were it not for that I need to do a fight on Elite 5 alone to get an achievement, and with even less FPS when that starts it’s nigh impossible. 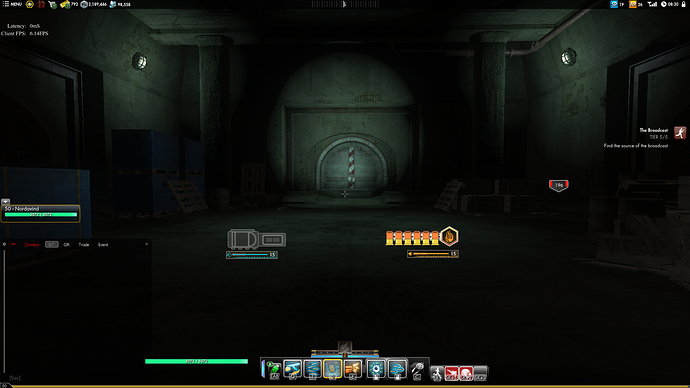 Right outside looking the same direction you did in that screenshot I had 107-110ish FPS but after stepping inside it dropped to 60ish. Obviously that is not a problem for me but it shows there is a distinct loss of performance not related to your computer hardware only. Unfortunately seems it results in a very uncomfortable situation for someone with a low FPS to start with. 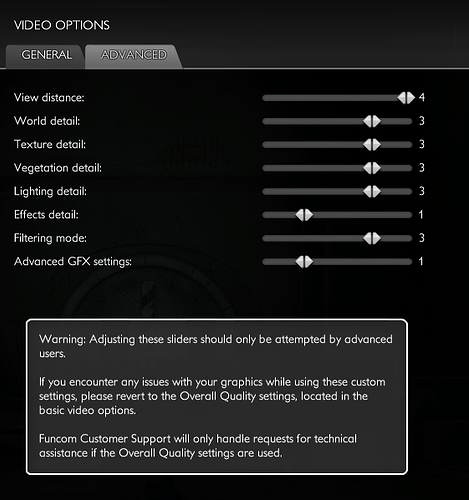 Thanks for more data points. It’s good to see (well, not really, but you get what I mean) that this is not something just happening with me.

I hope they can isolate and fix this.

Also, I’ve tried all the tricks in the book when it come to improving FPS, and none seem to help the slightest.

My FPS outside the Lonely Patriot instance hovers between 68 and 95 depending on which direction I’m looking. Within the Lonely Patriot, my FPS was in the 20s the moment I stepped inside, and it stayed that way as I was fighting the Presenter and all the way until I exited the instance.

That’s an extremely low frame rate. That doesn’t seem normal to me for that instance. Could you please open a tech ticket with us? You can do that at help.funcom.com/. We’ll be happy to help you troubleshoot the issue.

You do see that 3 others also experiences a loss of frame rate in the instance. My extremely low frame rate is a product of having a low one to begin with.

I’ve pulled all the tricks for increasing frame rate from playing TSW/SWL since 2012. Nothing helps.

Hi I have a terrible computer that’s struggled to play TSW/SWL over the years since 2012, I’ve made multiple changes to get it to work better but finally I’m at a point where I probably just need a new computer. Can you guys please fix your problem?

I tend to agree. It’s something in the instance itself that causes it. I still get playable (20+) frame rates inside, but it’s a noticeable deterioration compared to almost anywhere else in the game.

Yeah, I guess I didn’t really notice because this game’s framerate is… well, all over the place. I only get 45 FPS in the instance.

See, now you are making up stuff.

Me having the knowledge for improving FPS over the past 6 years does not mean I’ve had the need for it. Have I used the tricks when we had events like Super-Hel? Sure. But from day to day gaming, out in the open and in private instances? No. Also, you can see that some in this thread experience a drop of up to 50 FPS by simply entering the instance.

Also, not the same PC I started playing TSW on.

So, make yourself useful and contribute with data (maybe you get no drop at all, that would also be useful to know) or find some other place to be a douche. Ok? Good.

I gain maybe 1-2 fps from dropping all settings from 4 to 0.
Sins of the Father instance on the other hand runs at 120-130fps

To be fair, starting a tech ticket with you, or any of the others who experience a drop, might give them more data to work with. Data they won’t get from this forum thread. If not everyone experience the same kind of drop, there is a good chance that it is something in the game, in combination with your specific specs, that causes the issue.

Personally I run low DPS when im doing good, usually around 25-30 fps. I see the same fps inside. That said i have had some nasty Latency spikes, mostly when there are a lot of adds present.

Then again, I have generally had some nasty latency spikes over the last weeks time, as well as a memory crash of sorts. Crashing is very rare for me normally, but currently it can happen several times a day.