I don't know where to post ideas I'm from playstation

Any ideas. I don’t care about the ending of a game like Conan Exiles, let alone if the game gives you the freedom to do what you want on your own in co-op. but someone asked me if the conan had an end. I replied that the first map is yes and the second one is still in development. And although a final boss would be perfect, but not just any boss should be a giant colossal monster similar in size to Jhebbal sag, Cthulhu, Kraken. With difficult but understandable mechanics, that when defeating the monster the reward is exquisite, satisfying, glorious. or a satisfactory ending but with the sacrifice of a player or slave of a certain level so that the others follow a feeling to the game that catches it’s the end of your story. that you have to be armed to the teeth or have a specific weapon team to win the dungeon. the most difficult final boss of siptah the second in command everyone wants his head for me it attracts me a lot as a consumer. The layers: they are synonymous with power. I would feel very special in a cape. They can be plain, with gold designs, with armor pieces, shoulder pads, or torn. enchanted weapons: they could have the same animation as the weapons at the beginning of conan exiles, they would be enchanted temporarily and with new effects and buffs and not just any weapon level. there are selestial metal armors but not with their own design of the same weapons. The wolf armor for me is from another world and there is no other like it that I have seen. I like the skins of certain weapons but the two-handed ones, for example, chaos and evil, which are similar, have very little variety of skins. The translator sometimes changes what I want to express. there could also be a blessing from all the gods in the game to temporarily resist the final boss’s attacks. in the end they are ideas nothing is mandatory.

It could be a boss for half the body. We fight on a platform with a ground, stone or Eldarian setting. while he attacks us with his limbs and air, fire, illusion or darkness abilities. When you defeat the boss, the health bar reaches 1% or 10%. Try to explode so that all dungeon participants die and the boss resets. unless one participant sacrifices for the others, either slave or player, and the player who dies would go to conan’s promised land after death, where she was valeria when she died with the same brilliance.

the blessings: they would be inside the dungeon or outside of it. But inside it would be very good, they would be unlocked by defeating the enemies and they would be scattered throughout the dungeon. Imagine that of Derketo, an altar with a statue of Derketo holding a stone bowl with a purple or violet light coming out of the bowl towards the ground or a purple flame that by drinking it or taking the flame gives you the blessing of the derketo. They must be highly protected even with magical shields or corruption. It would be great if the statue, when finished killing enemies, would pop out of the ground like siptah’s weapons when pulling a lever. It would be nice if when taking a blessing the character looked very different with lights, flames fluorescent tattoos or runes with glowing eyes. that show that he is blessed. haha just ideas.

Enchanted and cursed weapons: I had in mind to use some specific weapons, like swords or javelins, when they were enchanted they changed the appearance and the stats used spells from the tome example enchant sword with earth magma cast the enchantment and then the character stabs the sword in animation the ground while there is a crack in the ground of lava and fire that complements the sword. When attacking, it would have simple animations, it would have no effect on other players’ structures, but it would do a lot of heatstroke damage, burns, and I thought the tip of the sword with the lava would be a whip of fire and lava for a while. limited, and at the end of the effect, the weapon will be destroyed. Similarly, with lightning, strike the sword or javelin up into the sky and the lightning strikes it upon completion of the spell, the darkness causing confusion and making your enemies fight each other for example. the final boss of siptah his corpse would become a throne trophy, a weapon or a spell learned to discover. 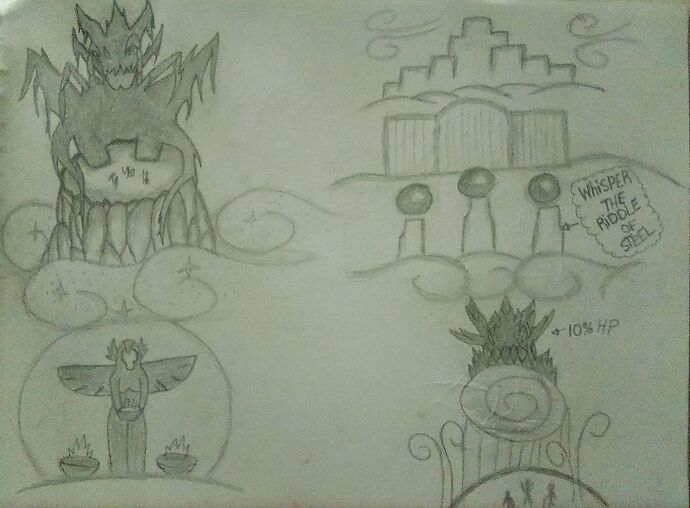 the final boss would have a small cinematic of its history. and the kinematics would be the key to fight him. It would be amazing if Conan would guide us at certain points in the dungeon. the end.

the secret of steel is a reflection of life, not a recipe metaphorically.

Hello Lucidique help. Tell Funcom to do this.

I know it will never come true, no one pays attention to me. Hahaha

I love this thread

Thanks friend, I had already thought that something is wrong with this. Hahaha.

You actually have some gems in here. I dont know how to make it work, but I’m thinking about it.

The translator doesn’t help me either, but if you talk about ideas, I have many. So many that I wouldn’t know where to start.

Thank you for helping. I didn’t know you liked my ideas. if your target is magic they might be, there are spells that use bags for example weapon spells that use certain weapons instead of bags. they would be destroyed by a power surge, for a limited time. The most difficult thing would be the animations and effects and their programming. Aria deals damage as volcanic lava that does not damage structures or heat shock. If your target is the boss, he could use ground slams with his legs or limbs to deal damage like the elephant or sons of Dagon, but repeatedly with certain pauses so that when you jump you can dodge or roll at the right time. The boss wouldn’t move much due to the size of it, but it would have abilities. Examples: when creating darkness, he launches minions for the illusion snake-men to attack us or a similar created enemy. Hitting them makes it disappear. lava worm throws fireballs. His wind attacks are caused by his jaw sucking in the air from the environment like a vortex and lightning. when dying the player does not know that he is dead. Knowing that he was going to die, the boss overloaded a vortex in his mouth with lights and some lightning bolts to either explode or launch a final attack to reset and kill everyone without knowing the mechanics. If your goal is the final paradise, it could be the whisper of a spirit or the wind that tells the riddle of steel. And in front of you there are three pillars to choose from, choosing the right one will open the doors, otherwise a poison punishment, an explosion that is easy to dodge but deadly or the answer is somewhere on the map and you have to write it on the pillar. I’ve seen players try to defend themselves with green light magic. I think the spells would have evolutions or faces, for example face 2 of the green light when casting. Absorbs your enemies to disrupt their mobility. For players, it would be easy to turn towards the ground to escape. does not deal build damage and will activate for a short time.

The boss fights sound like a cool thing to add. Probably has to be done ground up so modding it sounds hard but not impossible.

the satisfaction of finishing your Project will remain forever. remembered by every player who faced your creation and overcame your challenges.