I seriously would be happy…

I seriously would be happy if you would just remove the STUPID “show enemy health bars” option. I mean, it’s pitch black in the dark and all you have to do is turn that in and you know where your enemy is. It’s trash.

I like this feature. It takes away the obvious advantage of ESP cheaters.

It’s stupid. It would be okay to make it appear if I injured you in a fight or something but to have unavailable just because you’re close to someone IS A CHEAT. I had a base where I was hidden in a floor and they found me ONLY because of this BS “feature”. It’s stupid in its current form and in ANY other game it would be a “hack “

Read? I watched the developer stream live and one time after. What are you referring to?

I think he means this:

That’s a cool recap but I’m trying to find out what that has to do with the “health bars” feature. lol 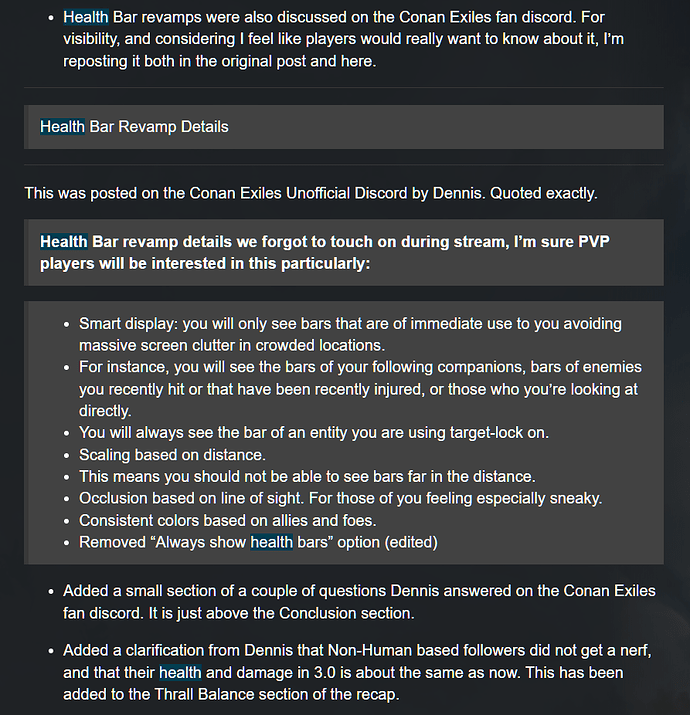 Ahhh. Thanks. I didn’t even see that section and they certainly didn’t discuss it in the live.

Yeah, that live stream was more like a general introduction.

In the real world we can often pinpoint people and other beings by sound. In games, unless we have a very good sound system and a game that is built to use such a system, we can only hear that something is close, but not the direction. And the sense of smell is completely neutralized in games. I take the health bar as a way to transform other sensory input into visual feedback to compensate for the lack of a full sensory system.

Like in The Witcher game series, Geralt’s sense of smell is represented by a color in the air so the player can follow the scent.