Is this typical of a named thrall?

Does this usually happen or is this guy trolling me because I left him in a wheel too long with nothing but pork to eat? 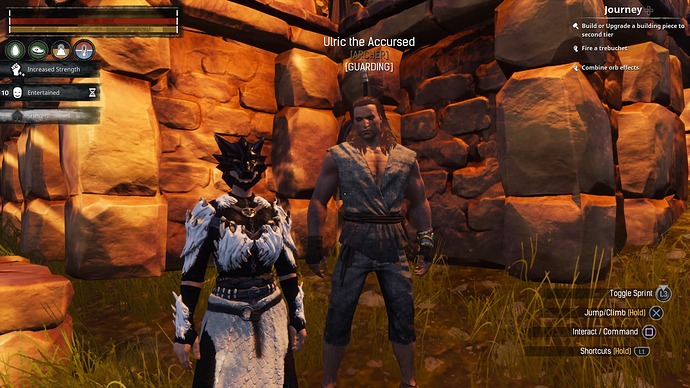 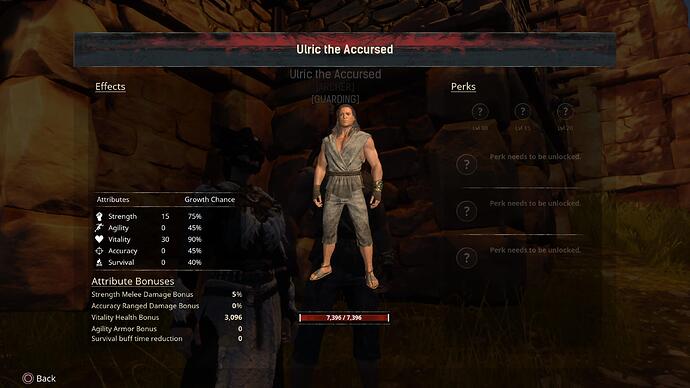 Incase someone doesn’t notice he is a Archer… I guess…

He’s a fighter not an archer.

He is an archer: Ulric the Accursed - Official Conan Exiles Wiki

@SabunoHakia What is the problem with him? I can see you got unlucky with the probability of getting points into ACC when he levels up.
He’s gonna be a healthy bastard, that’s for sure.

Well if you look closer it says archer over his head not fighter. That’s why @SabunoHakia said it. Yet @Foggy you are right, he is a damn good fighter, but if I am not mistaken they were fighters not archers isn’t it? Strange!!
@Marcospt, do you have any memory of this?

No big issues just gonna change his settings and consider this a bummer as I needed a thrall for kiting enemies. Lol

All I know is I need these stats on a fighter who turned Archer so a level of irony.

Also would me have force feeding only pork affected this? I usually use Gruel, but made him cooked pork as I was being lazy, I plan to test this further. An see if the specific foods based on stat growth will affect them during their obedience training.

Yeah, there’s a lot of them. I don’t know the damage multiplier of that one, but if it is an archer, probably it’s lower than the one of a named accursed fighter. Still, if I were @SabunoHakia , I would put a melee weapon in his hands and be done with it.

His strength and vitality from the very beginning is proving he is going to be a good thrall. Playing pve it doesn’t matter that much if your thrall is going to have archer perks too.
I wish you however
Universal warrior
Might of the giants
And
Godly vigor.
For the record I used to feed my thralls on the wheel, lobsters, in the very beginning I didn’t knew how to fix gruel and the only food that was spinning the wheel was lobsters (3 to 4 years back).
I kept this habit and later on that thralls could eat literally everything on the wheel.
RELAX, play, enjoy, have fun

I need these stats on a fighter

I don’t know the damage multiplier of that one, but if it is an archer, probably it’s lower than the one of a named accursed fighter.

People say these multipliers matter but I tend to disagree. Maybe in some obscure math equation but in practice the differences are not humanly detectable. An archer with fighter-ish attributes kills a difficult boss in the same time that a fighter with the same attributes does. Maybe after fighting it for 2 minutes solid the archer would lag behind the fighter by 2 or 3 seconds but you would likely have to average 20 to 100 of them fighting the same difficult boss to get there. Same with fighters as archers. Given a fighter and an archer have the same bow, ammo, attributes, perks and settings, they kill difficult prey or hard bosses in the same amount of time and number of arrows.

Either the multipliers are broken, they’re not meant to be significant, or they are only there to keep the math nerds busy/happy.

It also depends the kind of use you will give that thrall. It’s important they kill fast, but dead thralls don’t kill a thing. They are all a bit dumb, so they will get hit a lot. Now, if you want a follower to kill fast and get enemies of your back while you do everyday chores, vaults (with one exception), camps and so on, try to go for strenght. Rolls are as or even more important than perks. If he rolls several doubles on strenght and on top of that gets good strenght perks, you have a bodyguard. If he rolls on vitality, give him grilled meat. Don’t try to ballance, try to specialize them . Listen, it’s not life or death; that thrall right there will probably handle everything the game throws at him, but level 4 surges are extremely punishing on thralls because they are using truncheons (unless you are able to scout before engaging and, on not finding any npc you want to enthrall, change his weapon). If you want a thrall to help you on those events, then I think it is a good bet taking one with high vitality (and the best armor you can get him). Equip potions, the best you can craft, in his inventory. Wraps work too, but it will take longer. Other than those surges (if you get a calamity surge just frack it and run as they don’t worth the effort unless for the kicks with friends, I guess) very few things on that Island can kill your thrall. Be carefull with the Rockslide, though. They are tough mother…

They make a big difference between tribes. Other than that, they are pretty much irrelevant.

Yes, racial differences seem to span the largest range - all other things being equal.

Yes, an extreme case, for instance, being the difference between an exile or a bearer (most have 0.something multipliers, so they actually lower the weapon damage) and a RHTS fighter or a Cimmerian Berserker with a 2.2 something damage multiplier, for instance. Their damage output can’t even be compared.

When we played Siptah, we had a few Ulrics. As others have said, he’s technically an archer, but we never used him as such. We would feed him gruel, put him in an STR set, slap a Ghoulish Club in his hand and send him off to murder anything that got in his way. With his decently good HP, he never had any issues

Yeah, bearers are a different thing. They seem to be crimpled on damage and way buffed in the tankerly aspects…

I have better luck with bearers being stronger in HP and more balanced growth on all the rest, sometimes they are more specialized to a single state which is nice.

Well I am in PvC and my Beserker has already wrecked a noob because his thrall ran in to my spiked wall to my fishery and I one shot them when they tried to punch me, I felt bad set them up and stole there dyes. But it was funny.

Only time a Archer lags behind is when they need to do a arc shot in order to hit the enemy because there is no straight shot due to allies being in the way. But I have been wanting to use a throwing axe and Archer kiting for some bosses that my berserker can out right solo. Just to make it interesting.