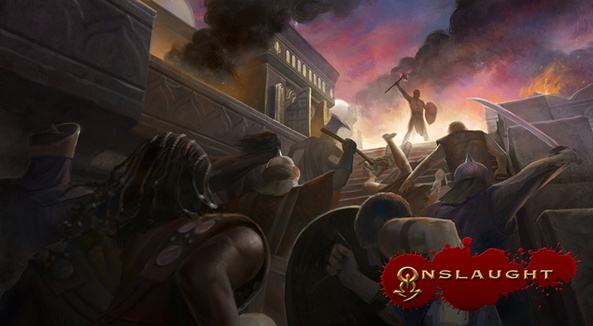 “From horizon to horizon no sign of life: only the sheer breathtaking sweep of the naked desert, bisected by the wandering line of a long-dry river course; in the midst of that vastness the glimmering fangs of the ruins, the columns standing up like broken masts of sunken ships—all dominated by the towering ivory dome before which Shevatas stood trembling.” - “Black Colossus”, Robert E. Howard, 1933

A new face arrives in Old Tarantia, seeking the aid of King Conan and his allies. Known as Vateesa, the Oracle, she brings dire news: The ancient sorcerer, Thurga Khotan, has awoken and marches on the destroyed city of Kuthchemes. His temple, known as the Ivory Dome, still stands; in it, ancient relics of immeasurable power…and the whispers of a slumbering dread god underneath. We trust you understand the terrible fate that would befall the world if a mad sorcerer were to acquire these treasures…

Set at the Ivory Dome of Kuthchemes and the tomb of the sorcerer king, your band of heroes must stand against the seemingly endless hordes of Thugra Khotan. Seek out Oracle Vateesa in Old Tarantia for a new quest, and open the Raid Finder (Magnifying Glass at top-left, or CTRL+R) to find Kuthchemes Temple Onslaught (hereby referred to simply as “Onslaught”). 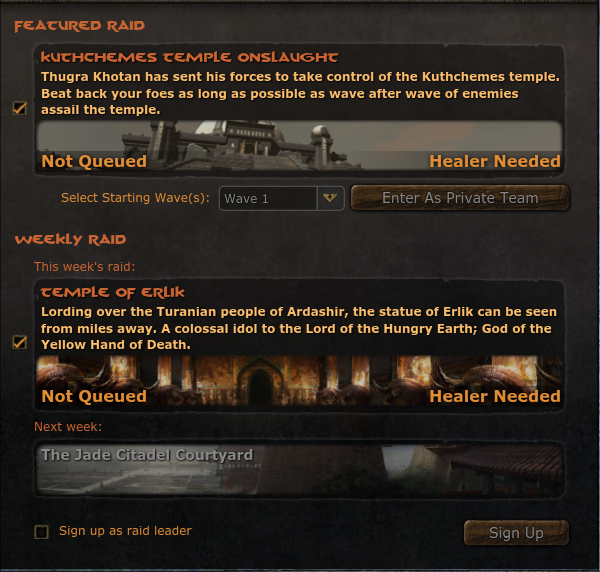 From this interface, you may either queue up for a random group to enter Onslaught, or queue your group in so you can work together. This is what it looks like currently on TestLive; it will be updated by the time Onslaught launches. 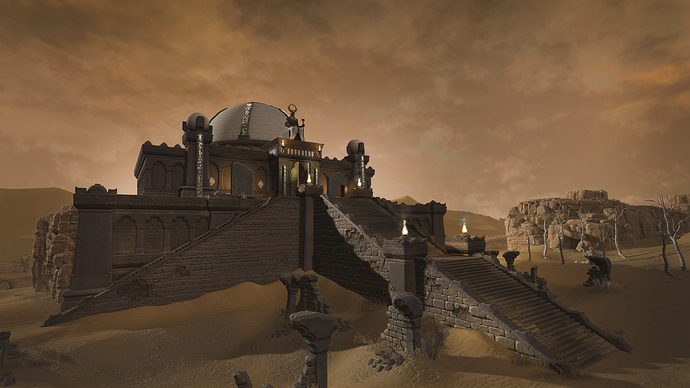 Once you’re transported to the playfield, you’ll have a chance to explore and get a lay of the land before the scenario begins. Once you and your team are ready, fight to the top of the steps of the Ivory Dome and interact with the red war banner at the top. Once you interact with the war banner, the Onslaught begins and does not end until you choose to leave or until your entire party is slain.

Each progressive wave of Onslaught is intended to be more and more difficult for you and your group to overcome. Every several waves, the composition of Thurga Khotan’s armies changes to represent his various followers: Shemites, Stygians, Zugites, and Kushites. 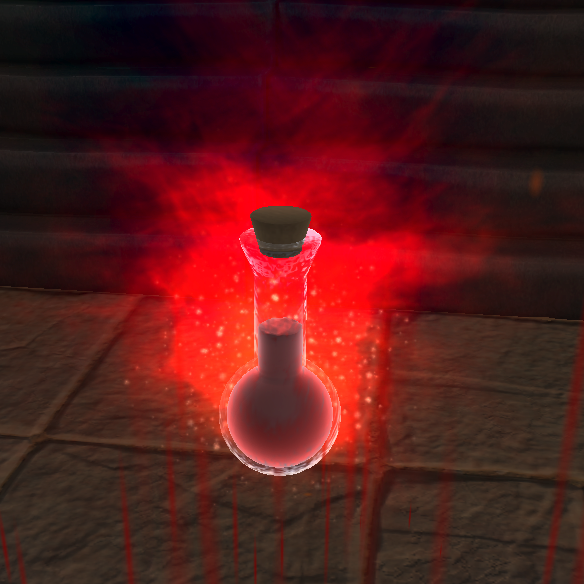 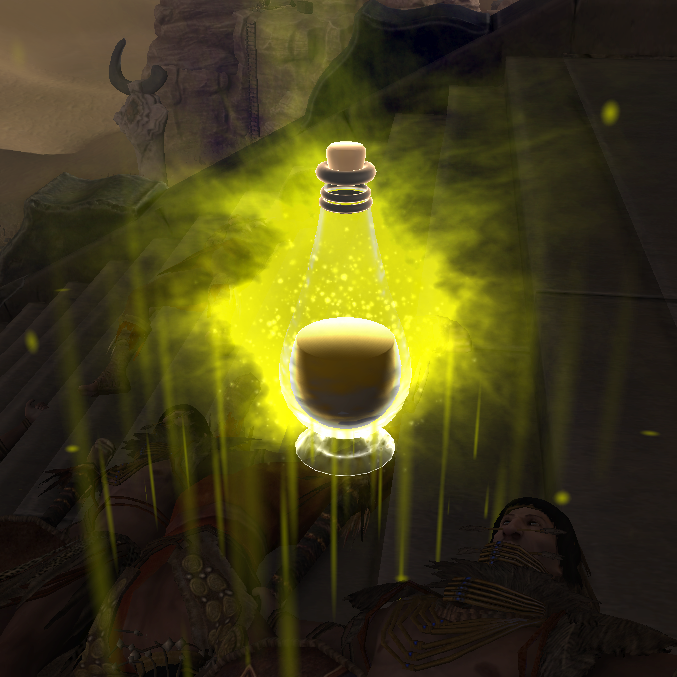 Enemies in Onslaught occasionally drop glowing potions where they die. These special powerup potions grant powerful temporary buffs to those who simply moving across the powerup in the field. Powerup Potions come in four varieties:

In addition to endless hordes of enemies, you will encounter special events and challenges in and around the Ivory Dome:

A new, key feature exclusive to Kuthchemes Onslaught is the Bloodshed Meter. As you score fatalities and chain kills, the ensuing bloodshed fills this meter - once completely full, a Champion boss is summoned. The Champion summoned depends on the type of army you’re currently facing off against. The type of army changes based on the number of waves completed during Onslaught.

Defeating a Champion spawns a boss chest with handsome rewards that scale based on the difficulty (e.g. current wave) of your run. 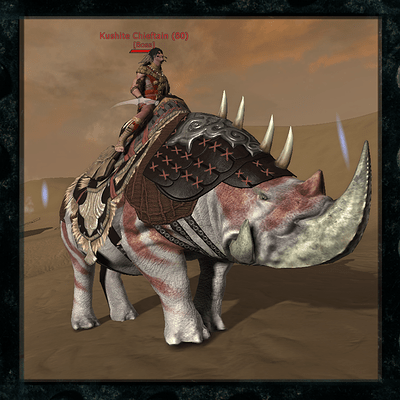 Boss chests contain Mythical Relics (The higher the difficulty, the more tokens you get) and chances at Kuthcheman Gems (higher difficulties equal greater chances at gems and at higher quality levels), and vanity armor:

Hordes of minions, mini-bosses, and champions aren’t the only obstacles you’ll need to overcome during Onslaught. As you continue your survival, you’ll encounter special foes designed to keep you on your toes. Each special enemy has unique properties and acts as a force-multiplier for the hordes, so groups will need to quickly react to their appearance and dispatch members better suited to facing a single strong threat over a horde of weaker threats. For example, special enemies spawn with a “Chosen of Khotan” effect which heals the unit over 20 seconds. Rogues will want to purge this effect using Tainted Weapons.

Special Enemies are marked on the minimap with a Skull: 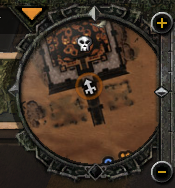 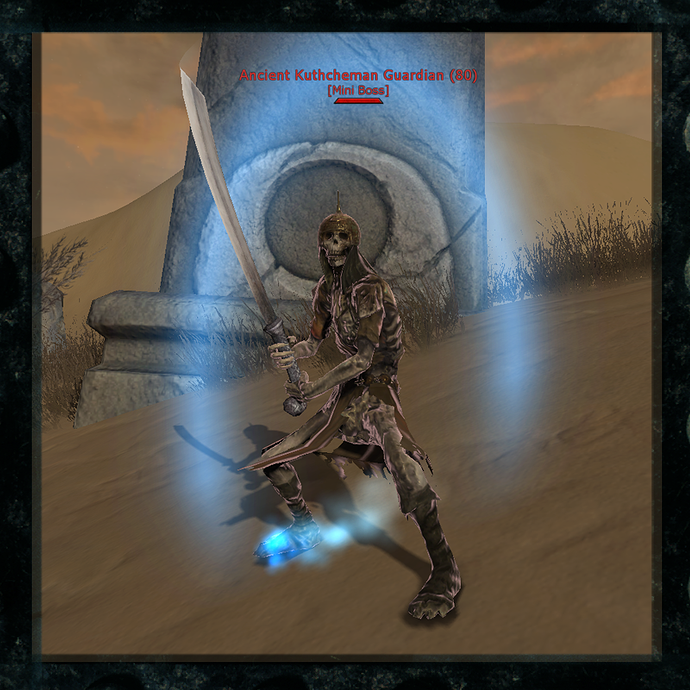 Bulwarks of Thugra Khotan’s armies, Ancient Kuthcheman Guardians are slow, lumbering monstrosities with high innate spell resistance and are immune to all crowd-control effects. Once their health reaches 50% or less, their spell resistance falls and their movement speed increases. 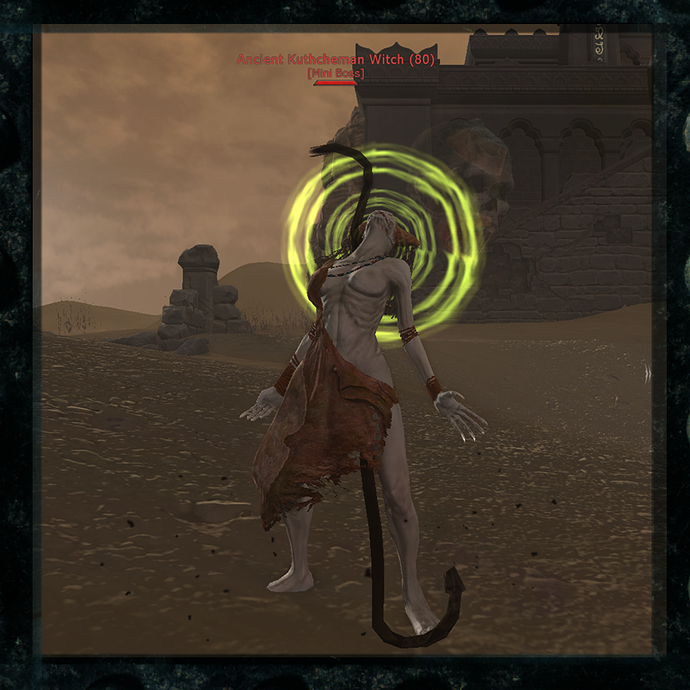 Cruel and uncompromising spellcasters, Ancient Kuthcheman Witches command unholy powers that grant them sight beyond sight and an arsenal of debilitating curses with crippling effects in an area around their targets. Beware their spells:

Ancient Kuthcheman Witches may curse targets from extremely long ranges and without line of sight. 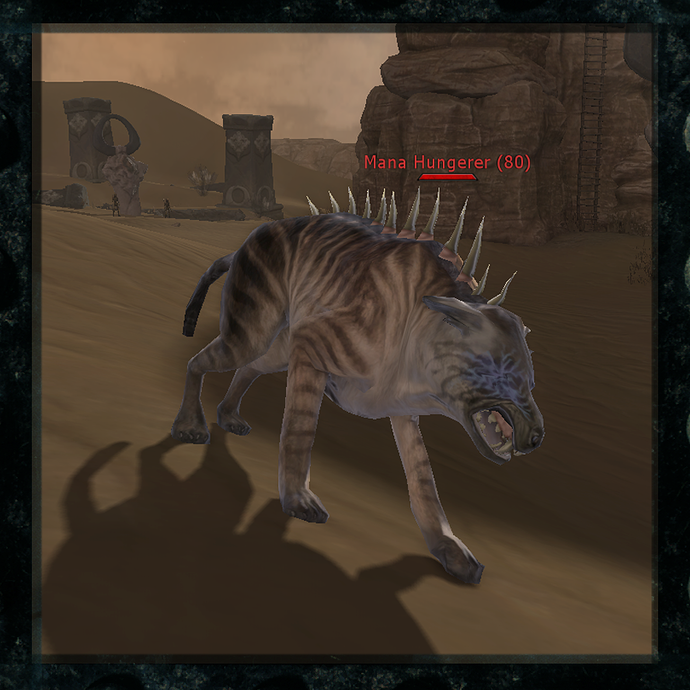 An utter abomination driven by a primal, insatiable hunger for magick and sorcery, these beasts ignore standard threat rules and hunt the presence of Mage and Priest classes without prejudice. Mana Hungerers possess heightened health, evade chance, and spell resistance, and speed. Once a Mana Hungerer has locked on to its target, it will not deviate from its path unless it detects a more powerful source of sorcery, such as that from Spellweaving. 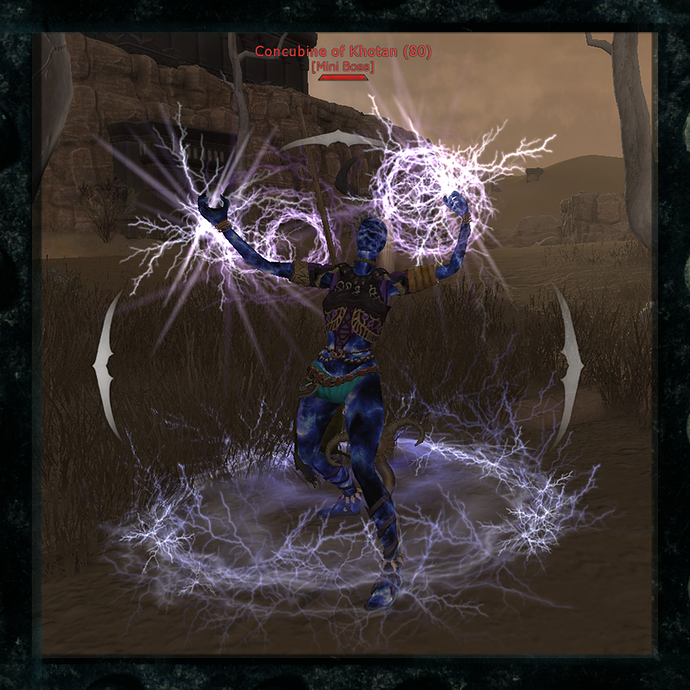 These sorceresses are gifted with the power of storm magic, allowing them to conjure devastating lightning bolts and thunderclouds where they see fit. Once on the battlefield, Concubines of Khotan take up a position and begin their long-range assault: 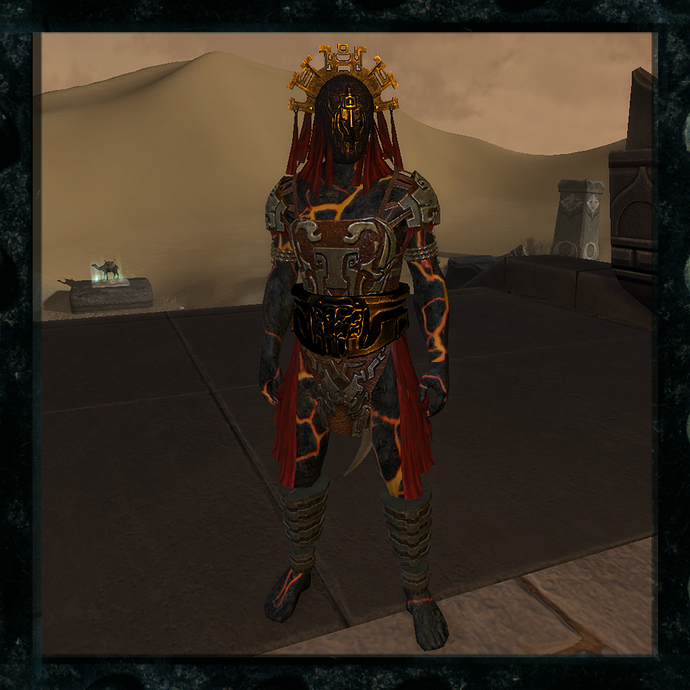 Thurga-Khotan’s own chosen guard, Heralds of Khotan act as force-multipliers for assaults upon the Ivory Dome. Clad in full plate armor and commanding waves of soldiers, Heralds embolden and empower nearby enemies with the Call of Khotan, an AoE buff that increases the damage, defenses, and size of all those affected. Heralds of Khotan may also cast various single-target buffs on their minions, such as: 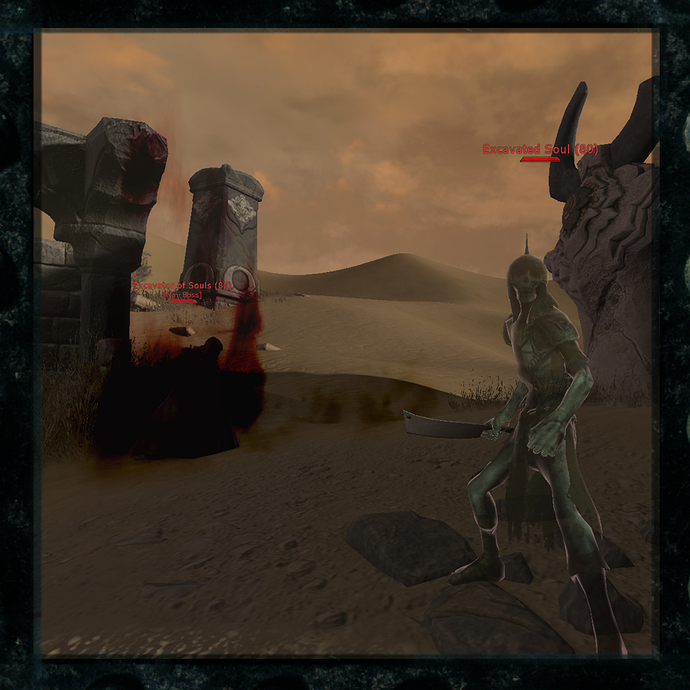 Vile Necromancers of Thurga-Khotan’s armies, these Excavators of Souls take positions around the Ivory Dome and begin weaving their dark magic. If they complete their spells, a wretched abomination of bone and rage emerges from the ground and begin their attack. The number of creatures summoned by Excavators increases as you complete more waves.

What kinds of rewards can you expect from playing through Onslaught? Let’s take a look at the really important stuff: THE LOOT.

As you battle your way through each wave of enemies, you’ll discover and collect Mythical Relics. These new tokens are exclusive to Onslaught and may be spent from a new vendor found in Old Tarantia.

Rewards from this vendor include:

Here’s a few examples of the kinds of weapons you’ll find:

As you can see, each weapon is incredibly powerful in its own right, although not intended as upgrades in PvP. Each Onslaught weapon features sockets for Onslaught and Kuthcheman gems.

All the new Onslaught weapons also feature new artwork inspired by the Starmetal weapon line from Conan Exiles! Following the success of the Armor of the Silent Legion vanity set repurposed from Conan Exiles, we’re excited to bring more high-fidelity assets from Conan Exiles into the world of Age of Conan. 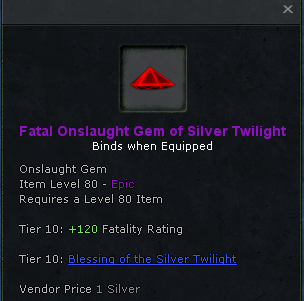 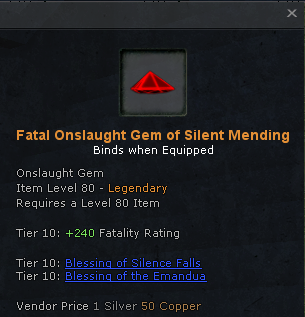 Kuthcheman gems are, again, found exclusively as loot drops from Onslaught mode itself. These gems come in multiple varieties and offer more straightforward bonuses to character stats, such as Intelligence, Hit Rating, and Constitution. 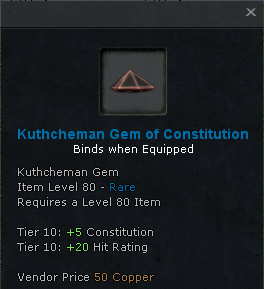 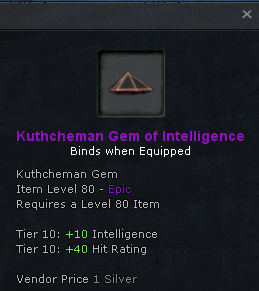 You’ll notice that in all the above examples, both Onslaught and Kuthcheman gems are Bind-on-Equip and thus tradable (until slotted, of course). We look forward to seeing the impact these new gems have on the market

Thanks for reading! We’ve been hard at work on this new feature and we’re looking forward to watching you face the endless hordes of Thurga-Khotan. How far will you make it? See you in game!