Hello everybody, since today my game crash with an error message " memory can’t be written " 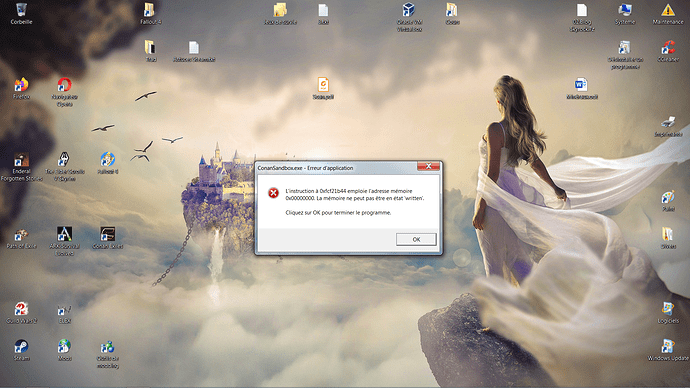 I tested without any mod, and it’s always the same, 3 days ago I could play perfectly without worries with this game, but now as soon as I want to play solo: crash

If someone has an idea. ( thanks )

I gave some suggestions here.

I have no power failure, just error messages with Conan Exiles, but not with the other games

To explain myself, and sorry if my English is bad, I’m French, not Turkish

my game does not cause me ctd all the time, but only when i try to play solo, at a specific time.

If I launch Conan Exiles, and I go to the mods or settings menus, everything is fine, I can quit the game normally, there will be no error message, and no ctd ( crash to desktop )

[[ However ]] if I launch Conan Exiles, and go directly to the “Single player / Coop” menu, a message will appear:
“Do you want to play coop / or solo?”

And it is after, if I quit the game without playing : error message and sometimes crashes at the next launch of game ( permanently )

and I removed all my mods, it’s identical.

The problem appeared after the last update.

The update, which adds a message, or it is written: do you want to play coop / or solo?