Murderholes and Archers on the Walls

So I seem to remember that most of the wall types have an issue with archers being able to fire over them. Which is a common defense in fortifications.

I’ve been watching Three Kingdoms. There was an ambush on Zhou Yu by Cao Ren, about midway through the series. And that made me think of a possible solution.

If possible, create a section of wall with three “murder hole” windows in it. It should be the length of three ordinary wall pieces. You interact with this and place an Archer thrall into the slot, as if it were a crafting station.

This creates the archer to patrol these openings. When an enemy is within range/sight of that particular section of wall, the archer inside goes into his firing animation at the windows, but doesn’t fire any arrows. It only looks as if he is, for the benefit of those watching on the inside.

On the outside, the arrows are launched from the section of wall itself, as if it were a siege weapon, almost. It’s something of an illusion.

You station the thrall, and it looks like he’s doing the firing, but the firing mechanic is coming from the wall itself, and only when the conditions are met.

That being 1) an archer thrall must be placed in the GUI, 2) an enemy or creature must be within the sight lines of the wall itself.

It might be too difficult to work out the coding, or too big a draw on resources, I’m not entirely sure on those counts. However it could be a rather elegant solution, and a somewhat better way to create your defenses.

You could also make it a one-to-one ratio, where it’s a single wall panel in size, with one archer per panel. But that could lead to some lag in having too many of them placed. The 3x1 method above was meant to offset this by forcing you to have a much larger building, or sacrifice the number of archer points you had overall.

A 2x1 sized wall piece could work as well. One archer could cover both openings. The wall would fire an arrow at the same rate as a single NPC archer.

Love this idea another way to limit them would be to make them like shrines and not allow them to be placed within a certain distance of another piece of the same type.

Also how about patrol routes that would be like a waypoint system with torches or something that you could assign fighters to so they can patrol your base and not just stand like statues and would allow for some creative raiding to get in unseen by shifting guards.

That could be interesting. Or a small stone that could look like a natural feature of the terrain. Create a line of them and link them together.

Like the first stone you place, then use an activation item to target it, then target the fighter placed next to it, to assign him the patrol route. Then go and target the next stone in line, and the one after that.

When you target the first stone again, it completes the route.

It should be the length of three ordinary wall pieces.

You interact with this and place an Archer thrall into the slot, as if it were a crafting station.

This creates the archer to patrol these openings. When an enemy is within range/sight of that particular section of wall, the archer inside goes into his firing animation at the windows, but doesn’t fire any arrows. It only looks as if he is, for the benefit of those watching on the inside.

On the outside, the arrows are launched from the section of wall itself, as if it were a siege weapon, almost. It’s something of an illusion.

This is exactly the area of the mind that developers need to develop further. Not every time a feature needs to be provided as realistically as they could be. As long as the feature is based on realism (not reality), the illusion is all we need.

Or was it the other way around (reality, not realism)? You get the point though, right?

interesting idea.
Part of the issue is AI. The game just has horrible AI. The firing over the half walls thing seems to be a Archer Thrall issue (seriously watch a recent Firespark video fighter and Bearer Thralls have no real issues (and may do more damage))

Murder Hole is a different thing and is a internal defence not an external. I think you are think of Arrow Loops. Slits in the wall they shoot out. A murder hole would be a opening in a ceiling that you can shoot down into but cant be climbed up usually in between two gates. In this game that would be putting crenellations (sp) around a single space opening with oil cauldrons around it (if they were in anyway useful)

Yeah, I think of murderholes as the hole in a ceiling to pour boiling liquid and the like down. Didn’t think of another term for the arrow slits.

But if they made a wall like this, why not a ceiling tile?

Imagine placing a door into your hideaway. On the inside above it you place a murder-hole ceiling tile. With GUI and such that lets you fill it with acid or something.

Couple that with a murder-hole floor tile. When someone steps on the tile, it triggers the ceiling above to dump the liquid on their heads and damage them.

You could also create a half-wall with cauldron on it as a 1x1 piece. That could be triggered if anyone climbed along the wall section below, to dump the cauldron of burning liquid on their heads.

well I wouldn’t hold my breath at either. They haven’t added any knew wholely building pieces in over a year (since release) and They can’t get the current AI to work right and oil currently is useless for the most part as a weapon for defence.

You can get a similar concept by using 6 triangular foundations you fence your archer in place as they AI is so bad, on the rear centre triangle. On the front edges you put a wall and on the front straight edge you put a crenellation. … I will go in game and build one really quick… and post an image. The Key is of course don’t use an Archer Thrall as an archer so they can actually shoot things. 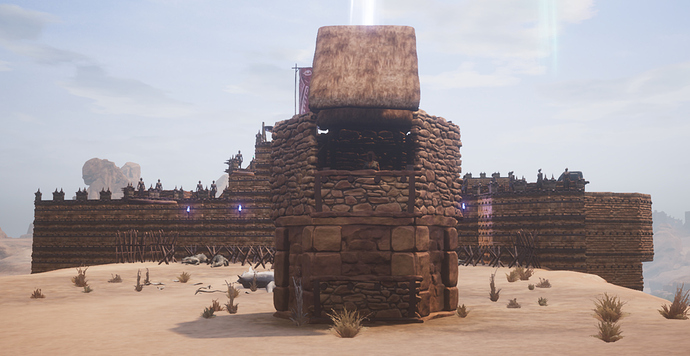 You could do that along a whole wall of triangular foundations but that is as close as you can get and really it is just RP rather than function. The wall behind has 12 archers to fight the purge. With the regular gators most purges in this location are a breeze

Alternately you can use square foundation in front with alternating layers of triangle wall pieces to narrow the angle they both can shoot and people can shoot at them. again though it is just RP.