My Crafting and Storage Area 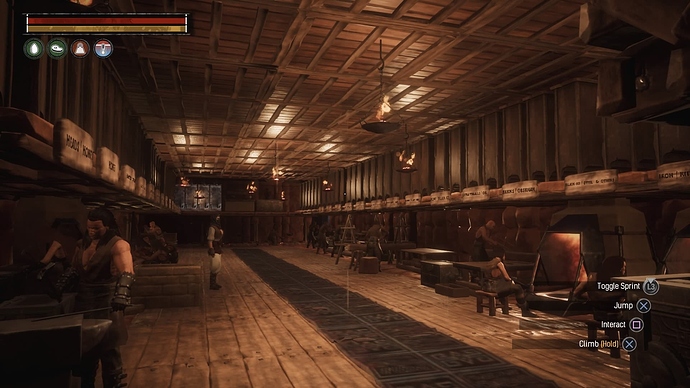 Well done! I don’t think there’s such a thing called “too much” in Conan.

I love it. Where’s the time clock to punch in?

seriously though that looks really good.

You know, you have an excellent point.

Looks very efficient, I can’t imagine how long this would’ve taken or the sheer amount of materials needed (if done without admin panel).

I also stand with a previous statement I made on a different thread, we PS4 users need a way to hide our HUD for screenshots.

It’s built on a public server (3890). One of my favorite things to do in the game is building, so I’m always working on stuff. I needed a good way to organize it. I’m still trying to find the best placing for things, but mostly I’ve just got it memorized or look for the label.

You know, I’ve already “beaten” the game and removed the bracelet after giving my base over to someone on PC. I did it because I got tired of building. I restarted on server and joined a clan that likes to build but not so much killing and farming for mats. I love killing/capturing thralls and I farm a great deal of mats in the process. It would have been nice to have someone like you to play with me, so that we can concentrate on areas that we both enjoy…

I’ve got a circuit that I run, checking my thralls for named spawns, grabbing mats on my way back from each of those locations. I’ve got that “gotta catch em all” mentality going as well. Slowly populating the massive build with named Thralls, dancers, and Berserkers (for defense).

what are these mats you speak of?

My collection was pretty deep, but in the end I had no use for them and decided not to pursue completion. My “rarest” was the T4 priest out of Dereko and the Exile crafters (i.e. Barks at Moon) because hanging out at Jungle/Exile wasn’t very productive for me mainly due to logistic issues. My collection out of NA was complete, and Volcano/Mound were nearly complete. I farmed Seper a lot in previous server so I was saving it for last before I decided to remove the bracelet. I had bout 70 thralls guarding my base, most of them from Volcano or UC equipped Silent Legion armors and Black Ice Broadswords/Serpentine/Dragonbone weapons, and two more large boxes full of fighter/archer thralls waiting to be deployed. I’m not gonna bother listing greater pets since they are easier to obtain… My “left over” star metal that I handed out before I removed the bracelet was 800 bars, pitiful amount compared to what I had before I decided to dress all of my defenders in silent legion, but the recipient was very happy. This collection only took 2 months since starting on server and I was a bit disappointed at how easy the collection was to obtain. I know it may sound like it, but I’m NOT trying to show off. My involvement in the collection was being a sidekick for OP thralls, so it’s not like you need to be very skilled to collect them. All you need is one thrall and move up the ladder. If they were more challenging I think I would’ve tried to complete the collection. That said, and I know most people will disagree, but this game seriously needs to nerf the thralls on the PvE side, or at least up the difficulty of AI controlled NPC’s. The AI in particular needs improvement as they are too predictable.

Not too much, and i love that you took the time to arrange the ceilings in the same direction

I had 140 large crates of mats and items. Got distracted with everyday life and work…logged in to everything being gone. Was a sad day. So now I’ve decided not to get that crazy anymore. Damn decay system.

I think I need to adopt your signs, I am forever doubling back on myself or running through the wrong door, next build, next build lol