Need to have a serious talk about server lag

also some moves r not making sense… why they closed servers when they knew that what they have is crap? why they tried to make population denser since they knew that server performance would drop THAT much?
aint that like fooling us all?
who the heck will buy next products from them?
on what servers dune will run? same crap ones? how they will adress the issues they have with CE in dune ? duping? undermeshing? a shitton of bugs? they r unable to do it in a game they working on 4 years now…

the company’s image is becoming tragic… why they do not realise that?

Well they may not be legally able to disclose anything about the contract. None of us know so all of this is speculation on all of our parts. Does it suck, yes. But there isn’t much we can do about it.

As for the server merges, do you remember the forums prior to them? Post after post after post about how the game was dying due to low population servers for months on end. And in all honestly, there were so many dead servers that some really should have been trimmed. Did they handle it the best way possible? I don’t know. Probably not. I doubt it was any attempt to fool anyone, but an honest attempt to breath more life into the servers they have.

As for the last thing, did you play Age of Conan (AoC) when it launched? I did. Played it for 8 years. Played The Secret World as well (TSW) though admittedly not nearly as much. Then I joined the early access of Conan Exiles. I know others who have done this as well. I know exactly what the company’s image has been for a very very very long time (trust me, it isn’t becoming anything

never played any other game of fc , and despite the fact that i really like the people i know (from posts , vids etc) the possibilities to buy another game r almost 0.

they will need to change a lot of things to make me a spender.
the most important is the ban policy , but there r many aspects that i find really annoying and keep my wallet closed. like the returning bugs of almost everything, that we 4 years in live game and still things r not implemented (like mummy of the ring) while they had time to unleash a full map dlc!!! or the duping , the undermeshing etc…

if they can handle the way their game engine works , its time to hire some more experienced ones so the ones that r occupied 4 years now (and still not learnt the engine!!!) should learn from…

That would require G-Portal to consent to that. I’ll tell you right now, that’s not going to happen.

G-portal is a problem and they know it. But they are happy to push that blame over to Funcom. Of course Funcom has responsibility for entering into the agreement in the first place, something I doubt they will repeat. But Funcom isn’t the root cause. Unless you want to still blame them for a decision made 5 years ago for not having hindsight.

Any modder will tell you that G-Portal is full of sh-t. They frequently throw modders under the bus when players and server owners using their platform have issues getting updates. They claim the mod is broken and its why they can’t update. When its their own update system that is borked.

Its only when its a popular mod with a ton of users and a ton of complaints that they actually go in and fix the issue. But they don’t ever claim responsibility. If its an obscure mod, such as a server’s individual mod, or a new modder under the radar, they won’t bother. It’ll stay borked and unable to update until a bigger mod updates.

FC is in a pretty crappy situation here. They can say nothing (even if the truth) that will damage their business agreement with G-Portal. If G-Portal’s customer service is any indication, they will sue FC the moment any inkling of truth comes out in an official statement that they can construe to be damaging to them.

They cannot switch to another provider. They can’t even just turn the servers off. And any effort made to the game to try and make it better on those servers is effort taken away from the main game. Thankfully any optimizations made to servers help non G-Portal as well. It just sucks because of how bad those servers are, any real changes are hardly noticeable on them.

One decision they have made that official server players don’t agree with is illustrated here: 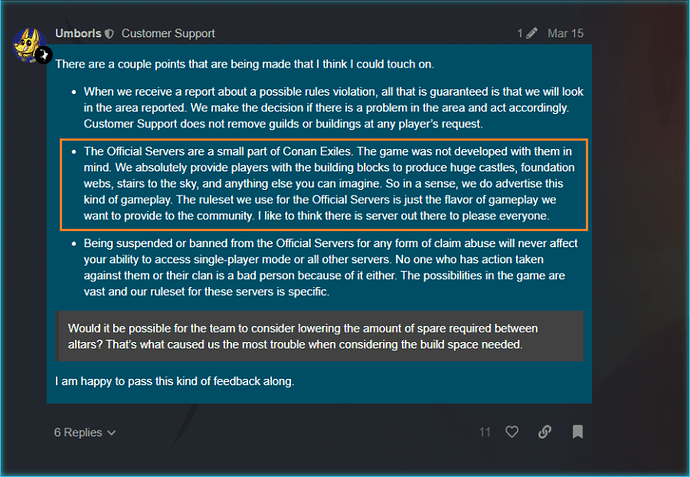 865×599 243 KB
The developers (who do not themselves maintain the official servers, aka the ones who make content for the game) do not have officials in a high priority. I don’t know exactly why this is, probably if I were to hazard a guess that we wouldn’t have the Jungle, the North, Siptah, and all the dungeons added after the Dregs. As well as DLCs and other new equipment and building pieces.

Basically no updates past Phase one of Early Access in 2017. And I’m sure all six people who are so die hard about this issue would love to see the game reverted and f-ck all those who purchased stuff since then and actually enjoy the game. But they are such a minority as to not be considered (they don’t even play the game anyway, they just refresh structures they put up years ago, wasting space like ass-holes).

Even the sane minded official players who do like the new content and simply want a place to play it without issue are a small minority unfortunately. So I don’t see this issue getting better. They will optimize our servers, like they do in every patch. But that is mitigated by every bit of content that is added for G-portal servers.

That means more restrictions, stricter enforcement of building rules, and probably more server mergers in the future. I still don’t understand how you all put up with that. The moment I had issues with a G-Portal server I had the owner jump ship in under 2 days. You all stuck with it for 5 years with it getting worse every month of those 60+ months. Never better.

For what? To sit there with your proud head held high saying “My play sucks, but at least its the way the game is meant to be played!” You all cannot even play the game at all for several hours a day depending on server, and even FC doesn’t consider them the way the game is supposed to be played. They’re one of the last considerations when content is even added, if they are considered at all.

Eventually it’ll come to a breaking point. Officials are on borrowed time. Eventually we’ll see an update with enough content to just break them. They may even see a wipe when that happens and they exhaust their ability to even start them. Then some of you will get your monthly wiping server set you’ve been waiting for. But then actually see how empty the servers are when the serial refreshers have nothing to refresh, and finally leave.

We have seen improvements too , maybe not as great as on other server providers , but for being on an official for 4 years now , I can assure you that the EL one I play on works better at 30 concurent players now than it did 3 years ago at 20 …

This post speaks truths we cannot do anything about, but at the same time in the things a lot players can do about they simply won’t! I meet frequently new people, players that play the game for years and they are attached to demons of the game and not the essence! Online gaming has a high cause, to socialize, to play with others, to have fun with other people. In this game the plurality of the players care more for digital assets and “demons” than socialize and enjoy the game.
No matter what I will do!
No matter how many times I will try to make them understand that there are no demons, or skills, just experience from repeat.
I will fall to a complete 0, my efforts are useless!!!
They are ready to brag and fight for a rare thrall, crafter, armor piece, or weapon…
Omg.
2 days ago I was trying to explain to a team mate on a server that the rocknose or sandreaper farming in official servers is useless. I told him, fix your golden rocknoses to be able to brag that you have them and put them to a preservation box, not in the pen. He was trying to think of a way to fix 5 pens for producing gold, silver and ichor…
To fix alchemical base

… Omg.
I told him that you will crush the server to have 500 alchemical base in a week???
Really???
Go kill a damn bearer and you’ll gain 750 in minutes.
They play wrong…
They care for bull… t and forget to play the game or never learn it and enjoy it…
Pity.
It’s not only, on Funcom!
It’s not only on G portal!
It’s on us too, but we do nothing more than complain and blame all the others except our self.
I give no hope in this part, people cannot change!
So I enjoy the best I can and continue playing against all odds.

Just taking a moment to note that this one sympathizes with the core concern, but has found the rebuttal exchange highly informative.

It is impossible to play due to the amount of lag, especially in pvp.
A shame and lack of consideration with the players.
After I’ve played another 500 hours, I’m about to give up.
I realized it’s much worse after the last major update.

I realized it’s much worse after the last major update.

Yeah but that was unavoidable since it ran smooth as butter on TestLive all up until launch.

No, wait, it was an ungodly lag fest for weeks.