Yes, this is a great set for women and men, many of my original characters still wear it as their regular kit. The Belt is maybe the best in the game.

However, it should return as a Cloth or Social armor set. The original Mithrelle dropped are Light Armor is inaccessible to Clothies.

The jacket of Alyssa (Thirsty Dog Inn, Tortage).
Not sure if the item (or a variant) is already avalaible in game from quests or drops. I think not, but anyway not as vanity. 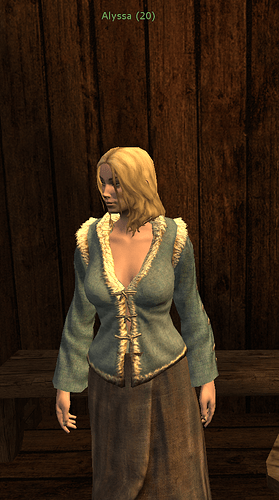 @Mussagana
So, roughly one month has passed and I wanted to ask: what do you think? From the amount of likes I can see that especially the outfits in post 2 and post 4 are wanted. Will it be possible to make these outfits somehow available in game for players (pls no real money paywall ^^)? Or do you think there are not enough votes?

However, it should return as a Cloth or Social armor set. The original Mithrelle dropped are Light Armor is inaccessible to Clothies.

Something to help this kind of situation ‘I can’t wear it because it’s not for my class’ would be to do like DDO does.

This would also give a return for Funcom having to create the Mirror in the form of hard cash by selling it in the store.

I was not aware of these, BUT getting any of those sets from onyx is terribly over complicated. There was no real good reason to take them out of mithrelles loot table in the first place.

I’ll try to get some time to look at some of these this month.

Thank you very much for your response!

Could we get this cloak modeled for female toons. Males can get it from guild citys but it is not available to females. 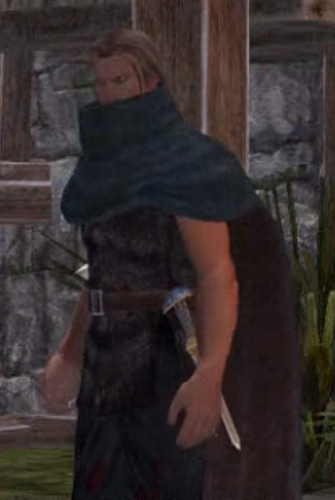 What cloak is that? and what npc sells it?

It’s sold by one of the NPCs in the guild tradepost building on the upper floor. There is a certain renown rank required to get this NPC though.

It was the leatherworker in the guild city trader. Thanks. Cool cloak 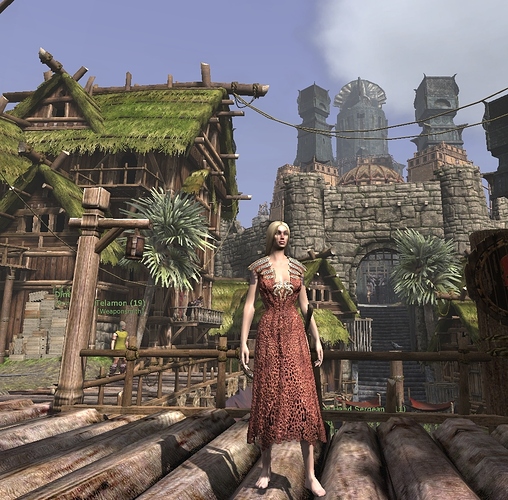 I would rather wish that the Khitai armor sets could be gained as social armor. It’s almost impossible to grind the full sets, especially with new Saga. So please FUNCOM, I really want to complete my Wolf set.

A complete noobish question from me, since Ive not been into transmogs or clothing in any game Ive played, but I realise the popularity;

How streamlined/easy is clothing/transmog in AOC vs for example WOW?
Its also part of achivement points/Can be easily tracked by default game system or the addon All The Things.
I sometimes watch Asmongold/WOW streamer, and his main focus is pets, mounts and transmogs. Its also one of the most/the most popular stream for WOW, but that probably has to do with his hyper personality. That aside, its obvious that clothing IS an extremely popular side to MMOs.

Vanity stuff has nothing to do with achievements but pets and mounts do (there is a tab in the achievement window).
The reason I made this thread is fairly simple: I like being able to customzie my characters in every detail to make them look unique and different from not only other player characters but also my own characters. I also try to go for “themes” when creating a vanity set for my characters, just a few examples: my Barbarian looks very similar to the Diablo 2 Amazon, my DT got the typical “evil knight armor” in all black with lots of black leather and a huge black feathery cloak and my ToS got egyptian Pharaoh-like sets.
The vanity system got introduced in 2011 and it was a pure blessing in my opinion because before we got that, almost everyone ran around in the same armor sets, raids could look like a big clone army.
More vanity items means there are even more cuatomization options, especially with the many armor slots that AoC got. You got 8 slots where you can put alomst any item - there are lots of combinations that create great looks and I just love it when people make their character look interesting and unique.
Also, I got a little bit of an “RP-background” since I was doing lots of RP a few years ago and great vanity sets can help make it all a lot more fun and interesting - imagine you want to make a movie, making your actors look believable is a very important task and you can easily achieve that if you got awesome costumes

Just found doing Destiny quest in Saga of Blood. He’s the guard inside the Strom’s Keep warning Strom about Mithrelle plans before your escape (mage archetype quest “The Awakening III”). I don’t play soldiers so I can’t be sure, but this outfit or part of this outfit seems not in game for toons 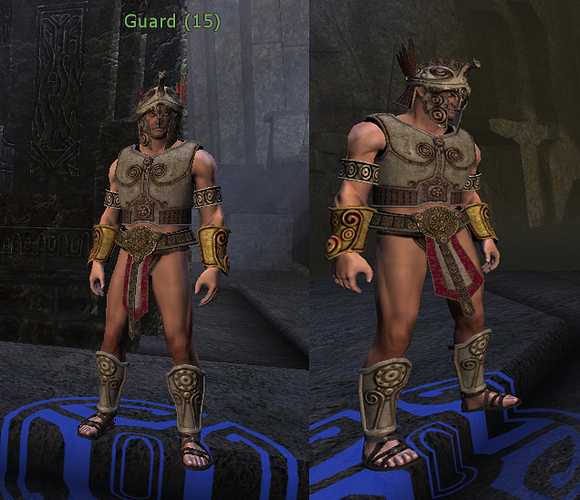 It’s true, these items are not available for players. It seems like this armor is a very old “relic” from beta (and before) times since you can frequently see it there (in videos), also the visual quality makes it look like that.
There are some more NPCs with these items, in the guild city there is one wearing the helmet for example.

The closest item resembling the helmet could be the argossean culture set (for PoM) or the vanity equivalent from the gilding token vendor, however, they got a more “basic” style to them, they don’t have as many details going on and look more simple.