@PEIPER this is what this fix addresses, along with the loss of gear.

@Ignasi So I’ve noticed a few thralls other than the RHTSes who seem to have a similar glitch, but only where their armor is concerned… 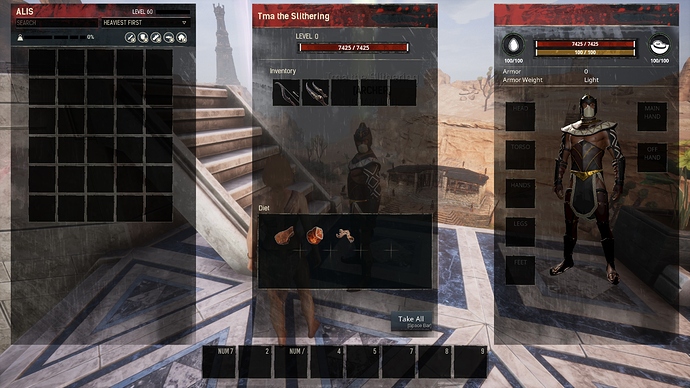 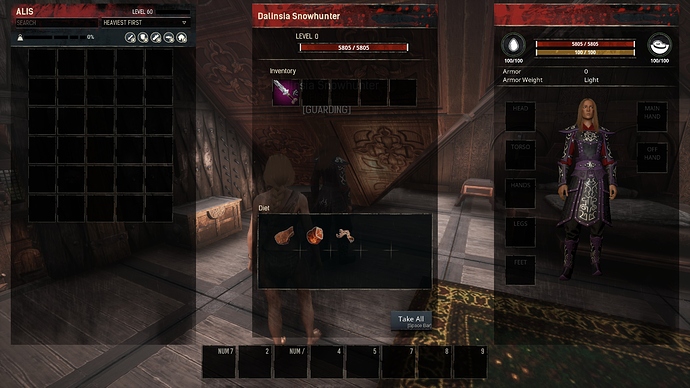 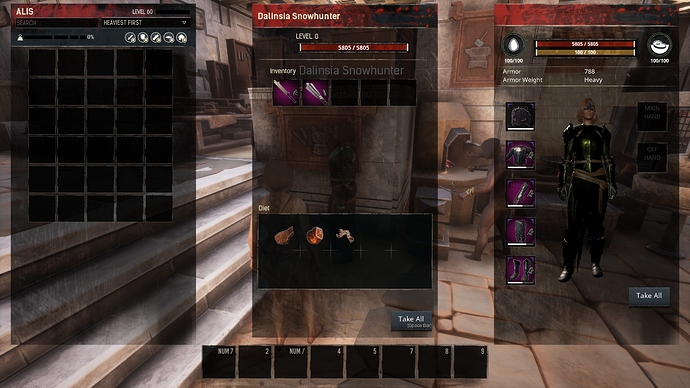 As you can see, this particular Tma the Slithering looks like he’s wearing the set of FE Stygian Raider armor I gave him, but his AC is showing as 0, and nothing is retrieved when I click Take All. This same thing has happened to one of my Dalinsia’s as well. On both of them, you can observe that there isn’t even a Take All button displayed on the armor pane, only for the weapon pane.

The day before the patch, I needed to do a corpse run in a very cold area so I stripped the FE Khitan Heavy armor off one of my Dalinsia’s. After getting my gear back, I put the recovered gear on her (FE Khitan Medium) because I needed the Enc boost from the heavy for a while.

Well yesterday after the patch, I wanted to put her back in the heavy armor and retrieve my medium set so I could help out at a friend’s purge, and discovered her inventory was exactly like Tma’s pictured above — weapon present, but the armor was giving no AC and all the slots were empty even though the preview showed her wearing it.

Thinking I was clever, I thought to place some new armor on her with right-clicks, expecting that would return the old armor to me. Being cautious, I tried just the helmet rather than doing everything at once.

While this did equip the new helmet on Dalinsia, my medium Khitan helmet was NOT returned to either my or her inventories. And when I removed the new helmet I gave her, she was instead left with no helm at all.

As of this morning, the hot-fix has been applied to both the Official I play on and my PC, but neither Tma’s nor Dal’s armor inventories have returned, and they both still show AC 0. The weird thing is, I have several others of these thralls (mostly in either Lemurian Medium or Silent Legion) and their ACs and inventories are just fine — even on ones whose armors were dyed like the two I’ve experienced this issue with.

gratz for the quick fix! nice reflexes guys!!!
Even though i am not affected by this bug, seeing a company acting that fast is refreshing

So I have problems after this patch. My T4 dancer is invisible and I can’t move her anymore. I also have 3 other invisible “performer” thralls that I can’t interact with at all. They did not used to be relic hunters either, so I am not sure what the deal is there. I’ve tried blowing them up and gassing them, but no luck. Not sure this patch did everything intended?

Can’t comment on the 0 armor ones. But the Heavy one (silent legion with mod kits), were they modified before the patch a month ago that buffed heavy armors? If so, then they will retain old stats, and that may not be a “bug”. Anything that has a mod kit added will, normally, not be affected by patched buffs/nerfs to the items.

The Hotfix hasnt seemed to of fixed any performance issues as before the DLC i use to have a nice smooth 60fps, since DLC Derkheto my fps has consistant drops to 2fps, when the Hotfix went out I was happy to think it was fixed.

In my base it was back at 60 soon as I left anywhere from 100 yards of my base the fps tanked again to 2 fps and all the textures vanished. Even back at base the fps dropped to between 2-10.

Please fix this as I really wanted to build a tree house!

We get it, its a bug and it happened to all games i got no problem with that. i’m in a server where everyone wait for a chance to attack now please can you tell me how i’m gonna protect my base when there are is a bug in the game that made all my thrall to 100HP with no gear and with no swords ? it least disable the PVP until the next hotfix released .

Great and thanks for the fast fixes!

One little sidenote though:

We’re also aware of performance issues introduced after the patch and thrall idle noises being repeated too often.

Awesome! Please don’t forget all the sounds in the game that are gone now, like all the “agro” sounds en speach of NPC’s and creatures (like animals). I don’t think you guys removed all those on purpose.

The Silent Legion armor is at least a few months old, but that’s not really the point. It was just an example to show that not all Dalinsias are bugged. #NotAllDalinsias

Oh, i thought they were showing it as a seperate issue. Stand corrected then.

Thank you. This hotfix truly fixed main problem with Relic Hunter Treasure Seekers. All my clan’s Seeker received their armors and weapon available again. But I think that now Seekers are doing less damage than before. I am not sure but it seems so.

Playing on an official server.
Since the Thrall fix patch I now can see my previous Relic Hunters both archers and fighters have their armor back however when I try to interact with them it states “You don’t have permission to interact with this” now they are “guarding” but running around my base randomly blocking doors. Will they attack me when PVP is turned on? If I place a new hunter it works normally.

A classic sign of not being in the same clan as they are. Have there been any changes on that front? Try viewing it in the Clan tab.

So hotfix not for consoles til…?

We were attacked too when all our fighters and most archers were stripped naked by the last update. Lost a greater wheel and a base due to it. Now we have our guards back but the damage remains.
I also magically lost all my gear I was wearing when update hit.

@all You can disable the thrall sounds by reducing the speaker-voice under audio options till this is fixed.

I just only play this game. but I must be wait to next week? can you fix hurry? this game is good. i want to play game. ok? I don’t want wait a long time.

Are you going to fix the stop running animations or you’re just hoping we’ll get used it? I didn’t buy this game to be forced to play how you tell me to, how dare you make changes to MY character?!?!?

Any word on when PS4 will get this fix? As it’s currently the only platform still waiting for it.