Hi there! my friend had the same issues, but it was one of my mods that caused the loop. as soon as i compiled the mod with the new devkit, the loop was gone…

And infitine loading screen still going on for 4 days now (i have no mods). Thanks God i didint bought the bp or crom coins because i cant play on the server i have my character. If theres is no support what would happen if have some problem in a purchase?

conan log shows that final lines and keep with this error channel 65 is not open:

Keep repeating this last messafe till the client is closed

I had no mods, any clue what should it means?

any clue what should it means?

It seems like a connection issue between you and the server, did you try a different server to see if that works? If other servers work fine, then there’s a chance it’s just how your internet is routed to that particular one and probably you’re not gonna be able to fix it easily aside from drastic measures like switching ISPs or the server switching to a different provider.

Same day the patch began, my overpillared structures entered abandoned state and were immediatly demolished by scavengers. Thank you for all that solo hours of improductive gaming. I must leave the game for a long while until I feel in the mood to waste more time to get nothing in exchange.

Official EU servers are almost unplayable from 19:00-23:00 with half population on server! around 250 ping+ if you disconnect or server crash like a PVE#6013, you cant come back. The whole server is lagging ther are lots of bug with sorcery craft stations and where is patch for PC/Steam? Funcom mark every ticket i create as solved with no respond. With an attitude like this i have no reason to buy a battle pass or shop in the bazaar.
For 6 days, the game is almost unplayable on PC official servers and no help

Like other infamous patches for other games which completely destroyed them, Conan Exiles has patch 3.0.

You ruined singleplayer by nerfing thralls. 50% less damage? Less stats? They were already borderline useless. The only thing that saved them was the health which allowed your character to manuever around more easily.

As I pointed out earlier that it would be, the store is super-expensive. $10 for 2 DLC items is plain robbery.

The old DLC plans were very affordable. This is a buy to play game, and you have decided to nickle and dime your customers with the most punitive pricing and systems you could have put in. And you put both an in game store and a battle pass. These are free to play options.

The store on the character menu is in-game spam which ruins the player immersion - you have brought your advertising right next to where a player would access their inventory or invest attribute points. Exactly where you cannot help but click on it to entice sales since it’s always visible. But it has nothing to do with gameplay or your character.

It should not be on that menu.

You lost a customer today but it’s been a great ride. You took no feedback from player concerns regarding your announced plans. Zero. You never fixed the roofing bug so even if I don’t update, I’m stuck with that bug. Patch 3.0, RIP Conan Exiles.

Good luck with this in today’s economic trouble but at least the inflation will alleviate some of these prices. Ridiculous price gouging. The negative reviews are going to start pouring in like candy.

Thank you for the new update. However the Bazaar and Battle pass kind of ruins the way you had the game. I get you make more money and if that’s all you care about then sure keep it. But I purchased Crom coins and spent them on stuff in the Bazaar. Only for me to not be able to use the items after logging out and closing the game! Even tried logging in as admin on our server and it just says I don’t have access to the items I already purchased. Now I’m out my money and yes I posted a bug report. But that doesn’t help the fact I purchased something I can’t use. You’ve opened yourself up for this kinda crap to happen. Go back to just including items in dlc’s for purchase. No issues that way.

Yeah, I purchased crom coins and can’t even use the items I bought. The old dlc way was better. The Bazaar and Battle pass have ruined what was a good game. Just a lot of negatives now! This is not just our opinion but many peoples opinions. Sad they just wanted more money and this was there way of accomplishing that. By ruining a decent game!

anyone know when character transfer will be opened up again?

I’ve been browsing the forum and noticed complaints about the “Battlepass not working” or “bought items from the Black Lotus Bazaar wont show in the crafting menu after relog” etc.

Customers are seeing this message a lot: 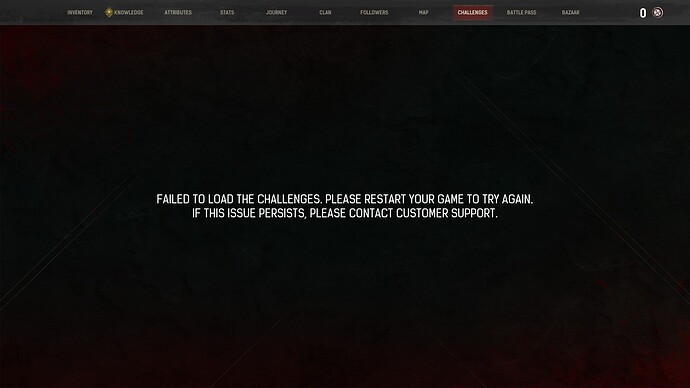 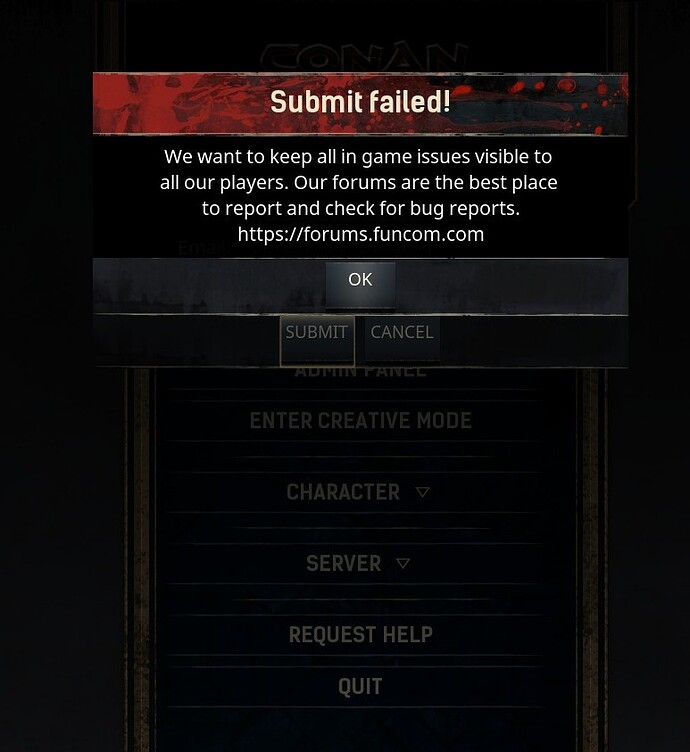 I think there has to be an option added to reach customer support directly over the launcher or ingame regarding problems with purchases from Bazaar or Battle Pass!

Ok I just rememberes Zendesk.
https://funcom.zendesk.com/hc/en-us/requests/new
There you can open a ticket regarding “In-game purchase”
I hope people who do not have access to their purchased items can get help there or at least a refund.

So uh, anyone else find combat extremely… off?
As a fistweapon medium armor character I find my stamina runs out immidiatly and have to constantly take breaks during fights to recharge stamina (good lord I got thralls along else I’d be deader often then I already am due to the HP loss after 3.0 (and the stunlocking enemies))
I think I curse more about out of stamina here then I did in 7daystodie Alpha 17

With fistweapons one cannot parry or use shields so dodging is the only way to avoid incoming damage, but a dodge takes up waaaaaay to much stamina to be an good option in combat.

Events?
Where the f*** can we enable/disable them? Upate patch notes says via server settings.
NO option to turn it on/off in the ENTIRE settings menu.
Can you please FOR ONCE be specific?
That is ridiculous that such new and important (I guess) feature is this very well hidden…

And while we’re talking about being more specific. How about being more specific in some of the challenge tasks? Kill a mammoth with poison apparently doesn’t mean just any poison. After orbs galore the mammoth died but did I get completion? Did i heck. So now to try with my poisonous blade … or maybe my entire carry capacity in reaper poison.
If the conditions are specific then your task descriptions also have to be specific.

That server settings!
I thought it was an in-game setting… Many thanks!

It looks like after update pets missing food, that could boost chances for grit attribute when we are rising them. Food that previously boost survivability chances now have no effect on them

That challenge is a bit finicky. The finishing hit has to be dealt by any weapon poison. Just stack it with poison and wait…

[pc 3.0.2] Please use this thread to discuss PC Patch 3.0.2: The Age of Sorcery. Patchnotes: PC Update 3.0 (2022.09.01): The Age of Sorcery - #6 by Ignasi Please stick to the topic and platform of this thread. Otherwise we may have to take moderation actions to keep the conversation focused on the topic. Thank you!