It is said in the conan lore and univers that the Picts are one of the largest populations until there island was destroyed.

But half of that population also lived on the main land coast with all the other races and had spread out all over the world map.

It even says that conan’s people the cimmerians would always be at war with them for the picts were there mortal enemies.

With that said how come on conan exiles why are there no pictish npc camps?

With the pictish population being so huge and vast and having clans in every lands you would think that on the exile lands and on the Isle of Siptah there would be quite a large amount of npc camps.

Or were the Dogs of the desert in conan exiles ment to be the picts and those npcs racial origins were never changed to to say picts and they were left to be a mix of all the races?

The black hand pirates were not as vast in the conan lore and yet they are everywhere on the exile lands and Siptah.

Siptah makes sense that they would be there but on the exile lands you would think a lot of those npc camps would be picts and not black hand pirates.

With that said how come on conan exiles why are there no pictish npc camps?

This is because the Exiled Lands are roughly somewhere in the circle here: 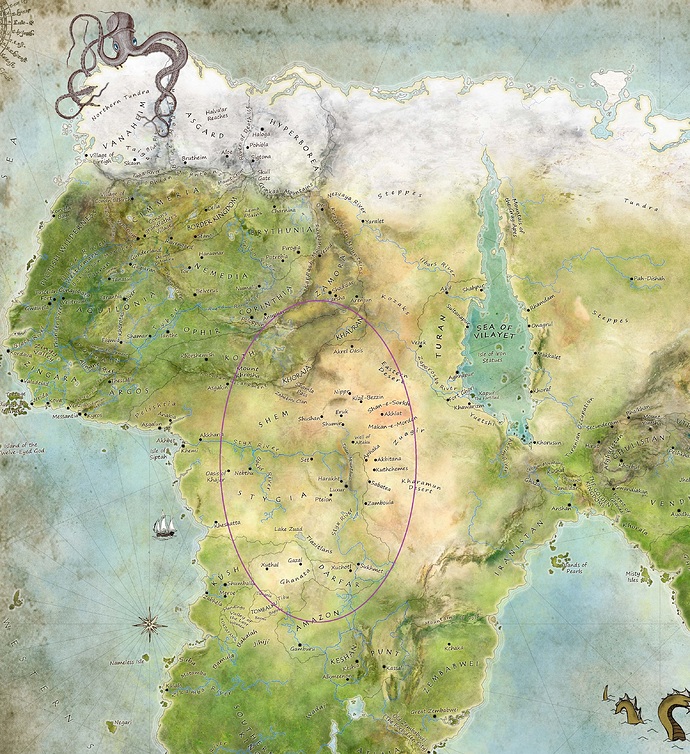 3061×3349 4.13 MB
In Age of Conan, that game takes place starting in Tortage, a city in the Barachan Isles. Since it is quite a bit closer and due to the tolerance of Zingara towards picts, they are very much present in its White Sands section.

Potentially having to get across the 10,000BC sub-Saharan desert is not something the picts are going to be able to do easily. Though this doesn’t mean they couldn’t be brought there like many Nordheimers and Cimmerians have been.

To be honest, I don’t know why the Jhebbal Sag followers in the grove and potentially the Dogs of the Desert aren’t picts.