If you want to know, as a response to the anxiety generated to losing effort on a game I am currently playing. I trust everyone has different reasons to check their buildings.
I still have many things to do in both Siptah and EL, and I chose to play on one map or the other. And in the one I do not play for a couple of days, I will enter just to keep my buildings from decaying until I continue that particular game.

Yep, from a PVE standpoint it doesn’t matter at all. And I see it as well, people who just refreshes, not all of them does this because they really don’t have time. They just don’t enjoy the game, but want to keep their stuff. But this is nonsensical for me to be honest. If somebody does not enjoy the game, leave it. Probably harder for some, but this is the right thing to do. For the player and for the others too in my opinion.

@Wonka and @Capt_insano0 probably that’s me and I represent the minority, but I just can not feel bad for loosing my stuff. If I lose, I swear for 5 minutes, and that’s it I forget about it. I’ve lost god-tier legacy thralls, silent legion warriors, gear that I have yet to find, gear I used for years, chests with full of materials/weapons (that was funny, a cimmerian purge rekt my base, and in that battle I forgot to pick up the loot, probably despawned when the purge ended - didn’t want to get overencumbered mid-fight).

No matter how hard I worked for them, those are just datas presented as pixels on a monitor.

Is there any serious way to check how heavily an official server has been visited over a certain period of time - apart from the option to play on it yourself and observe the vitality of an official server based on its own playing time?

I use Battle Metrics like you’ve mentioned above. What more information are you looking for? Like Funcom IDs?

1040 on BM shows that it is dead, is that a mistake? I know the website is sometimes wrong though, I’ve run into that a few times.

So some servers, especially since merges, are not displaying correctly on BM.

If you look at one of the most popular servers for NA PVP it is pretty spot on.
I am not sure how it can be fixed though. 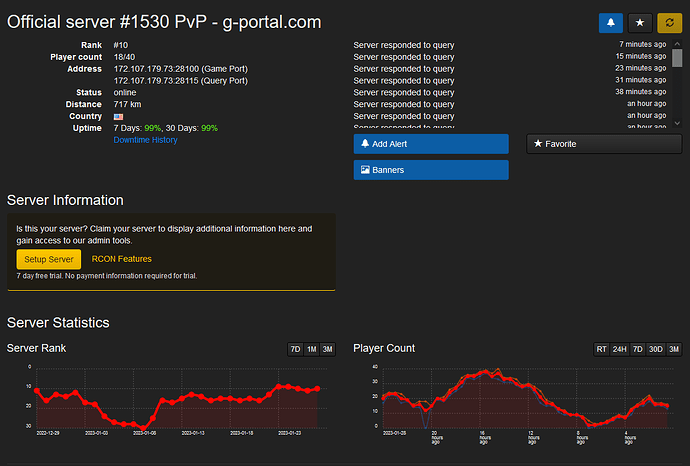 To answer your question from before. Not really. Ever since an update several years ago, even TCAdmin (as well as G-portal’s equivelent) doesn’t really show how many players are on the server its interfaced with. And that’s a function running on the same hardware and network as the server itself.

Server browser (which has its own issues) is the most accurate way outside of logging onto the server itself.

I doubt this will ever be fixed. One of the issues servers like FC provided ones have is they struggle under loads. But one of the best ways for a server to get more popular is to be popular. Numbers breed numbers. Its how Conan servers have always been.

Its why servers in the top 5 of populations have communities of 1500-2500 players.

A 40/40 server that has proven to maintain such a population throughout the week is going to attract players to it. Why not? All other servers would be dead by comparison. But doubling the community population (because of extra building) would bring that server to its knees and then cause it to die off.

You all saw this with 3.0’s launch. Without a sufficient hardware configuration, a server can be killed by its own popularity.

Ambiguity serves as a speed bump to this.

The reasons they have aren’t what I agree with, I’m just saying it happened.

A comment off the actual topic: Lord, it’s hard to believe how many unempathetic users there are who can add to the personal ignore list.

Someone complains about their frustration and instead of showing so much piety and, if necessary, simply doing nothing at all, comments are made that are completely superfluous. If it goes according to that logic:

Why do all the know-it-alls here with their personal server - I have one and using one of these certainly doesn’t overwhelm me - still write anything on the subject when they keep trumpeting that they’re no longer to play on official servers? … But then constantly get involved in this discussion. … My goodness, how shabby.

And now back to topic …