Problem trying to figure out this set

This set here in the link:

It shows 4 different Wolf sets. So, my question is, are the 1st 3 actually existent or just the last one? My main interest is the 2nd from the left set that I plan to use as vanity if it exists. Any info from old Khitai runners?

(remove spaces for link to work)

Someone correct me if I’m wrong, but I think those different versions are in-game. They would be some of the different Blue sets that mostly drop in dungeons / might be on a vendor.

Or course, with those just being concept art, the exact sets may differ a bit.

Though there could be class restrictions on some of them. I’m unsure.

I see a few different sets on here, though this isn’t great for getting a clear picture on how armor looks:

Ok that is reassuring more or less, HOWEVER, which versions are which? Are they just for different classes? That site you linked doesn’t show the appearance it seems.

You get a hint at appearance by looking at the icon on each piece of gear tooltip.

I have no idea which versions are which. Maybe someone else does.

i think the first 3 armors you show are the rank1, rank 2 and rank 3 versions of the wolves full plate set. you can find it as blue items in dungeon and faction vendors for 4 pieces, and the other 4 should come from loot in dungeons.

Ah, so the armors aren’t divided by armor class then but by rank? OK, that looks more hopeful. Just will have to grind all sets then

However just in case, can someone actually check if they are able. I don’t have access to Khitai yet, so I can’t do it myself. Thank you in advance.

For each of the four tiers of armor (three blue tiers and one purple), some parts drop in dungeons, some can be bought with marks of acclaim and some can be bought with relics (simple relics 1/2/3 for the blue-tier items or rare relics for purple items). The details of this elegant system were explained very neatly in a table in the March 2010 game director’s letter, but unfortunately the table was stored as an image on a server that is gone now:

Thank you, couldn’t possibly get a better answer than this. Now I am in a calmer situation. Considering how he armor I’m hunting for is rank 2 armor, and blue, it seems I will have an easy grind after all. Thanks.

In fact there is three differents sets wich are all a mix between blue/violets and buyable/donjon loot only.

I’m not sure this is completely correct. I think there are in fact 4 different sets but aoc>TV armory is just not complete with all the possible blue dungeon gear.
You can clearly see 4 different chests and 4 different helmets and set 4 is not a combination of pieces from set 1-3.
A complete T1 set also does not have the same name. For example the howling moon set has T1 (Shoulders, legs) T2(chest,hands), T3(belt, head) and T4(boots, wrists) items in it. To get a complete T1 set you need to combine pieces with all 4 names.
If it were true that there are only 24 pieces in game and not 32 it would mean that none of those 4 sets shown are complete in game and the 8 epic pieces replace pieces of blue sets.

Only item I could find 4 different versions on on AOC > TV armory was the helmet.

I’m not sure where the Paikang dungeon loot fits in to be honest and if there are full sets of those. They seem to be seperate pieces with different names, stats and money values. Perhaps more sets were planned at some point?

The set you are looking for is the “tier 2” wolf full plate set. It looks like this in-game as of today. I don’t know where all the pieces drop from… I obtained it from a script I didn’t make myself. 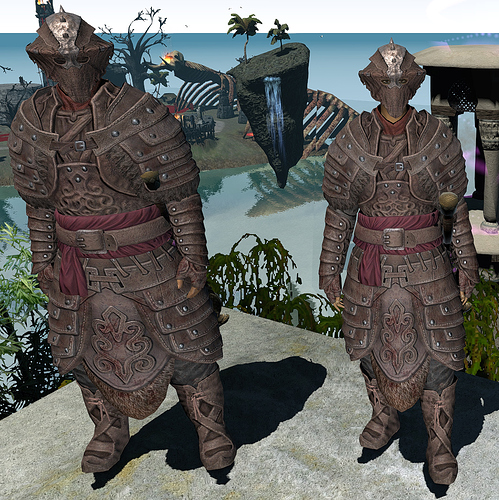 Yeah that’s it. Can you name the actual items tho? It would be very useful.

(Gotta grind all 4 sets then it seems…) 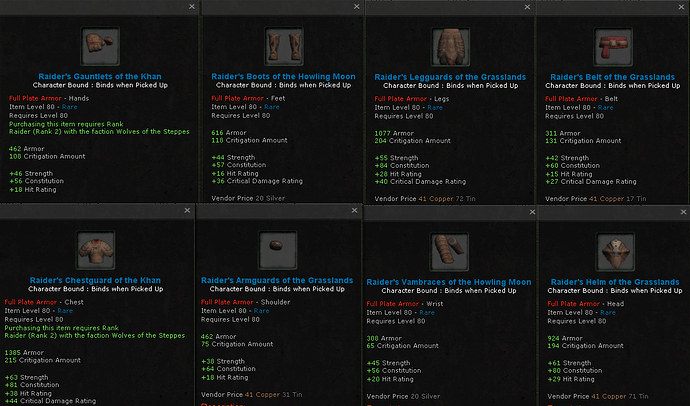 Thank you. A good start for finding the set.

I actually have 1 more question, I have started to buy the gear, HOWEVER, I don’t know what is the name of the rank 1 helmet, can you check with the script what is its name? Or even better, show another list for each set like you did for rank 2 set. Thank you. (i think the r1 helmet might not exist as I tried searching for it)

it should be brigand’s helm of the grasslands, most probably a loot from one of the rank one dungeons : reliquary of flame, vortex of the storm or kang pagoda

yes, i was wrong with the name. but the locations should be fine as r1 helmets only come from those 3 places.

You’re looking for wrong classes then. Tank gear only drops in Vortex as blue gear. Rest pop as epics. There are only 2 blue helmets, however, howling helm is too hard to get to be viable to be an r1 helm.