we have beeen keeping an eye for the purge , and nothing is happening. NOTHING!. we also checked the logs, and there is not even a try.

is there a cooldown for it to start? are there any hidden requirement we dont know about? just trying to understand why its not working.

Is the base the trap is sitting on big enough to attract a purge? You need 92+ building pieces.

Do you have any bases in your clan big enough to attract a purge?

trap is sitting in over 120 pieces,

Are you on a dedicated server or solo/co-op? 'cause I just started a new solo game and I can reproduce what you’re describing.

edit: have you created a clan?

its over official server. yes there is a clan

Maybe jump over to [PC] Updates and Bugs and raise it with the bug template there? Purges on Siptah is kind of a key feature for 2.3

In order to get to the bottom of this, would you be willing to share on which official server this is happening and where your base is located? Please feel free to reach out in private if you prefer.

We in the officer where we play placed a convergence trap far from the base in a structure that we set up out of fear, we did not know how it worked. the puga appeared in the alrrederores of the base and everything worked well.

How big is this structure and what building mats is it made of?

about 200+ pieces (building pieces) mostly t1, but also a few t3 pieces. and a couple benches, and the convergence trap on top. according to me, should be more than enough to call it.

Purge doesn’t work on official pve 6158 either, any time you go to convergence trap it says “purge is currently disabled” and my base is over 500 tiles @Ignasi

Correction, today it seems to be working now. Much fun, thanks for adding this for us. Any reason we can only use unstable to summon purge? Would love to use greaters too

Me too, I have a lot more greaters than unstables because I threw out all the unstables after seeing how long they took to create swirling chaos at a leyshrine. Oops!

Now I have 100’s of lessers too and no use, definitely just need to make conv. trap need 400 chaos

How did you get it to work, we used the purge but said it’s regrouping but never started again

ok , its working but there is some work that needs to be done

there is a T4, called Agra the taskmaster, (supposed to be a taskmaster) but in game is shown as a Tanner. we capture a whole bunch of t4s in the stygian mercenaries. and all were more of less placed in the wheel at the same time. 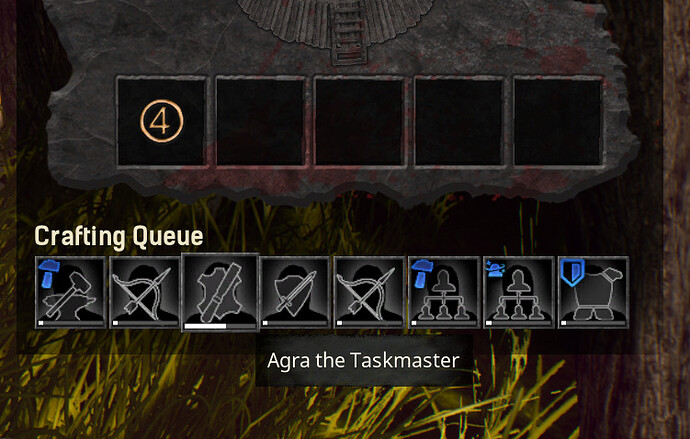 she is over half way . and has been cooking for 1 hr. obviously i think that task master is actually NOT a tanner, but something got borked with it.