The correct way to build a staircase: 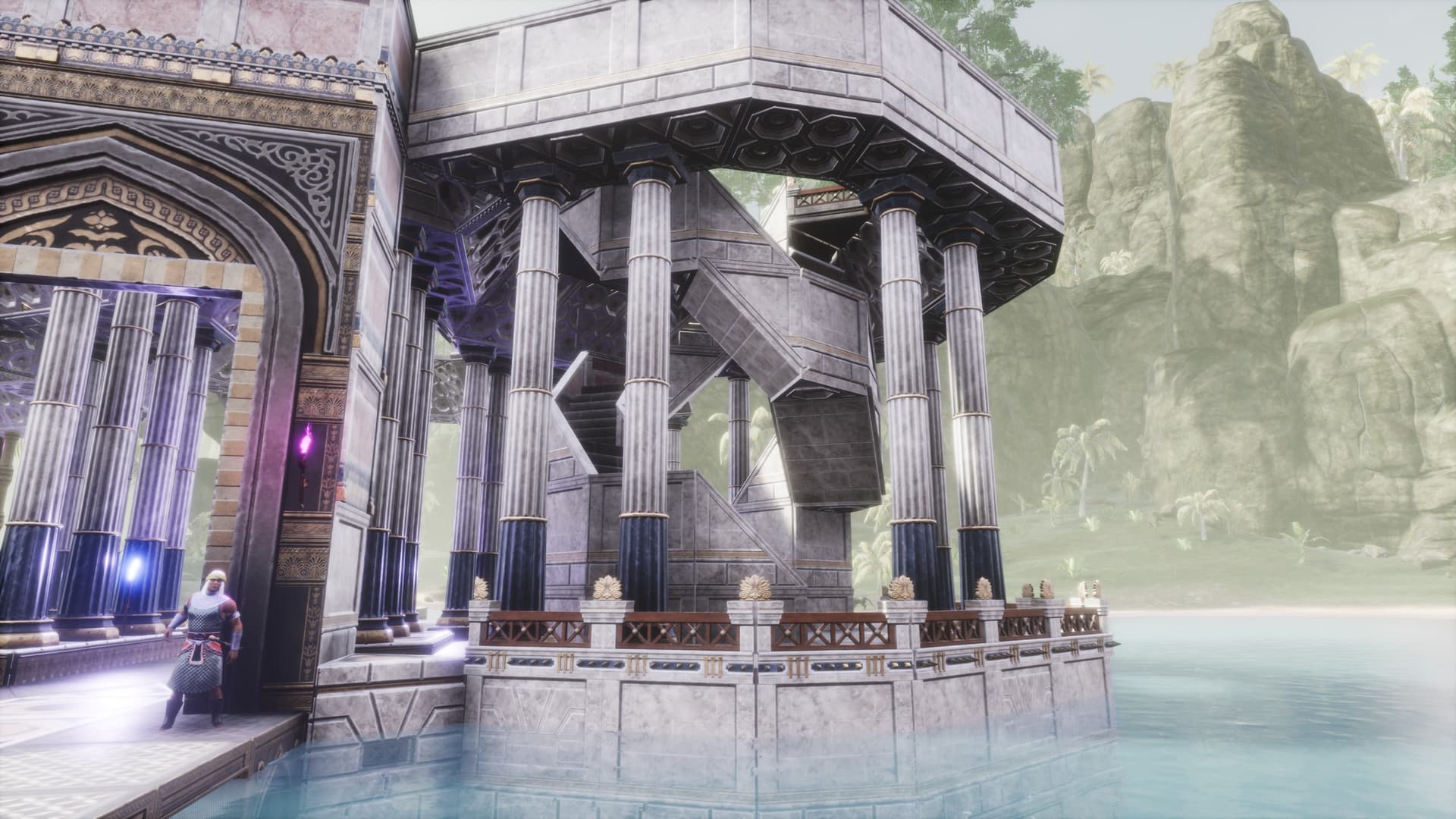 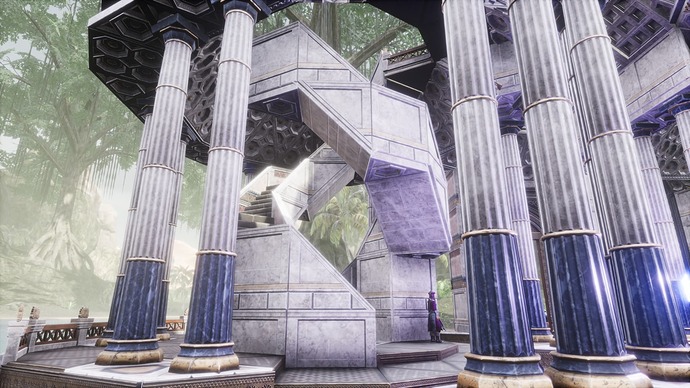 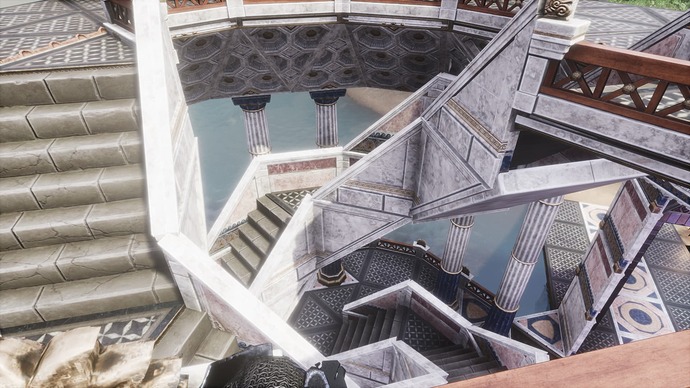 The correct way to build a staircase:

I would say the magical… My jaw is on the floor @Muelee, thanks a million for this too!

Now we have chimney pieces 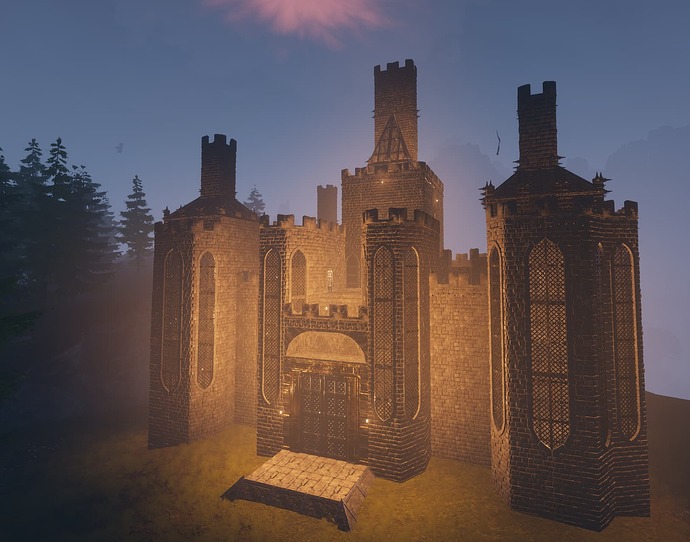 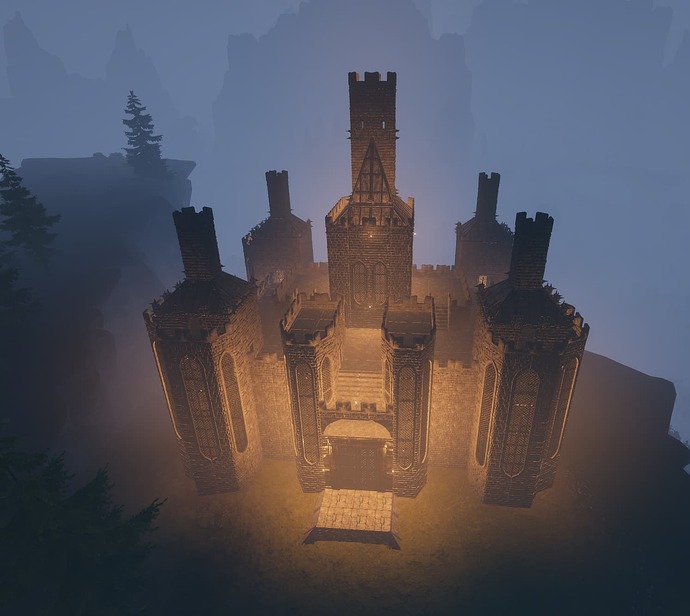 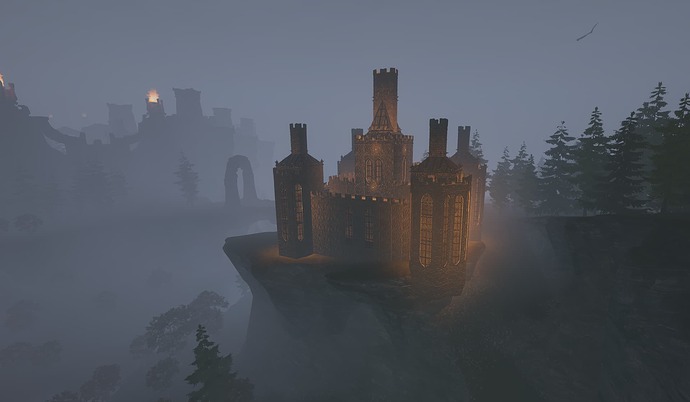 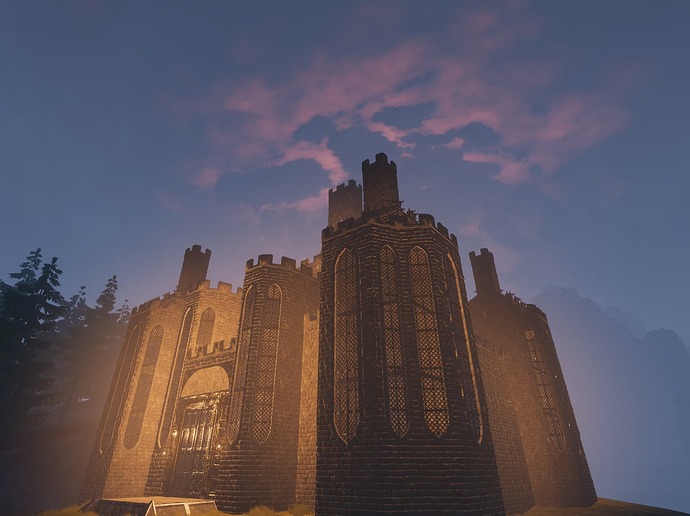 And an interior shot. 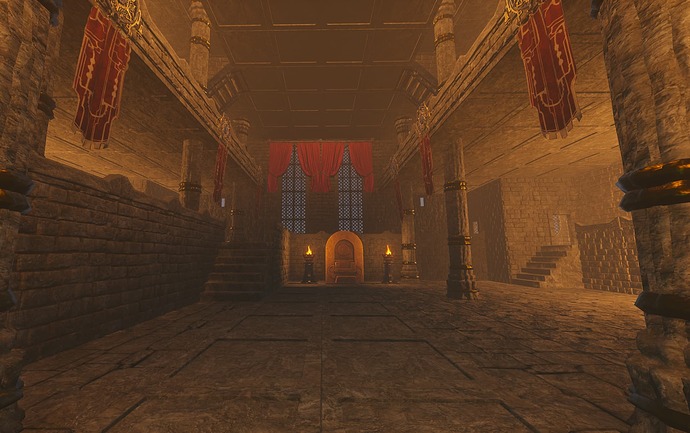 Swung on down to noob river (I really gotta figure out a good name for that tiny little peninsula that juts out near where the ghost is) to remodel that one manor I built. Tried to compress it a bit and make it a bit more organized.

EDIT: dang it, I did it again! 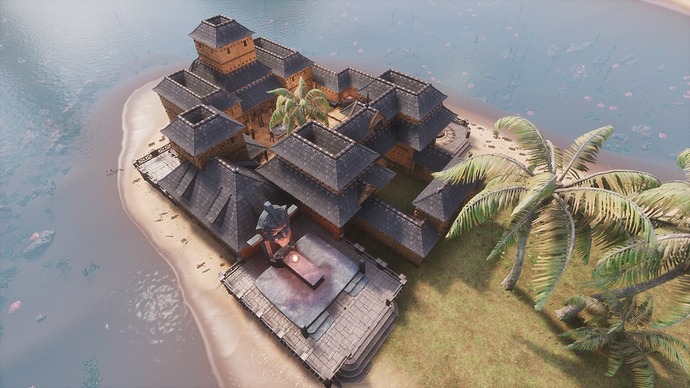 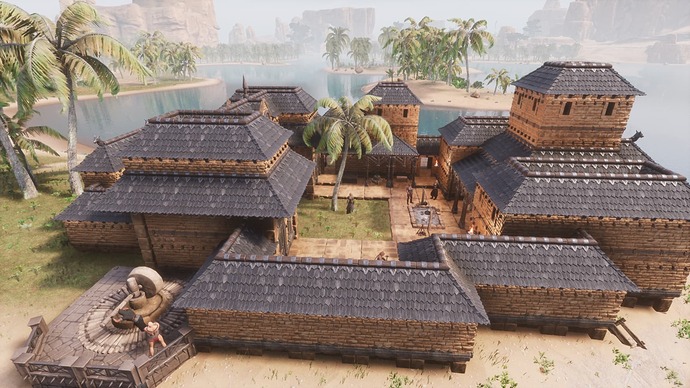 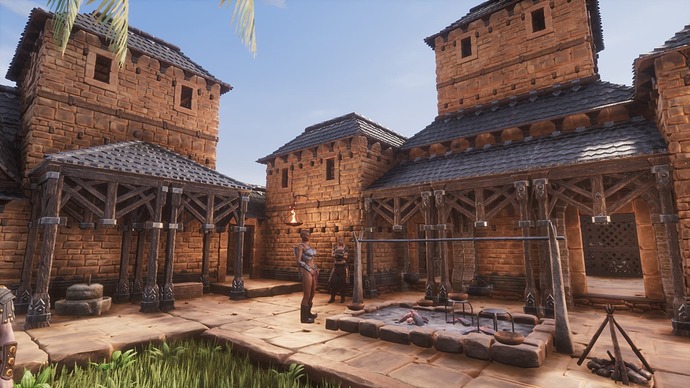 I’m still trying to figure out where i’ll put the summoning circle and transportary stone… speaking of which - I’ve never used it yet: does your active follower(s) go with you through it?
edited edit to the edit - that tree in the central courtyard stays there naturally: setting landclaim radius to .25 is the best.

more edits: it looks really cool from a distance 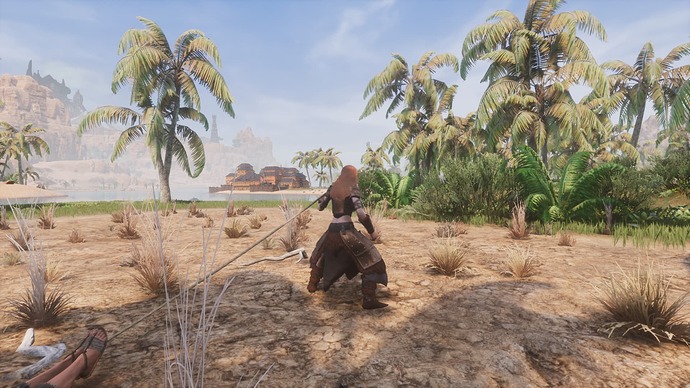 does your active follower(s) go with you through it?

That’s good, I assumed as much but one can never be too certain with how things will go with thralls. Guess I’ll be having screenshots of a new building soon once I figure out a good thrall-breaking camp location. I’ve never managed to upgrade my tome far enough yet to get the stones - even with my crafting cost multiplier set to half some of those requirements are a bit steep for me… 10 dragonhorns?

@drukuku
If you don’t have enough “trust” in dragon fights, go for the hatchlings. Especially the small green fall extremely easy. For each one however you get just one dragon horn! It will take you some time but they are really easy fights. Make sure you’ll epuip a weapon that will help your thrall to kill the dragons. A hammer or a mace cause sunder and it helps a lot.

I’ll keep that in mind. The main issue I have with dragons is really their size making it a pain to fight them. I’ve traditionally used an agility build but now I’ve started using strength and lately I’ve fallen in love with the great axe animations (wish they had effects on the attacks, though).

I’m still scouting out locations for that thrall breaking camp while a Cruiadh is on the wheel so no pictures of that yet. It’s ostensibly going to be a tower attached to an enclosed platform for the wheel - picture a fancy Caravanserai but used for slaving.

EDIT: Upon reflection I realized that this would be just a regular plain old mini-base and that I’m stupid.

Trying to have a modicum of style on a pvp server. 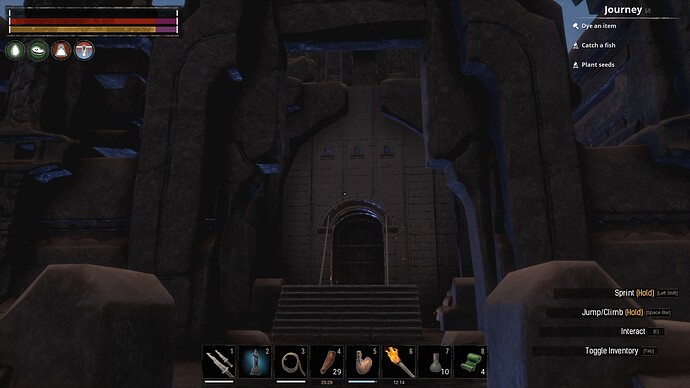 My backup base. I didn’t intend this to be accessible except with transportory stone. 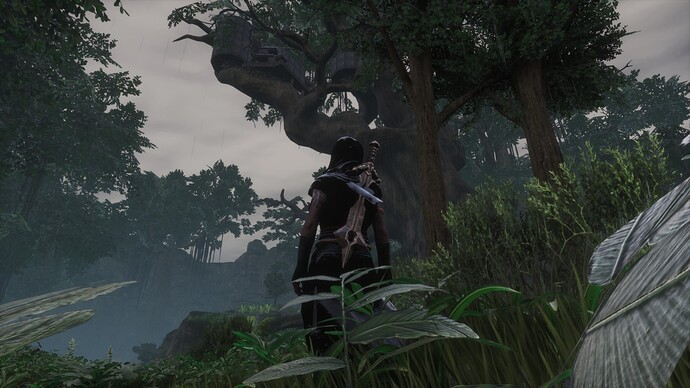 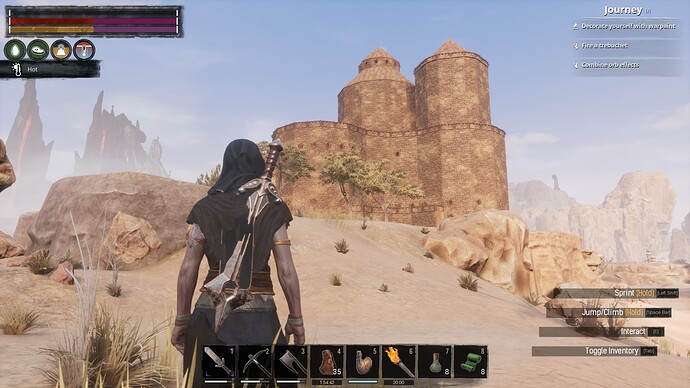 I’m still trying to figure out where i’ll put the summoning circle and transportary stone… speaking of which - I’ve never used it yet: does your active follower(s) go with you through it?

Yes. Followers will come thru it. But using it will cause demonic energies to give you LOC debuff which will reduce your hp and stamina by half for a few minutes. This ignores normal corruption limit, so if you use it enough you can have 1 hp.

I just remembered that I actually took screenshots of the interior of the main building this time. It was still only partially decorated, though. 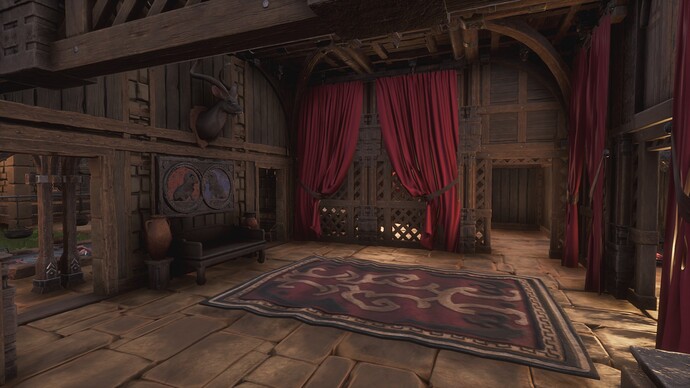 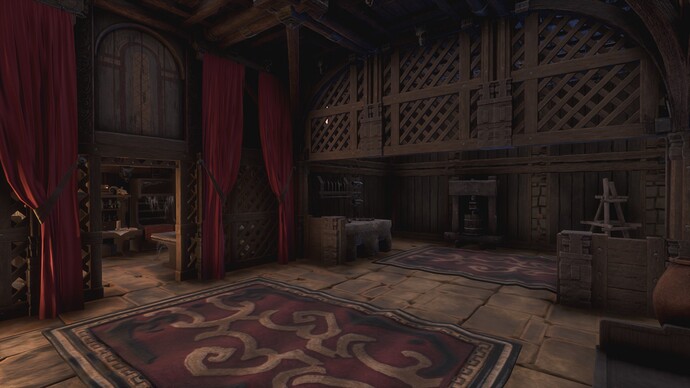 mod? or fc fixed the curtain? 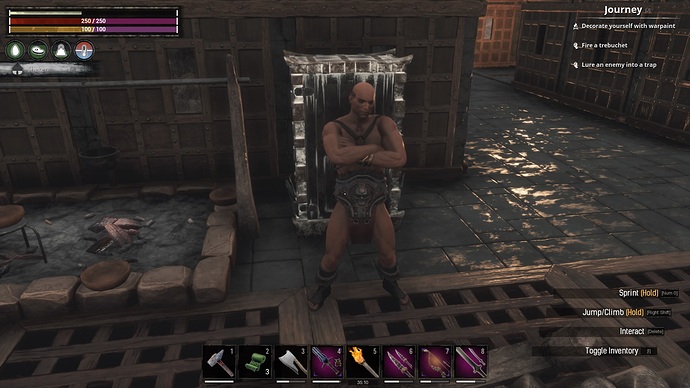 Just a detail from my currently expanding stronghold near the Mounds of the Dead. It started out as just a Wheel of pain, a cooking station to feed the wheel, and a freezer box to store food. But once I put a taskmaster to operate the Wheel, it turns out the orientation was accidentally spot on.

Thou Shalt Not Have Late-Night Snacks.

Good thing that you have access from the sides too

. In this game you can eat the whole fridge without remorse!

no, it’s just the regular paired curtains, not the individual one.

To continue my earlier post, heres some images of my citadel thats entrance I linked earlier.

Here is the great hall. I wouldn’t say its completely finished with decorations, but its there. 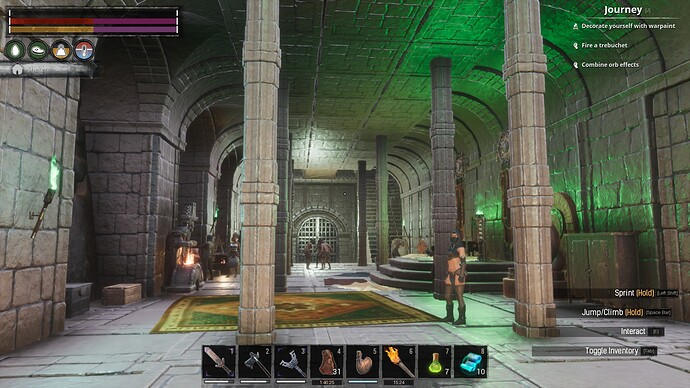 Underneath the great hall are the crypts. Here, covered by ancient indestructible walls and layers of T3 brickwork, slaves toil to keep my war machine going. 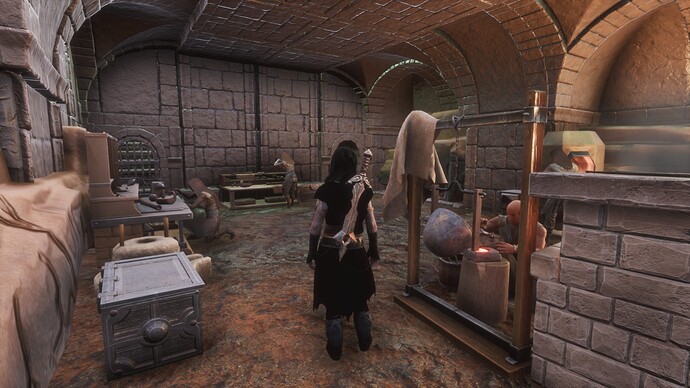 Above the great hall are among other things, my personal chambers. It would be cool if sunlight didn’t shine through all the structures, so lighting would be cool like this all the time, and not just during the night. Some of the battlepass items are really cool looking, particularly the skull braziers. 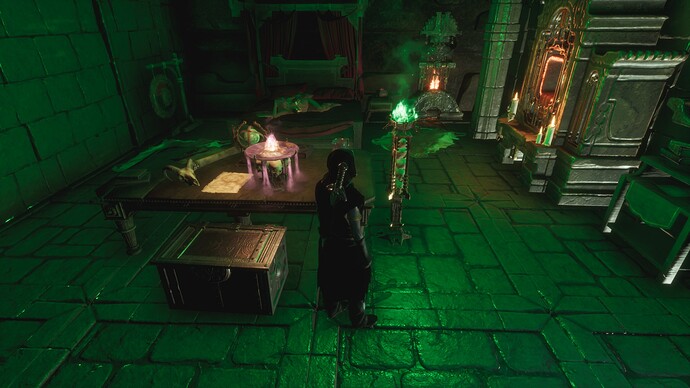 Here is me on my throne. Entertained by thralls and my funny talking staff. 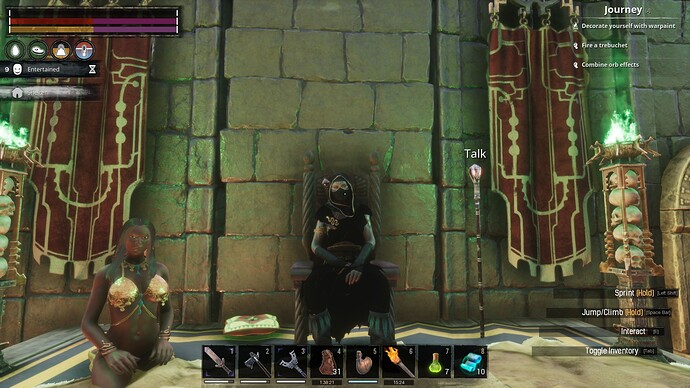 Here is a remake from a long time ago.
This is:
Stormwatch Keep

For a better perspective of this build, here is a screenshot from a higher view on a good day. 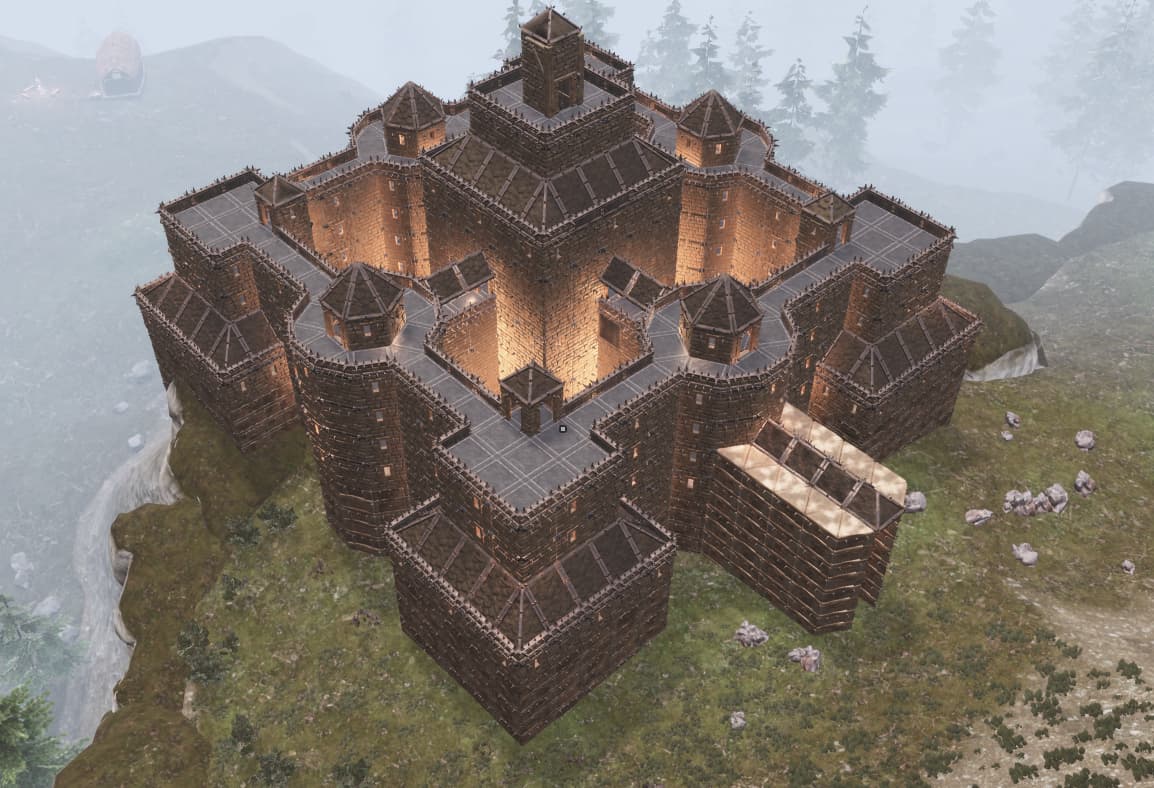