So where have all the people gone?

I just logged back in after being gone for a bit and at least over half the servers have 0-5 people. Sad to see a ghost town when ya log in.

The endless bugs which are not repaired forever… and the dlcs released despite the horrible state of the game right now which is like this for really long time, (some bugs more than 1 year old) eventually drove people away… I am one of them as well btw. A shame I liked the game when I bought it but I cannot play like this…

That was kind of what I thought…I was shocked about the DLC’s, seems kind of backwards to be marketing things to people that aren’t there…

The horrible gamebreaking bugs make the game basically unplayable. I have had to quit and wait for things to be fixed, too.

The poster has been spamming that the developers are going to kill people`s thralls in a couple of topics already.

Ha
Not if I kill em first if they don’t fit in a box they dead.

Please keep your comments civil and on topic.

Are you referring to me?
I’m still on topic
Where have all the people gone?
Answer
Away
Because half the community would rather the thralls be fixed before having to feed them.
I have too many thralls that I need to feed so most are going to starve to death now so it’s best they die by my blade instead of a slow painful one like starvation.

Deamo, i think, first wait to see how it is implemented, before jumping into conclusions, maybe things will not be that hard, and the goal is to get rid of abandoned trhalls. not to make people micromanage.

this patch will also go to testlive first, wait for feedback and for changes before it goes public…

Typically 3-4 full official pvp servers on PS4 during prime time, another 2-4 that are between 24-30 players a dozen or so at 15 or above, and then countless servers with 5-6 players

There are enough full servers at least in EU.
Even PVE Conflict Servers are often full.
Game is not dead.

Game isn’t dead but there are big problems. A lot of people these days only login to refresh decay until they stop doing that unfortunately.

A visualization of the issue.
https://steamcharts.com/app/440900

Lol sure, game is not dead… Nothing is going on… Business as usual… 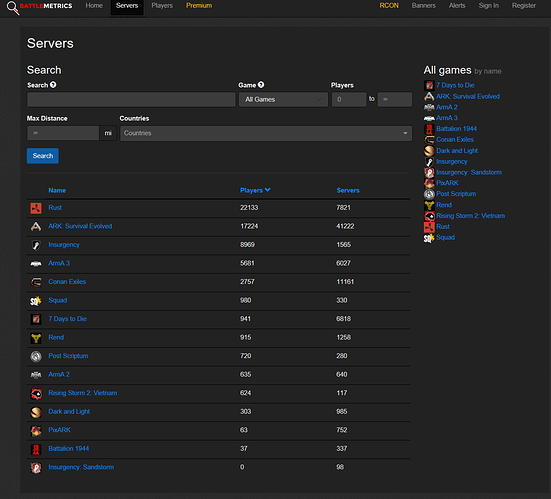 I’ll tell you where the people have gone, they have gone to a place where they fix bugs instead of milking their playerbase until they have no players left.

this patch will also go to testlive first, wait for feedback and for changes before it goes public…