When are you going to fix this? 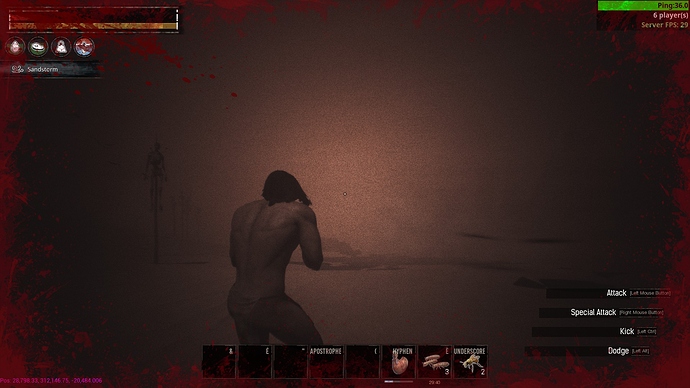 This feature is interesting. It’s not like the starting area is blocked. There are six different start locations, so it is easy to die and try again. You really can send someone back to pre-stone age.

The feature seems like a bug, however, as the storm rolls out every 20 min.

At some point, the path the sandstorm takes changed. It used to not travel south of the Noob River–literally, as long as you were on the southern bank, you were safe. Now, however…

It’s been like this for awhile now, which implies to me that it’s “as intended” & is unlikely to change.

In the path that loads when you start a Singleplayer game, there is one area that gives you 100% shelter (I use it to achieve the journey step early in a game). I don’t know for sure if the other paths have a sheltered location or not.

I have found that the sandstorm will actually damage you through a closed windowless building just north of the river.

It happens with wedges. If you stand on a square, you’re fine. If there is a wedge in proximity, you’re probably seeing junk fly-by during the storm.

When you are under 30, as soon as you see the bits flying buy, punch out of the game, go back to the server screen, wait 3-4 minutes and go back in.
We have saved many a noobs life by telling them this.

Guess I’ve been lucky, but every time I start a new character and the sandstorm hits, there has been a nearby spot that gives me at least 80% shelter and I ride it out. The odd thing is that what looks like shelter is not and what does not look that way is. Being that new, I eat a lot of bugs, but brush my teeth after.

I find a crevice or wall and move until the icon shows close to full. Still, they seem to be the oddest spots, certainly not intuitive.

This is an old bug, and it’s been around for almost 2 years.
I don’t think they actually know how to fix it. The last time they tried, we got the invisible and phantom sandstorms we have now.

I brought this up last December.

When are you fixing the sandstorm? PC Discussion

Game mode: Online official Type of issue: Bug Server type: PvE Region: America Remember when the sandstorm got broke? Remember when you said you were going to send a note to your team regarding the sandstorm trajectory? I was just watching an old episode of Neebs Gaming. That video was posted November 2018. Which means the sandstorm has been broken for over a year. It used to go directly east. I know for a fact it only just grazed the north tip of the Shattered Bridge. Meaning the southe…

We’re aware of this issue and it’s in our team’s To-Do list. However, we do not have any estimates yet as to when it will be re-prioritized and tackled.