Hello! A very long time interested in the question about Steam achievements. Will they be in the future?

When this question has been asked before, the answer has been “no, and we aren’t going to.”

I know, it’d be cool to have all those achievements logged on your Steam account to show off, but you’ll just have to settle for the in-game Museum and Dr. Caligari to reward you.

Do you know who said that. I never got an answer to that secific question…same with steamcards.

I was paraphrasing the wording but it’s been asked on more than one stream, both via Funcom and BTV.

Do you know who said that. I never got an answer to that secific question…same with steamcards.

There were Steam cards in TSW (no achievements though)
As long as SWL replaced TSW in Steam, the same cards are now linked to SWL : 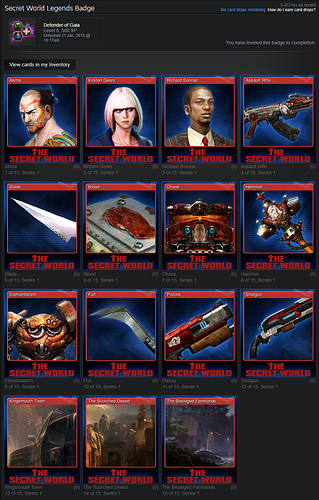 I meant more dropable than in existence. You need to buy the steam boosters to get those instead of having some drop for you over the course of play. And honestly I wouldn’t mind more even if they recycle agent system stuff.

My bad, should have been more clear about it.

I should have been more specific and precise that’s a Steam constraint.
The thing is it would have been possible to add new Steam Cards and new Steam Badges to SWL if it was a new product on the platform. But as TSW was just renamed as SWL in Steam, those features can’t be altered any more

Achievements in Steam can continuously be added after the release of a game though.
But it’s unlikely to happen because you usually bind the achievement’s triggers in the course of the development of the game