Suggestions for the development of the game (my personal opinion)

Greetings all.
This is my first time creating a thread here, so please don’t scold me if you think I’m doing something wrong.
I apologize in advance for my English, I use applications to translate text. I want to make some suggestions, which in my opinion may well good affect the game itself. I understand that the developers at the moment are busy with the development and implementation of the patch 3.0, but I hope that something I wrote will find a life in the future or is already under development, I do not know exactly. I will try to be as detailed as possible in my thoughts, describing the benefits and necessity of each them. I am not technically savvy and my knowledge of writing code, working with databases and creating games is poor, so please do not criticize severely, because it is nothing more than thoughts and ideas and I may not realize all the complexity of technical implementation. I don’t dictate and don’t demand how it should be done, this is nothing more than my personal opinion and wishes.

• Schedule for “Dynamic RT”
The game already has a schedule for days where you can set the time frame for dealing damage to buildings, but for some reason this feature is missing for the dynamic raid time type. In my opinion, this setting is underrated.
As you know, on the same server at the same time can not be present a large number of players and the size of the capacity of the server have to decrease, so that the quality of the server did not deteriorate. Now it is in the neighborhood of 50/60 players per server, for a more or less optimal game. However, there is a problem where the server conventionally plays 70-80 players, but places only 50. And in the days of raid time, more than 20-30 players can not go to the server, lose their game progress. This leads to the fact that the demand of the server ruins the server itself, resulting in a frequent need to restart it from scratch, in order to attract users to try again.

Suggestion: Add a schedule schedule of days with time intervals for Dynamic raid time type, as implemented for normal raid time. In my opinion, this will allow many users to stay on the server for a long time. Since most players are people over 25, as a rule, all employed, and many simply do not have time to go into the game to raid time after work or hang in line for an hour or more, so as not to lose their game progress on the server. Meanwhile, their buildings and game objects are destroyed, as long as users are not on the server. With a schedule of days for dynamic PT, this can be avoided, where the user’s buildings will be invulnerable in a specified period of time. That is, the owners of the servers specify a time period in which it will be possible to destroy buildings and, if the user could not log in for any reason, he will not lose his base, and as a consequence will continue to play. It seems to me that this setting will also keep players in this game and not so quickly burned by injustice when you could not enter the server because of the queue, and you were destroyed without giving any chance. 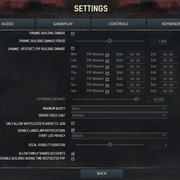 • The “Build Damage Multiplier” setting
As many of you may know, for a few years now the “Buildings Damage Multiplier” parameter has not been working quite correctly, perhaps it’s the intention, I can’t know for sure, but nevertheless. When setting this parameter to its lowest value (0.1), objects like “Doors”, “Lift Bridge”, “Gate”, “Hatch”, “Hoist”, etc. receive full damage, regardless of the value of the set parameter.

Suggestion: Try to fix this, or give the right to choose, by creating an additional setting that will regulate the conditions of damage on this type of objects, with a reduced value of the “Buildings Damage Multiplier” indicator. Add the ability to set this setting to 0.0. This would remove the ability to deal damage to post units, but make all satellites on guard active. I believe that this change will allow to add all sorts of active events on non-modded private PvE or PvE-K servers, as well as help develop projects that have chosen the format of the 24h raid time. As a rule, on such projects decreased the value of the parameter “damage multiplier of buildings”, but because of the passability of the destruction of another type of objects (conditionally a door) has not received its relevance.

• Queue
The addition of the queue, was a pleasant surprise and as far as I am concerned reduced the load on the server, due to the fact that users have stopped spamming the direct connection to the server and are forced to stand in the queue, waiting. However, it is very frustrating that there is no way for server owners to influence this queue.

Suggestion: Implement the ability for private server owners to create backup slots for their administration (or themselves), or set a priority status to launch to the server users by their SteamID, bypassing the queue, so that when connecting to a full server, if there is a queue, the user gets queue status 1. Similar to how this is implemented in DayZ.
Often game server administrators are not on the server, so as not to take up precious space for players, but at certain moments there is a sudden need for an administrator to enter the server, but he does not have this opportunity, as he is forced to be in the queue and sometimes just can not provide the required assistance from the user in the game.

• Tools for Transfer
The implementation of transfer (transferring a character from one server to another) - I think one of the most correct and great solutions. Especially the settings that allow you to create your own “ecosystem of servers”. However, would like to have the opportunity for owners of private servers to set the conditions of transfer themselves, in contrast to the standard, set by the developers themselves.

Suggestion: Add a tool (possibly commands in ServerSettings.ini) so that the owners of servers could change the frequency of transferability of the character between their servers, up to removal of these restrictions and changing the conditions of transfer and their timing, allowing their own influence on the timers.

• Conditions for displaying the list of servers.
For many it is no secret that the popularity of mod servers leaves much to be desired. For owners of such projects, have to put a lot of effort in order to somehow PR their projects and attract some additional resource, to the server entered new users and projects lived. In my opinion, there are many worthy mod projects that remain in oblivion. Many users are not even aware that there are mod servers, I say this based on personal experience with the users. Just a mods often help, in the case, when in consequence of updates there are some problems in the quality of the game clients, as it was on the example of the implementation of the "rain, which does not get inside the buildings. Most users in rainy locations FPS of the game client fell to 5-10 fps and had to install a server mod that turns off weather effects, as the setting in the game reset automatically after each restart and after a certain period of time. In the game setup files I could not find the lines that were responsible for this parameter, as I realized that they are sewn into the game client code itself. Yes, this was fixed later, but not in the shortest amount of time, as in my opinion it should have been. Or the problems when users twist themselves characteristics, setting 50 all, and to check such users for honesty, we had to download server backups, look for the location of these characters and check with their values of XP \ Stamina \ Armor. Many servers connected not a little known mod Pipi to track this online, as well as the quality of the connection of users to the server to understand whether this user uses any software, to influence their quality of connection to the server to get certain advantages.
In my opinion, the problem is that users going into the section “Play online” and seeing the server list window, do not see the additional filter options, in particular the sorting item “Show servers with mods”.

Suggestion: Change the conditions for displaying servers in the “List of servers” so that initially all available servers are displayed, so that by sorting by online players saw modding servers. Sorting item “Show servers with mods” change to “Do not show servers with mods”. Also add a column to the sorting of servers, which will put a kind of label, whether the server is a mod. I believe this will help modding projects find their audience and help popularize the game itself, as modding projects often attract more attention on the background of the proposed game content, due to the used mods. As an example, I can cite other gaming projects, such as Rust \ Myth, where in search of servers originally present modding servers, and they are marked. The same Dayz, where DayzLauncher was implemented, through which you can find all the servers, including mods and automatically pre-load all the mods when connecting to the server. You can also add a section “Servers” in the launcher Funcom, in the section of the game Conan Exiles. (Game \ DLC \ Mods \ Servers). Where users, without entering the game itself, will be able to choose a server to connect in advance and go to the server using the Launcher. If it is a modding server, mods will be downloaded in advance and run on the server without having to restart the client. 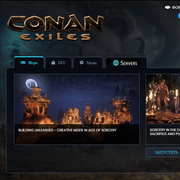 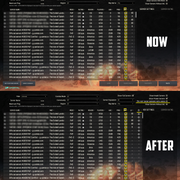 • The order in which players connect to server.
I know that most likely they write a lot about this, but I decided not to pass by this
As many people know, there is a significant problem when a large number of players are trying to connect simultaneously through a direct connection to the server after a restart or crash. The server core usually does not have time to process data requests to connect each user, so the server hangs and gets up in a state, popularly called “1020”. Lasts from 10 to 30 minutes or more, depending on the intensity with which the server spits out the players to reduce the load. Have to make additional manipulations to run the players on the server, put passwords, hide IP addresses or change ports. In previous versions of the patch, this problem was solved by adding spam sorting lines in the Engine.ini file [Core.Log], so that the core ignores these lines of requests, and this problem did not arise, but now these manipulations do not bring the desired result.

Suggestion: Implement some kind of sequence / delay in connecting users, or in the case of a large number of simultaneous connections, if the threshold exceeds conditionally 10 users, add to all the following some delay in seconds to connect to the server. Add this as a parameter in the file ServerSettings.ini on the example of the queue, where the owners of private servers decide whether to include them in the queue or not. In the same way, try to implement this setting, with the ability to specify the time interval of this delay in connecting to the server. Or consider other options, which in your opinion can help to solve this problem.

I hope you’ve read this to the end. I apologize for such a large amount of text