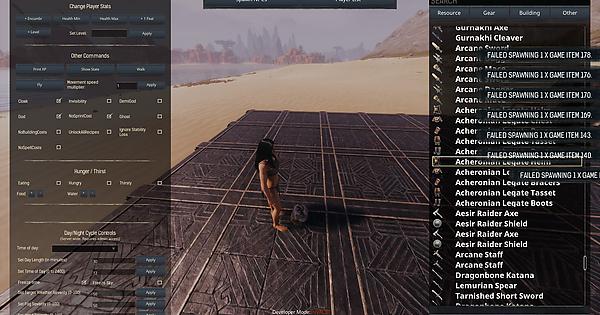 Boy do I have some good news for you then, building materials got reduced in weight

Atleast I know in icons how they are looking

After more playing (SP - no mods) I would like to thank Funcom and the play testers for their work on some of the weapon hit boxes. THANK YOU!

I appear to be having less issues with the daggers (although the croc world boss was still wonky) hitting their target. I also have not had too many issues with the sword (it used to glitch up on me with wights).

However, there is still more work that needs to be done on hit boxes. For instance, when fighting skeletons or the bosses (Guardian and Brute) in the UC I will often be behind the enemies and will get hit. This happened against a skeleton that was doing a straight, thrust with it’s sword. No way my character should have been hit as I was on the opposite hand/side of the attack. Also, standing in the same basic location where I would get hit would not result in blocking an attack with a shield.

I think that quickfooted would be the first agility perk, what do you guys/gals think about?

Anyone knows when the mod kit IS going to be available, I’m already thinking of ways to fill the gap in spells

Station craftable deco pieces do not return to the quick bar when picked up. The drop back to inventory.

Kind of annoying to have 2 systems with the new ‘construction hammer’ system and then the old placables systems for decorative beams and wooden fences.

(Also, my cooked meat disappeared from my large campfire. I only noticed because I was going to head out on a longer trip and realized there was no cooked meat to take along.)

(Or I’m an idiot and didn’t look in the other campfire. Jeez.)

Blathering on with something I noticed: Is there a reason why the stone axe will gather bones, but the iron axe will not? Gathering bones early on seems harder than you would think.

(Oh, only not from animals. Humans give you tons with an axe.)

Dunno the numbers, but Hatchet seems kinda like the general purpose, not great, version of other tools.

Pick for Bone. Skinner Knife for hides. Cleaver for meat.
So hatchet just kinda gathers each of those as a possible, but not as efficiently.

the client is crashing often

It really seems like the stone hatchet gathers more bone, but it looks like people and birds give bones with the hatchet (and probably the pick)

So I have my first real dislike regarding 3.0…

The loot chest respawn timers have been worked on to keep the SP gamer from exploiting them by switching quadrants and then going back to the same chest (chests). This is a great change! However, the enemy and NPC spawns are not on a similar type of spawner. I just lost a lvl 10 RHTS to Gothrad and his minions because my character was killed… by Gothrad, whom my thrall was dealing with. I was taking out the last archer when Gothrad decided to stop attacking my thrall and instead attacked me. This is another great change! The issue is that when I went to get my equipment back all of Gothrad’s detail respawned. This made it almost impossible to get my gear and also sentenced my RHTS to death. So I would like to kindly ask that the enemy and NPC respawn timers be redone like the chests. This will prevent other SP players from feeling like the game is cheating to kill their thrall.