The story of Garth the frost giant

Garth was a noble and honest frost giant who would serve his master no matter who blew the horn. Garth had several masters all of witch treated him like a tool or a monster to do there wicked bidding. All of his masters ended up the same.
Dead at the end of a nobles blade. Except for one. This one was different she blew the horn and then out of thin air he appeared out of nowhere like always. This time though he was greeted with a smile not an evil smile like always but a kind one. He heard her say hello I’m Frey it’s nice to meet you. Garth was confused never had he been greated like this before but as his duty as the guardian of the horn caller he said . Aye lass I suppose it’s kind to meet you as well.
She smiled and said so can I ask for your help? He said Aye with a toothy grin. What will it be Garth asked. Frey replied: can you help guard the area while I build us a keep. Us? Replied Garth. Frey said yes with a smile your apart of my clan now right? … Unless you don’t want to be she said sadly. No replies Garth it’s a new way of thinking … I think I like it. He said with a toothy smile.
And so Garth was helping protect this plot of land from the occasional dangers and nuisances all while He watched as this Frey human built a beautiful keep and she would always ask if he is ok or needed anything? He really liked this master she treated him with respect. And he was happy to serve not as a tool but a friend.
The keep was finished and new people started showing up he was now guarding the Exalted Alter of Ymir. He was happy but then one day Frey was panicked she was placing animals such as elephants and undead in defensive positions outside the wall. Garth asked what is wrong child with a worried look. She said we are about to be attacked. By what? Asked Garth. I do not know replied Frey. I can’t be here when it happens the gods are making me slumber she said sadly. Don’t worry child I’ll handle it and keep the place safe said Garth. She asked: can I ask you to guard the outside of the wall? Aye I’ll defend it with me life said Garth with a chuckle . Frey said thank you while wiping away tears.
There Garth stood outside the wall two helpers he only seen a few times where there to help direct forces to defend . Then out of nowhere came the silent legion wave after wave they fought and animal and undead lay together on the battlefield. Garth stood his ground defending the west wall by himself sometimes he would get help from Frey’s personal body guard Donny a cimmarian berserker who was so strong even Garth wouldn’t dare fight him. Not long after the final wave was over came … HIM . A tall black figure in unholy armour. Garth was Alone. For Donny was off fighting elsewhere at the moment. Garth new how powerful this foe was and still raising his axe and screaming I WILL NOT LET YOU TOUCH THIS KEEP he bellowed as the memory of Frey crossed his mind.
He charged knowing he wouldn’t win but was hoping to at least buy enough time for Donny to get back and slay this unholy foe. Donny faught with all his might. But no matter how bad he was losing he still kept him away from the wall hoping Donny will be there soon. But alas it was to late the unholy monster lifted up his sword and struck Garth down. Garth fell to the ground bleeding and drained knowing it was the end he lay there but as he draws his last breath he saw Donny and smiled and said. See Las I told you it would be okay as he finally passes.
Frey comes back from her slumber and she assess the damages to the north and east wall. Frey approaches the west wall sees it’s undamaged and smiled. That smile quickly faded though when she didn’t see Garth . She sprinted to the wall and found on the other side was Donny kneeling next to Garths lifeless corpse. Frey dropped to her knees and cried and cried for hours until she finally got up. She stared at the the alter of Ymir and knew what to do next she built a shrine in memoriam to her frosty friend. Here lies Garth a wonderful giant and friend. The end . Based on a true story on Eu server 2016 P.V.E… R.I.P. Garth 8/23/2019-10/24/2019

Rip Garth may Ymir guide you to a frosty heaven filled with much joy. At least he watches over you now frey

That’s a wonderful story right here, got me some tears out

Remind me of myself doing RP in all the games I play ! I’m always making really big bond with my men and if one of them die, I’m always crying so much

I’ll make a memorial for Garth in my cemetary ! 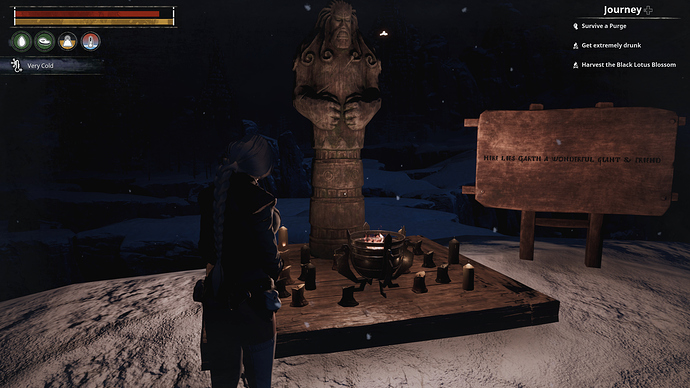