Playing 5h daily to have chance to protect sounds like chore like You said unrealistic for most of people. Also relying on thralls to defend while someone is offline is kinda pointless and not fun for both sides (attacker or owner of structure)

You guys are afraid of Rock Slide? Hmmm… Nya… just need a few potions is all. Here’s two berserkers and I, cleaning him up. 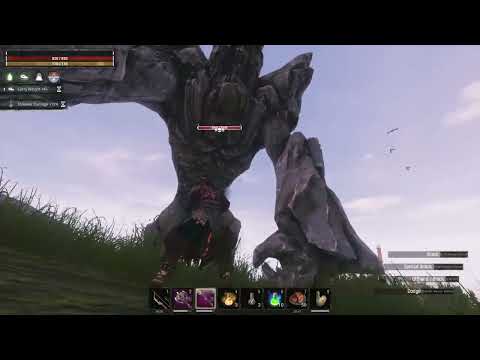 Sorry, I forgot I had godmode on for the first 30% of the fight.

During purges, the Rockslide won’t be alone and the King Rocknoses that come with it also knock thralls and you down. Pray you never have a disconnect during one, @TeleTesselator .

I won’t see the video, since I killed Rockslides alone many times. But kudos anyway. It is a hard opponent.

Doesn’t matter… Other rocknoses die in one hit!!! The one skull bosses die in 2 or 3 hits as this video shows.

And sure, if you allow Rockslide into or near your base he does a lot of damage. But he will follow YOU almost always so just lead him and the others away from the base… simple as that.

A friend and I just had the purge on vanilla Savage Winds yesterday. Four blocks were slightly damaged. We killed each enemy in less than 3 seconds each. When Rockslide showed up he damaged 4 blocks and killed a sleeping White Tiger (level 0), a sleeping “Tor” Playful Pup (level 0) and some named thrall that was set not to attack anything - also at level 0. And that was the total loss - all in all. I had to use only one potion but I was hanging back mostly too (protecting my level 8 White Wolf) while my friend did all the work.

tested dalinsia with full authorit, she toke half of rockslide hp on melee, tested with 2 followers and they performed worst than one alone with well trained perk. Before the rockslide could kill both the testlive client crashed to desktop. I think that to beat this guy in purge i will need, a top follower with well trained and two or three more that will inevitable die. Im enjoyong the update so far, think that before thralls were good, now they are ok

If they manage a lvl 6 rocknose purge, they are good enough.
That’s definitely reassuring.
I’m happier than I was before @TeleTesselator and you, @EduMariano , posted.
Still a bit sad, but… things are looking better.

With middle gear people will die.

You should be able to take him in a purge - even just yourself and one or two followers - with no guards. With a few guards it would be total cake! Of course I mean leveled thralls though. The ones following me in the video were level 20 and I at level 60. 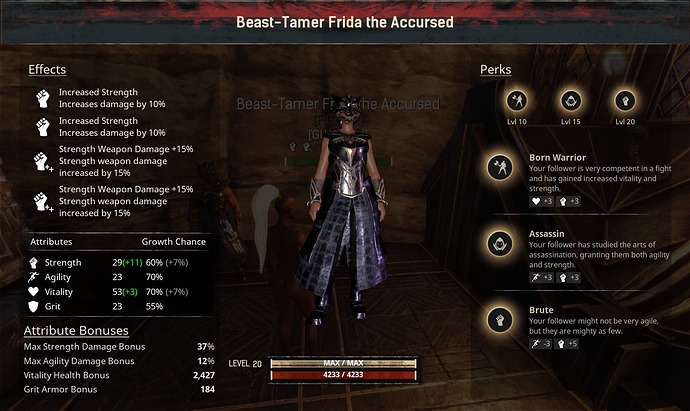 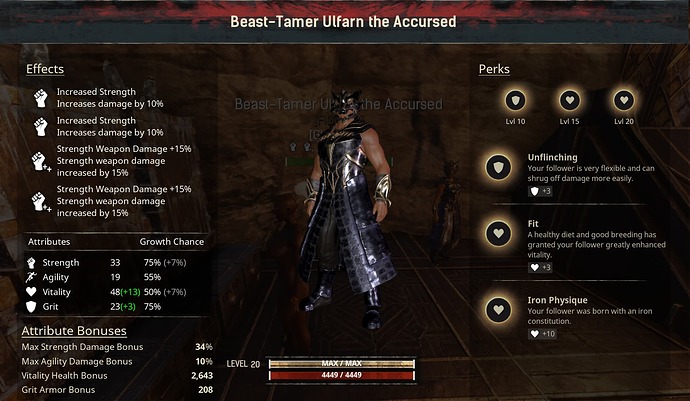 The fear of Rockslide is when or if he spawns inside your base (which happens but is kinda rare). He can occasionally one-hit T4 walls and roofs and he just rips up T1 and T2 blocks like tissue paper.

Except for Rockslide himself, the Rocknose purge is one of the easiest - only slightly harder than an Imp purge.

With middle gear people will die.

Doubtful! But that’s what bedrolls are for…

I was wearing light armor! 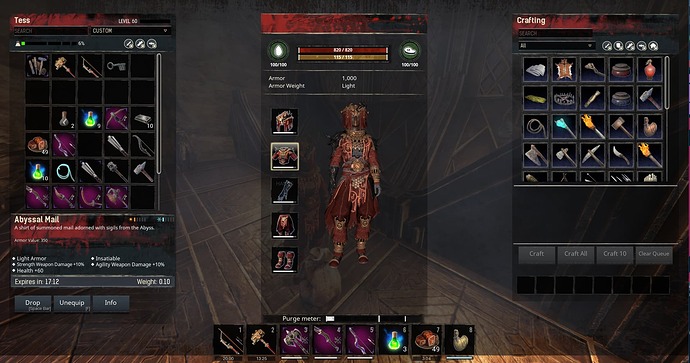 @TeleTesselator
Nop, you have two thralls with you

.
When I say solo I mean SOLO. He is the only boss in game from both maps I still loose 9 to 10 fights. The one has to go flawless, but it’s easier on arena. On arena actually it’s very difficult to loose, you have no rocks or mountains, etc to block your dodge. Even now it’s not an impossible fight but it’s the hardest indeed. The new agility will grand me dodge with armor pen and hit without stamina. Imagine, light armor 1000 and predatory with extra armor pen, he is so dead, so dead m8.

Here’s two berserkers and I, cleaning him up.

Yes he’s harder all by yourself. You need to range him if you’re solo - and that takes kind of a long time. You need something to take his aggro otherwise - a rhino, or a thrall… something. And that’s needed because his reach is like 6 or 8 times your own and he hits hard - so need time to move outside his AOE and down an aloe potion every second or third time he hits you.

@TeleTesselator
Believe me, ALL the boss fights are extremely balanced when you go alone, they have done tremendous excellent job on it. All you have to do is look the beast in the eyes and the next move is extremely predictable.
Don’t try it with rockslide, try it with others and you will understand what I am talking about, you’ll love it