What happened with weapons with bonuses, such as +5 STR, or +2 for all attributes? I did not see anything regarding them in the patch notes, that’s why I’m asking. It is a bug, or intentional? @Funcom_Community @Community ?
I ask before making a bugreport, there is a chance it is intentional (I HOPE NOT).

Seems like the devs missed those weapons completely, rendering them almost useless - they now have the same stats as 99% of the end game weapons in game now. Nothing special.
They did not even raise the stats to compensate?
Or why didn’t they just add +x% to said attributes, like for example the Lion slayer: pre 3.0 it has a +5 to STR. Now nothing. Why did they not add +10% strength weapon damage to it?
Another example: Vein cut: it added points to every attribute. Why did they not add flat 10 HP, 20 armor, 10 stamina, 15 carrying capacity, 5% str/agi weapon damage, 5% follower damage, 10% concussive damage (numbers are just example values)?
I think it is a(nother) huge mistake, an overlook the devs made. I hope it is an overlook and not intentional.
What is the devs’ goal with making weapons the EXACT SAME COPIES OF EACH OTHER by removing the special abilities, and addig new “weapons” (reskins) to the game? There is no value in them. Useless, pointless datas that only take up space, provide no value.

I discovered it yesterday, and now it seems I spend countless hours to farm eldarium, high end gear to delve, just to throw out stuff? RNG itself is a joke, now the rewards are a joke too? And yes, you’ve guessed it I’m pissed. Just like I was when they destroyed the Voidforge bow, Lifeblood Spear, Healing waterskin… Those are 1-1 weapons, but the anger is udnerstandable still, but making the Sword of Crom, and at least 5 weapons useless in one go? Nice!

Very intentional. All attribute bumps were removed from weapons and shields but other effects are still valid (poison, bleed, corrupted, gouging etc).

I hope legendaries get redesigned with these special features in the future since their attribute bumps are gone and they are not so legendary anymore.

That’s what I was afraid of.
So basically we only can hope now that they will make them somewhat unique again, but as far as previous “de-uniquing” went, these weapon will remain as they are now, without anything special.

It is frustrating, because not only they cost eldarium, but heavily RNG based to get their recipes, now they offer nothing to compensate that. We are better off crafting star metal/obsidian stuff. Yayyyy!

I’m gonna report this as a bug anyway to alert them, and HOPEFULLY they will do something with these weapons.

Legendary weapons, on the whole, are not worth using or farming anymore.

Another thing that was mentioned during testlive that was ignored on release. One more item on the FC please-fix list.

IMHO, they weren’t all that. SoC sure was top but not worth the effort to farm since Telith’s sorrow was close enough and significantly quicker to mass produce.

Most of them sat on my wall as decorations and when SL light and medium hit, the legendary armors also became irrelevant.

How many legendaries we can use now? Non-craftable, TRUE legendaries I mean.
A handful of them. I did not mention, but Yog’s touch is an inferior choice after its “balance”. Ancient lemurian axe with a master fitting on it, and done.

Okay, a lot of the craftable weapons from the same tier, such as vanilla star metal and DLC ones has identical stats, I can (not happily tho’) live with it, but legendaries, and stuff that lies behind RNG, and even the mats are hard to find sometimes… Why?

“Oh, I farmed a lot of enemies to get some eldarium, died a lot, was lucky, and at the 56th try I got the recipe for Lion slayer, but the meantime it costed me 2800 eldarium bars, so I had to grind even more! Sh*t, I don’t have enough to craft it, let’s spend a couple more hours to gather eldarium… Finally I crafted the sword – which looks like… THE EYE OF THE WATCHER?? Aw maaan… anyways yee! But let’s craft an obsidian sword too, just for fun. Hmm, this sword is slightly worse than the Lion slayer, but costed me almost nothing, only some feat points, which is not hard, a run in the UC without hitting a single enemy gives more points that I need to unlock it. Dang… all those days/weeks for NOTHING?”

I call this BULLSH|T! When they destroyed the Voidforge bow I was upset they ruined an other uniqueness, and hoped they did not do it again. Especially after the previous “ruinings”. But nooo, they did not learn, heck even! They ruined multiple weapons at once!

I don’t have a problem with random drops in legendaries, but all that frustration of getting it now seems utter useless…

I can craft a stronger Lem Axe than the Yog’s Touch, but the Yog’s touch is harder to get.

I will do some tests in the weekend.
I started yesterday with the Yog’s touch and the Ancient lemurian axe, the lemurian axe beats the touch as you said.
I will spawn weapons that were once true to their legendary status but got castrated, and will craft weapons that are available, easily learnable to compare them and see if it’s worth grinding for some delved weapons and chest/boss drop legendaries.

@rolee9309 I believe the priority here was to get rid of attribute points on all gear so they simply did a bulk eradication of said item properties without going in to edit and redesign every single item individually.

Why? Because they just swapped to a completely new attribute system where individual points became insanely powerful which is why you only get a single one when you level up and 5 points unlock a perk.

This would’ve resulted in many items being completely game-breakingly ridiculous allowing you to unlock additional full perks, totally throwing the system they worked on out of balance.

As an example my server has the mod Emberlight, which adds some additional legendary items that were similar to the already in-game ones, so nothing spectacular.
The authors however only just finished going through all of their items and removing the bonus attribute points so I could try a couple of them within the new system.
For example I had a shield that granted 5 Vitality when equipped… doesn’t sound broken or a big deal in the old system, right?
However… my build also happened to have 10 Vitality points in it… so what happened when I equipped that shield? I received 100 HP from just the 5 Vitality points as they are much more potent now than they used to be… however that also unlocked my THIRD perk in Vitality, which also granted 100 more HP… So essentially… equipping that shield… my HP went from 400 to 600… which seems quite a bit excessive imo.

So I believe their main purpose was to quickly go in and mass-remove all the attributes from gear to prevent anything like the above. I think it’s more understandable if you think about it like that.

I also think (or more like hope) the reason they didn’t bother to specifically redesign each item and replace them with the new version of stats because they read all the posts about legendary items becoming quite weak throughout the years so I believe they want to go back and take a second look at them when they get a chance, possibly design some new system around them or at the very least redesign the items individually. But that wasn’t in the scope of the 3.0 update yet as they have plenty of stuff to do rn.

I understand it was a massive update, but the amount of gear that got indirectly nerfed are not a slim slice of the whole cake. Not that small that it would be an oversight.
So I hope you are right, and legendaries (crafted ones included) will get a lift-up, and that’s why.
But not mentioning these changes in the patchnotes is a miss in my opinion.

I’ve done some tests with the lemurian axe/yog’s touch, and was mentioned, but here are the pictures: 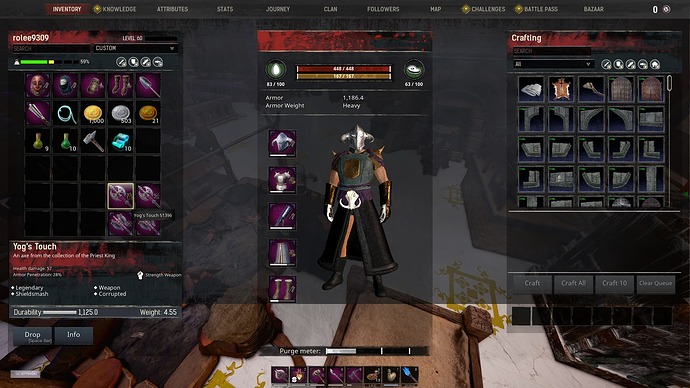 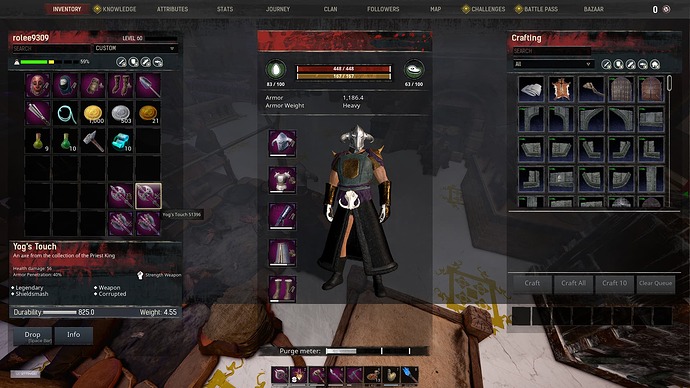 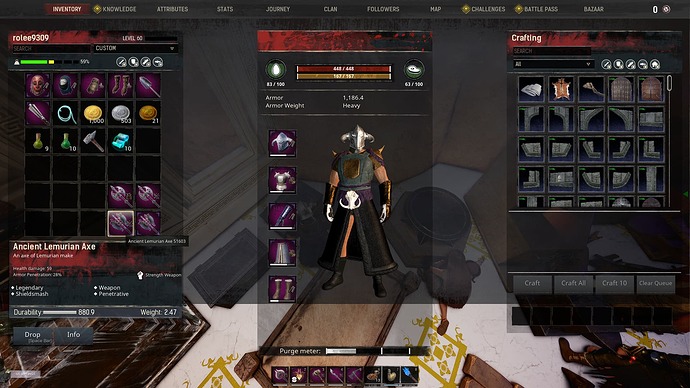 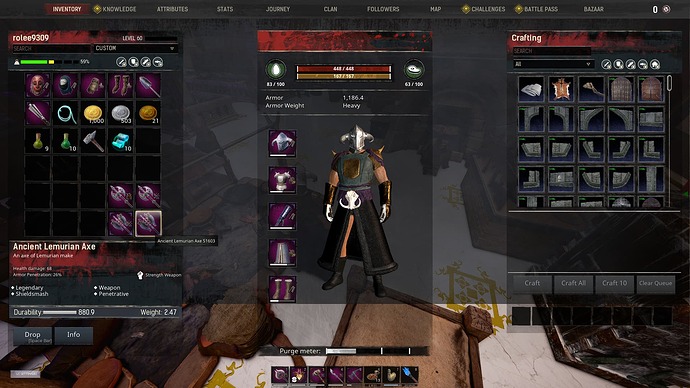 Wait… what?.. the bladesmith adds THIS much damage for the cost of a puny 2% AP?

Yep, they add 23% damage bonus! Imagine a Voidforge gladius, you craft one, smack a master fitting on it, and it’s damage is 95+, AP is around 20%. And it poisons…

I always use bladesmiths, very rarely temper/edgesmiths. Only for a couple high enough damage weapons that missing the damage bonus from an edgesmith won’t really hurts it, are crafted with them.

At first I thought maybe the legendary weapons still had a purpose in that you could use them as the basis for an illusion, but then i was told you can only transfer the appearance from items you can make.

So I guess not.

So it all depends on what u fighting!!!

That is not necessarily true in most cases, it depends on the armor of said boss, so the second part is true, depends on what you’re fighting

Oh btw, made a spreadsheet of the monster table for that if anyone’s interested