What would you like to see added to the game? (Encore!)

Took me a couple days to compile (and I’m sure I’ve forgotten some things), but here are some other things I’d like to see added or improved… 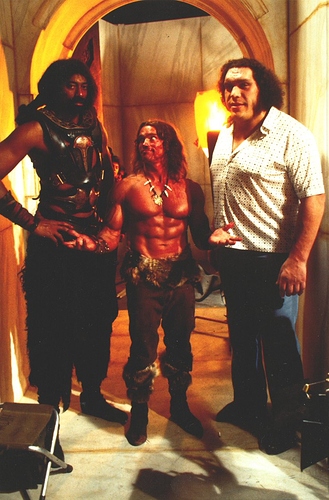 I feel as if the devs are Mocking me. I am enraged. There are 2 major updates not in game. Sorcery and settlement system was suppose to be Major updates. I feel cheated. I feel betrayed. I feel like those 2 major updates are not coming to Conan Exiles. I also feel like every post in suggestion is not being looked into. I feel like every suggestion topic is considered junk mail and spam. This topic in General Discussion is the reason why I feel this way. “What would you like to see added to the game?” sounds like a suggestion topic.

Hah, well yeah, ANYONE would look short next to those two!

Seriously though, Conan is supposed to be over 6-ft tall, and yet my short-statured female is only a shade shorter than him. They need to at least set him to the tallest height available to in-game characters.

EDIT: Didn’t see that you had quoted @Necro, and thought that you were responding to my comment to buff Conan. Yeah Discount Lagertha should definitely be on the same scale as Andre the Giant and Wilt Chamberlain, but Conan should still be taller than he currently is.

AI for Thralls needs be smarter

More than 1 thrall to follow you… 2 would be good

Ways to beckon/provoke the Purge to a specific base of yours would be good, as has been previously mentioned.

A more complicated addition would be an “anti-purge” Outpost system: when a Purge-like bar fills, add an NPC Outpost somewhere on the appropriate map region in unclaimed land. It would be a lot of effort, but a couple things could make it less outlandish.

To make Conan Exiles a legendary game they should apply the following:

Hi, i think this is what i wanna see in game CE in future…

You can’t sell thralls yourself, but in Floatsam there is a vendor that sells thralls for gold. You get a random level, which is kind of a pain, but you may get lucky, if you’d rather spend your time farming gold than knocking out thralls.

Fix the old physics bugs, double the options for character creation, and add equipped weapon slots so that they show on the character when holstered, instead of pulling them out of thin air.

So many great suggestions here. I haven’t had time to read through them all, but I’ll list my personal wants here.

Same things I always want in this game.

I’d really just love to see these things added and worked on. Something to go beyond what seems to be the primary focus on all the latest updates I’ve seen. Which are all combat focused.

Conan Exiles
“First I would like to say you are some awesome developers for creating this fantastic game. I have spent soo much time in it, and my ideas are just to make the game i love even better”
Things i would like to see be made

My top 10 most important

Bring in a reporting system where you can efficiently report bug using players and let them actually have any kind of punishments even if its only for some days. I dont see any reason why a game would want to keep cheaters in it to frustrate hundreds of people.

Outside of the standard updating/clearing out of reported bugs, here are ideas from my end of the pond - which is mainly within the Private Server domain:

Although it’s not exactly a game addition, it would be nice if the Devs would slip in extra, unannounced stuff to the game every Update. Perhaps a new boss creature here and there or something storyline-based. I understand that the Exiles game lifespan may have gone longer than expected, but it would be nice to know that there is always some random easter-egging out there to keep things fresh. I know some stuff gets added already, but randomised things that inspire players to keep wandering the map and visiting places are welcome.

If you do nothing else in the next update, please fix the buggy thrall AI.

I am so frustrated by their inability to use weapons or cease attacking once switched.

Also, the damn truncheon or blunted javelin keeps killing my targets. What the hell is this about? Some sort of critical strike?

Red Sonya? Ghita of Alizzar? The characters from Fire and Ice?

Red Sonya is a marvel propriety, Conan is public domain.