When are you fixing the sandstorm?

Remember when the sandstorm got broke?

Remember when you said you were going to send a note to your team regarding the sandstorm trajectory?

I was just watching an old episode of Neebs Gaming. That video was posted November 2018. Which means the sandstorm has been broken for over a year.

It used to go directly east. I know for a fact it only just grazed the north tip of the Shattered Bridge. Meaning the southern side of the sandstorm ran halfway through row 4 on the map.

Are you ever planning to put the sandstorm back in the right place? 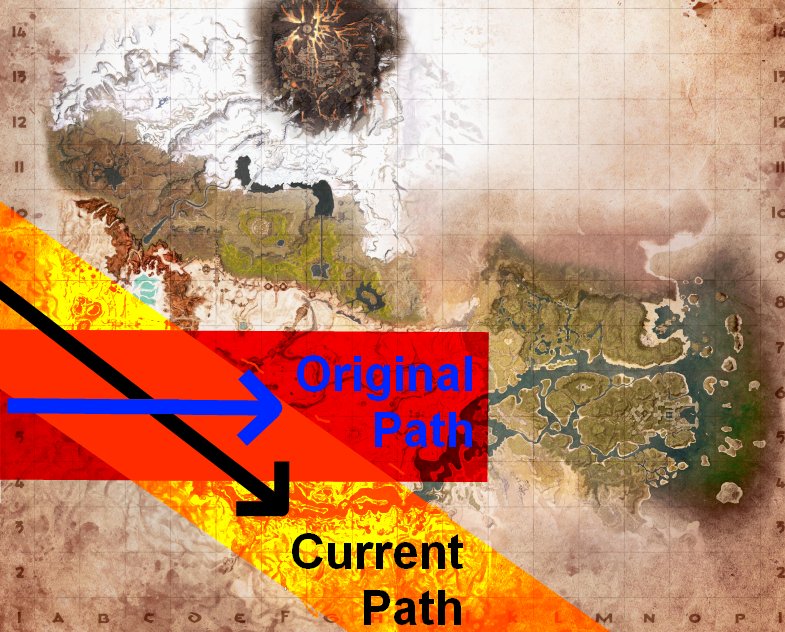 Hmm. No clue what the devs might have said or done in the past, but I got to say I like the current path. Being hit by the sandstorm as a newb, and the threat of being hit again if I didn’t find/make proper shelter quickly enough, really enhanced my first play-through. Which definitely needed some enhancement, since the default newbie settings equate to needing one sip of water every day or two and maybe a bite of food a week. And it makes sense to have the path cover more of the deep desert than of rocky areas where the mountains would break the blowing sands anyway.

It is a cursed magical sandstorm after all.

They said something about addressing the sandstorm, but it seems to be not high on the list.
The sandstorm should cover the whole desert area except parts of the newbie area, so that starters can outrun it. Its a cool feature, adds a lot of atmosphere to the game. I remember when i was a beginner, and i couldn´t find shelter, but managed to gather and build a little box, nice thrills!

Just read lore about Petruso the Sandstorm Maniac and you’ll know why sandstorms never go past the Sandswept Ruins.

The map does not accurately illustrate the current direction of the sand storm. I am sure that the storm covers the E8 cell - I had a wonderful house there, before the patch changed the direction of the storm and my house is now on the way of the storm.
But I think it’s wrong that the storm now passes through the safe zone “beginner river”, where low-level characters live. I always thought it was a reasonable decision that this area was safe from the storm.

What is multi´s fix? is that in a mod?
And i think it should start, where the warmaker dungeon is+ considering it is a broad thing, it should almost reach the tundra at its start. in the end it could at least swap into the jungle, which is protected by the witch queen. 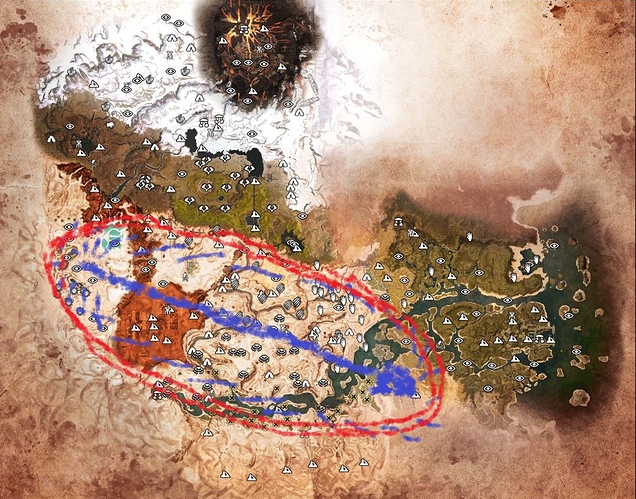 Just read lore about Petruso the Sandstorm Maniac and you’ll know why sandstorms never go past the Sandswept Ruins.

But the (current) sandstorm does go past the Sandswept Ruins. You can literally watch it roll past and keep going way beyond the ghost fence.

Just for my understanding. Why is this a problem again?

It goes past ghost wall but not into the Jungle. Petruso saved his Lemurian people.

It goes past ghost wall but not into the Jungle. Petruso saved his Lemurian people.

But the lore states that Petruso put the sandstorm into a temporal loop. The sandstorm would pass across the Exiled Lands, stop when it reached Petruso, then start again.

The lore also states that the sandstorm was on a course to Xel-ha, the Lumurian city. Which is to the east. The original sandstorm path points directly at it.

The lore does not state that Petruso knocked the sandstorm off course, causing it to take a NorthEastly direction past the Sandswept Ruins and just keep on going.

Hello @Summer, thank you for bringing this up, we’ll be sure to poke the developers regarding the sandstorm path issue.

Me watching the sandstorm go by, in the distance. From where it used to wash right over.