Why am I logging in dead?

For the second day in a row I have logged in to a dead avatar. The second time I noticed the message “you were killed by yourself”. I log out in the center of a 7 x 9 square sandstone building with no windows. I am on an official PvE server. The event log shows a time of death several minutes after I log in. I guess the server clock is not very accurate.

The right message appears when you’re online and have respawned in the desert. If you don’t find yourself in the desert, then the message was probably lost due to a second death, like poison.

I log out in full health with no effects on me like poison. The death occurs many hours later, after the server restart and just when I log in.

If you are logging out on a bed sometimes you can die from fall damage logging back in. Also happens at respawn (death respawn point to bed). Happens to me all the time. Not sure if this is the case for you, since you did say the middle. It will always say you killed yourself for this death.

Are you logging next to a furnace? They can overheat and kill you while you sleep as well.

Are you logging next to a furnace? They can overheat and kill you while you sleep as well.

LMAO I forgot about that. I remember just running by the kilns (8) all going at once and you got the effects even on the other side of the wall through the vault.

Lol it’s the worst when a clan mate is asleep next to one and you mindlessly turn it on to smelt - just to see them pop a few seconds later. @spainchaud got any buddies hiding the truth from you?

There is nothing near me where I sleep and I have no clan. I am behind a closed door. Not sure why I would be falling when log back in. My house is on an island, only a few feet above water level.

Hmm that does seem weird. Are you in a particularly hot/cold region of the map? I don’t think your armor provides weather resistance while you sleep, so you would need an insulated room (t2 or t3) to stay in.

The falling damage on wake up is weird and hard to determine why it occurs, but it does sometimes.

That glitch is as old as CE itself. I still, after 4.5 years of playing, empty my inventory and armor into a chest before I log out. Just make sure you are at full food and drink before you log. When you log out, there is a timeframe where your body still uses food/water. If you log out low on either, you may die.

Follow the example of @JJDancer, it is truly a very old bug. @Zeb is totally right, especially the derketo dlc bed is a good suicide trap

. The only solution I found so far is to sleep on a carpet, or rugs. Even when I float in my base chests, benches and carpets are my savior. You will start floating in your base when it will have to many filled chests, especially on the ceilings…
Welcome to Conan exiles my friend

I put down a rug, under my bedroll, we will see if that helps.

jusdt like in real. even u are knocked out u need water to survive ;d

If you are logging out on a bed sometimes you can die from fall damage logging back in.

Reminds me of the time I fell out of the bunk bed as a kid and landed on a bunch of toys. That really hurt. Sure woke me up though. Fortunately I didn’t break anything. Just ended up with some bruises.

Though I guess in the Conan universe, those “toys” would be swords and axes and daggers and whatnot. So I guess that would explain why falling out of bed would kill you.

a furnace/fireplace or even the wrong type of build (e.g. khitan build in desert) can kill u when u go offline as the bonuses from the armour/ perks do not work when u r not online.

What u shoud keep in mind though is that a furnace or fireplace placed directly above or below u (as many floors up or down it does not matter will also kill u), but in this case the cause of death is ussually thirst… torches raise the temp also(not witchfire and glowing stick) a bit and rugs do so also…
so in order to see if this is the reason u should get naked and observe ur temp…

could u plz share the coords of ur base? as the spot ussually has to do with heating/cooling effects

Fireplaces are the worst, since they turn themselves on after you log out.
I had an avatar I left on another server in a guildmates base, and I would turn off the fireplace before I logged, but every time I logged back in I was dead, and the fireplace was burning merrily.

@JJDancer , True, yet I sleep in front of a fire place every single time. But my Bella is wearing the golden panties from derketo dlc. This loin cloth is disgusting. I know that armors do not work when your character is unconscious but the second perk of vitality does. So if a player does not have 2 perks on vitality it’s better not to sleep everywhere, it is dangerous. Plus I had pvp team mates that slept everywhere, I hate that, you have a room dude, go crash there. I avoid to tell them however, it is weird for me not others since we speak about a game. I just need everything in order 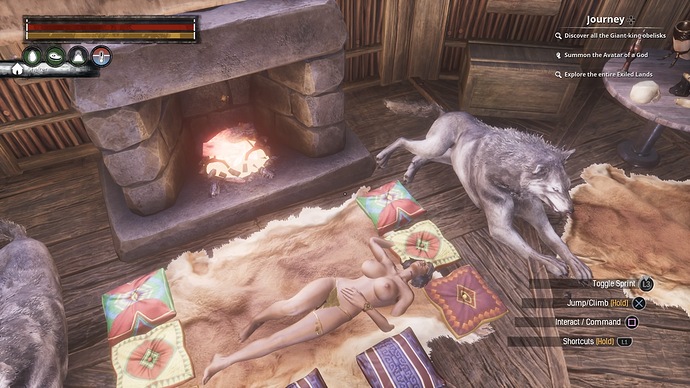 When pvp friends sleep anywhere take their armour and dye it pink and then put it back on !!! XDDDDD its hilarious !!!:PPPP