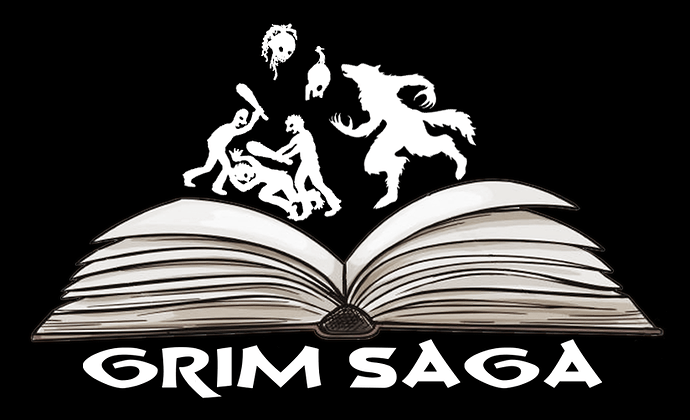 Grim Saga RP is dedicated to text-based roleplayers and lovers of grimdark stories alike, which defines our settings, ruleset and server philosophy. The Hyborian world is a dangerous place and we aim to replicate that with the added challenge to the environment and the possibility of dark beginnings, journeys and endings to a character’s story.

Every action you take, both in character creation and in-game will define your experience. Gods and culture will matter greatly, be that in divine rituals or in the forging of alliances. Will you survive and prosper? Or fall victim to the brutality and many horrors of the Exiled Lands. 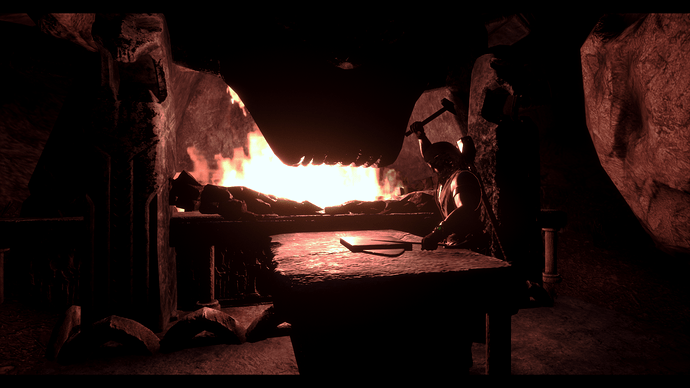 Rich Lore
Our server lore is set within the Hyborian world, you are a lost soul tossed into the Exiled Lands for one purpose or another. However, we wish to expand on both the game lore and the world’s lore, making it darker, grittier and with a whole host of monsters. Our lore takes inspiration from Howards’ own work as well as the Conan RPGs as well as real-world myths, cultures, Warhammer Fantasy, Lovecraft, The Witcher, World of Darkness and many other fictional universes. All with the intent of creating a unique and dangerous roleplaying environment.

Deep Server Story
Discovered through our robust magic system and Game Master run events, however, a story that is constantly changing through the actions of the characters that find themselves trapped in the Exiled Lands.

Ritual Magic
Magic is a powerful tool for the would-be sorcerer or religious fanatic, however, magic comes at a price. Want to bring down a plague on a nearby town? Find the right patron and do what they demand and you may taste a flicker of their power. However, the gods are cruel, perhaps you will be the first victim of this new plague. Forge your own pact with a demonic creature and attempt to bind it to your will, or risk it taking control of your mortal shell.

Endless Options
Various creatures and corrupted humans stalk the world of Hyboria. And we aim to allow our players to experience them first-hand. You can play as Vampires, Werebeasts, Hellspawn, Inpu, Serpentmen, Deep Ones, Beastmen, Giant Kin and many more. These races have been made to fit our setting and are controlled to maintain an RP balance. Human characters will also have the option to spice up their already diverse backgrounds with various sub factions to pick from, be that religious cults or zealous monster hunters and so on. 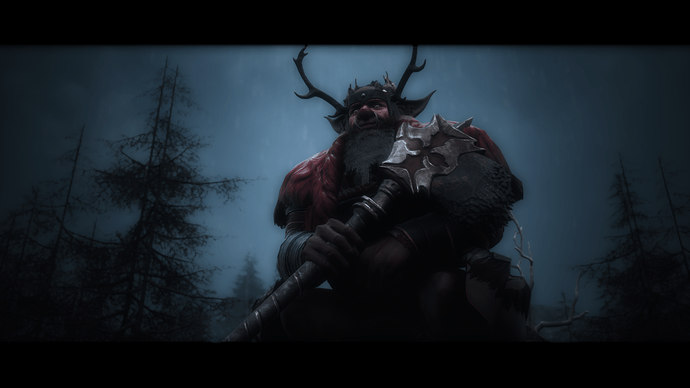 A mix of tabletop RPG options and integrated game mechanics. 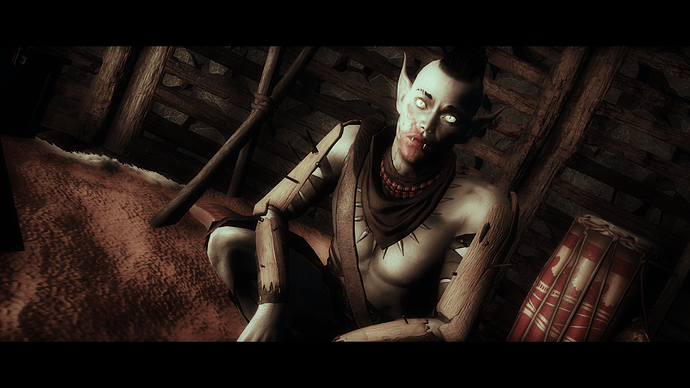 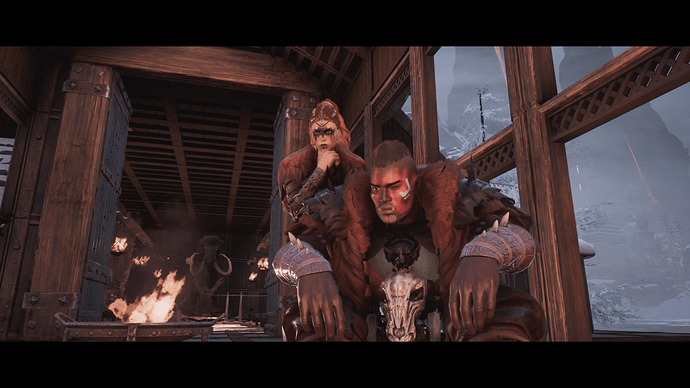 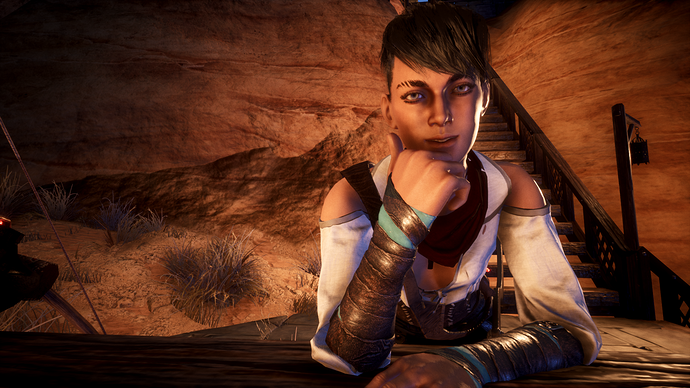 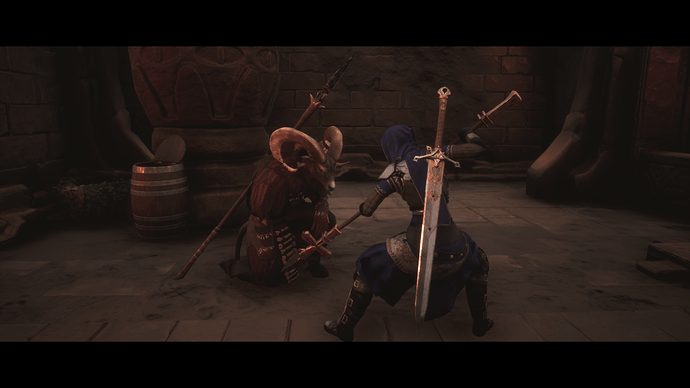 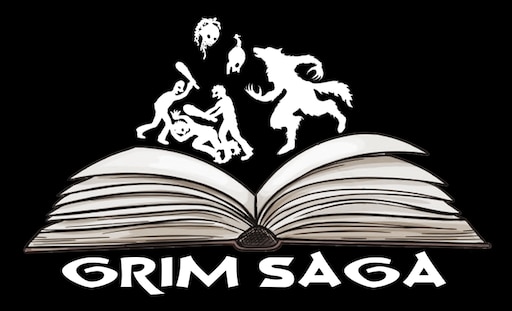 Short version available to everyone who joins discord, a longer, more comprehensive version becomes viewable once your application is accepted.

We have been live since the 11th of April 2020 with constant updates to both our custom lore and the server as a whole. Thank you for taking the time and we look forward to welcoming you to our community. 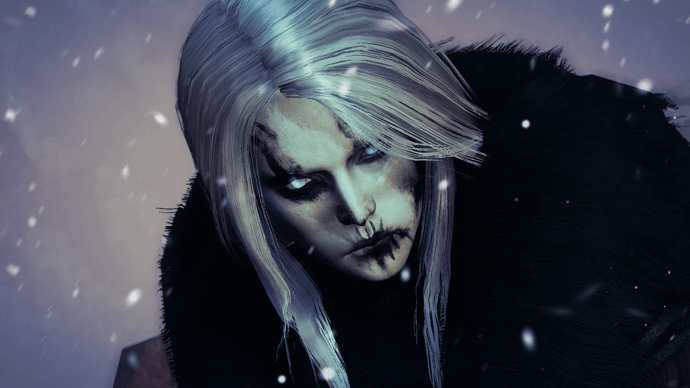 Our winners for the 1 year anniversary competition 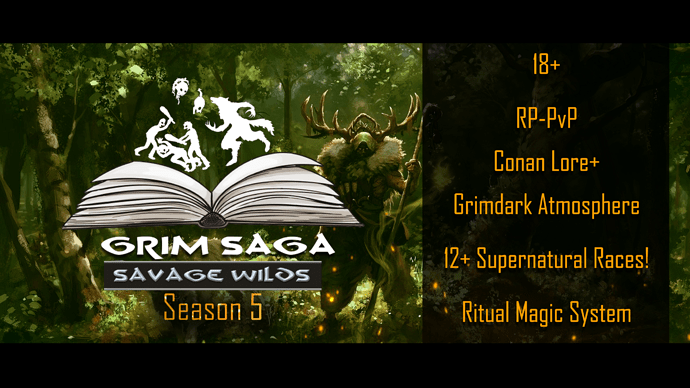 Grim Saga RP Server will be heading to the Savage Wilds map for Season 5!

We have added our own lore to this amazing map, to make it part of our setting and will return to the Exiled Lands at some point!

Hope to see you there!

Season five is going strong and we have made our way back up on Batlemetrics! Currently sitting at number 11!

We are on the front page of Battlemetrics!

Which for an RP server that is double gated is really great!

Thanks to all of our amazing players!

Some amazing pictures from our player base ^^ 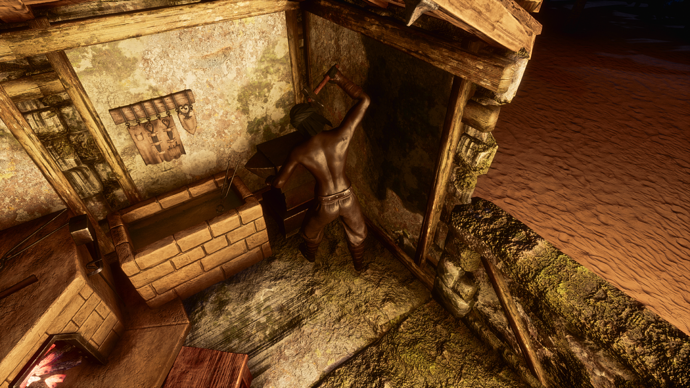 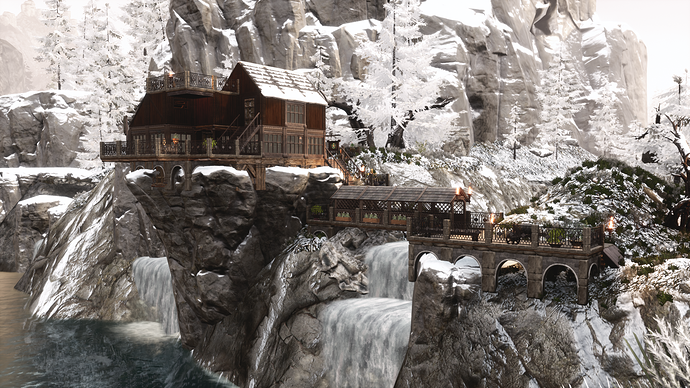 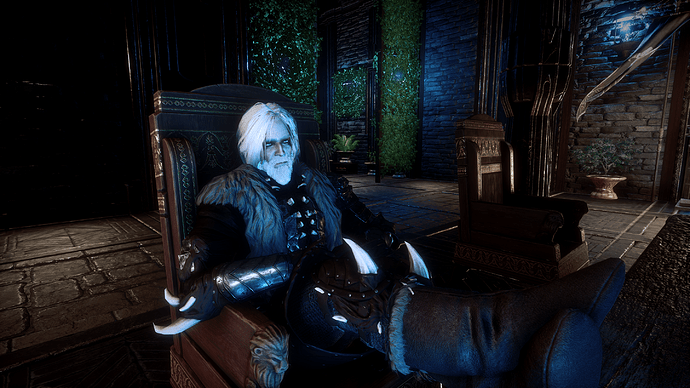 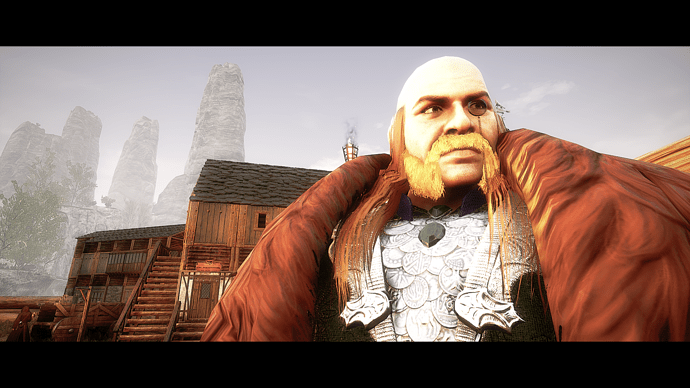 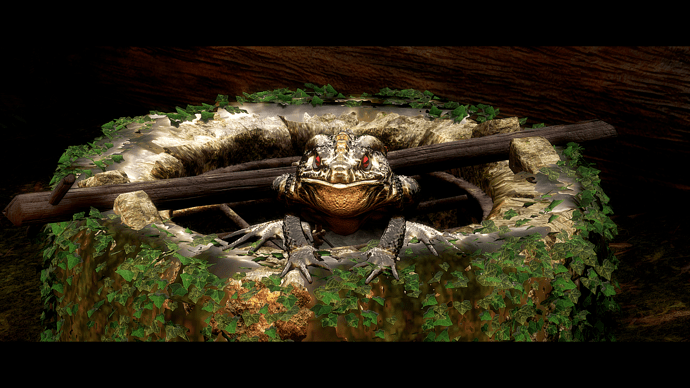 The season is still going strong, with many new faces coming to share their perspectives and unique stories. Why not be one of them? ^-^

We have a new and exiting trailer to go alongside some of our updated lore for the Black Kingdoms, you can check it out here: 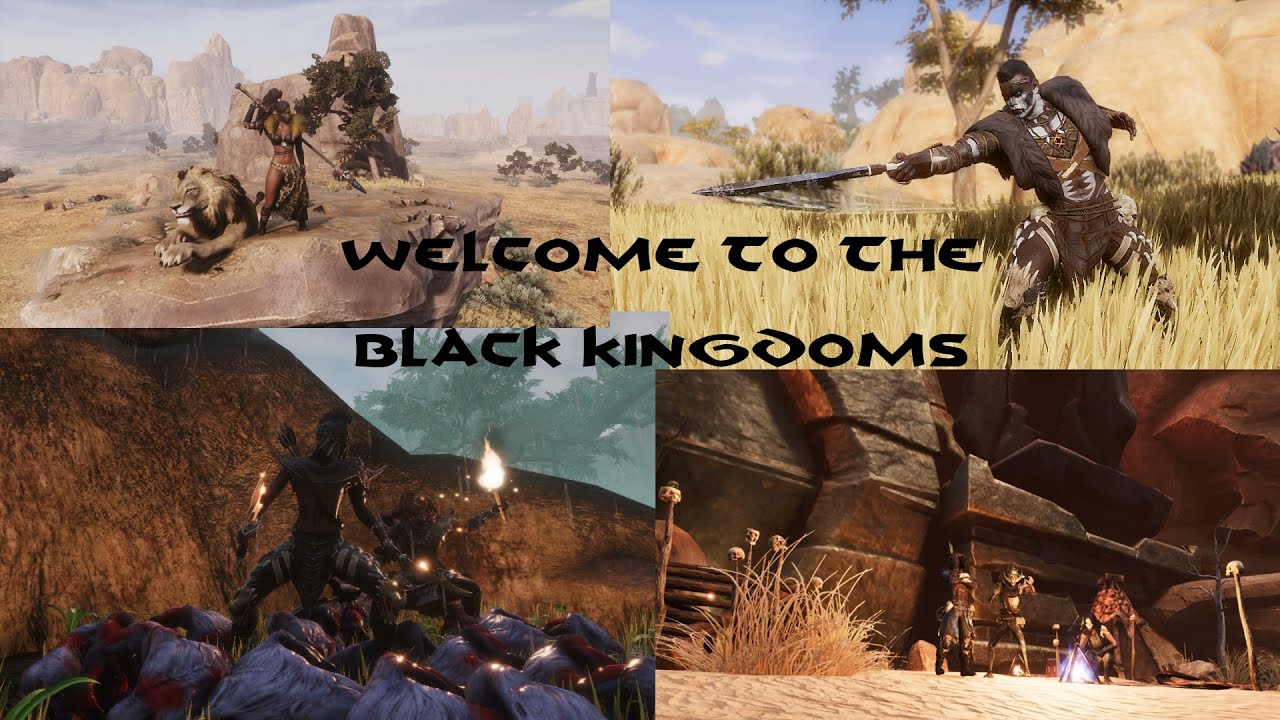 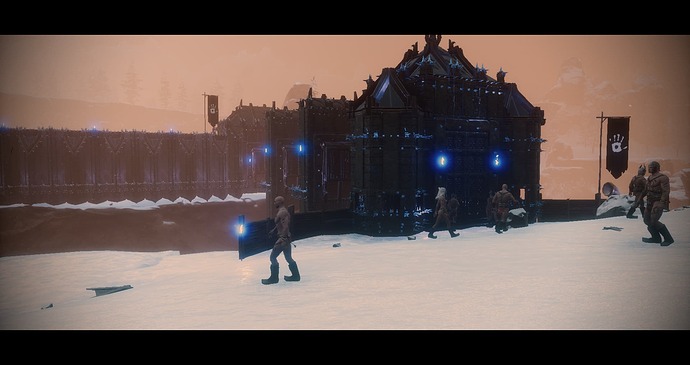 Lots of spooky happenings occurring in the land of Exiles!

Gearing up for Season Six! Which will start on 8th October!

We are heading back to the Exiled Lands but with a few twists. See you there! 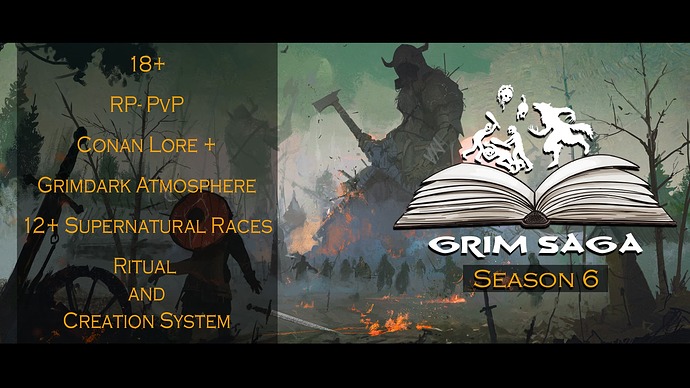 With over three hundred characters played last season we are looking forward to season 6!

Will you be joining us?!

Come check us out! 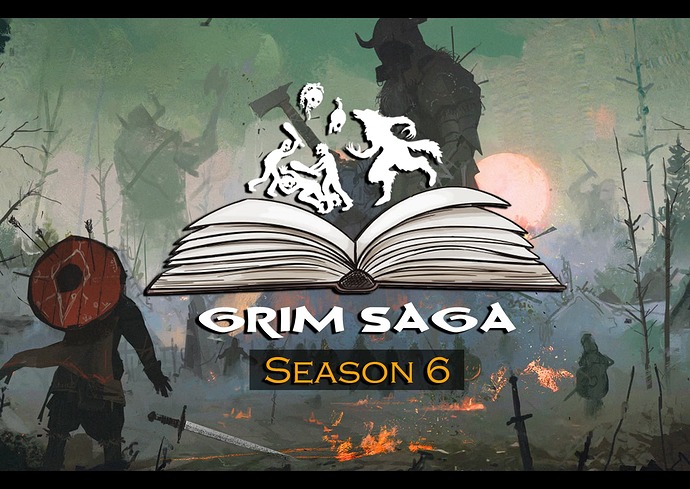 Season 6 is going strong with over 200 active characters playing on the server!

Still over 200 players active and playing.

Much love to the sane members of the Conan Community ^^

We have new lore.

Our human races now include the ligureans, the Black Ring has taken its place amongst our Guilds, Cults and Orders and the Gods of Khitai has become known within the Pantheons by Culture.

We have had some awesome additions to our custom map thanks to our amazing modders and our season is still going strong!