[PC] 3 players looking for a server

3 UK players looking for a server to join for PC.
We are returning players after playing conan a couple of years back.
We would like to join a well populated yet fresh server

You would be welcome to join our server - Land of the Wizards. We are a friendly PvE with optional PvP server has spaces for new players.

We currently have two clans of three people each but room for a few more to make their mark and build their kingdom.

We are very relaxed and friendly the two clans current helping each other out during purges.

PvP is restricted to Weekend morning and only by prior arrangement

Currently no mods, although that is open for debate.

No current restrictions on building and thralls other than don’t block off important or large amounts of resources.

If you would like to join the land of the wizard then message me.

The Underverse- PC (18+ ONLY) (E)RP-PvP/PvE (conflict for slaving and IC relations) (AoC, EEWA, Sexiles, Active Admin, and more…):
This servers main goal is to provide people with the environment to live out their RP fantasies. Whether you want to rule a kingdom, be a slaver, be an assassin for hire, work underneath someone, etc. It’s up to you to provide your own destiny in server. We offer both PURELY PvE RP, as well as PvP-RP (which includes conflict for slaving and kingdom play). You can choose with system you would like to be involved in, when you first join server (via a thespian), and everyone must follow your choice (ie, if you pick JUST RP, which is PvE RP ONLY, then no one is allowed to touch you for conflict (slaving/kingdom play). We do not have a super strict building rule, so you can build a kingdom, if your heart desires. Our only building restrictions is, 1 building or 1 village/kingdom for clan. We are VERY heavily RP backed for all rules and server overall.

If you’re interested, feel free to check it out. It’s a new server (not new to running servers tho), and getting more ppl all the time. We have ppl from all over the globe, so play times are kinda wonky across the board so far for community lol but theres a few already established clans waiting to start doing both regular and kingdom play RP.

hi Abu
im looking for a group of fun players that would like to play non rp with me
is there a chance that i could join u guys
im 19 (20 this summer), i have discord, i speak english , and will be active when i have people to play with, im friendly and social aswell
if u want to play u can add me on discord (jobran16#2423)

Come and join our exciting PvP, RP server (PC, with rules). We offer an incredibly unique server to most, with lots of perks. Clans and solos looking for team-mates! A kingdom looking for a King/Queen!

This server was founded by admins who wanted more from Officials than raid after raid and had many ideas on how to enjoy the game more.

We pride ourselves on our RP here. Whether you are a novice or an expert in RP, we welcome you. For beginners we have PvE immunity for 2 weeks should you wish. 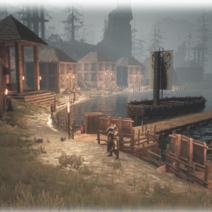 Check out the New Lordore community on Discord - hang out with 73 other members and enjoy free voice and text chat.

Seven Kingdoms (with hubs to port around the map with)

Admin only content rolled out in all the above

Dungeons (with more in the pipeline)

A nice, friendly population for US and European players (it’s never quiet!)