We have a new set of changes for you guys and girls on TestLive.
Let me take this opportunity to once more thank you all for your help in working with us so closely.
We are running some performance tests on TestLive which is the reason that the servers can be laggy at times, so please bare with us. We do keep server restarts in mind as we monitor the servers for performance and will do so as needed.

As mentioned on stream on Friday evening, we are also working on Purge fixes but they didn’t make it to TestLive just yet. Stay tuned for updates on this soon.

Any info if smaller pens will be added to the game? The current ones are bigger than my house.

thanks for the update. Looking forward to testing more.

I was just on testlive us1 this morning before the update, and was feeding my pets/thralls.

I was wondering if this seemed like an excessive amount of food required to get them back to full?

My thrall was showing the hunger meter at 70. It took 25 grilled steak to get her from 70 to 99? Doesn’t that seem excessive? Thought the amount of food required to feed them was being reduced? That stills seem like a major grind.

Still seems like way to much of a grind.

Could you possibly move the Camel calf merchant to the stables in Sepemeru near the prison it seems more appropriate.

We’ve noted it down. No official update yet

Thanks for the fast reply.

Why did you just put all 3 egg merchants in one place at the bay that just seems lazy.
spread them out a little.

Because these fixes/balancing are directly related to feedback from the community and we were able to put these out efficiently while other bugs are more complicated, having more dependencies with underlying systems.

We’ve explained this in the past: There is a prioritization that takes a lot of different aspects into account.
complexity of the issue and how long it will take to fix it. Possible team and coder to assign who can work on the bug in question or who was initially involved in working/coding that specific system. How many players experience this bug, how influential this issue is for the majority of the player and how it influences their gaming experience. There are teams working on bugs that didn’t make it into this patch simply because those fixes are not ready.

Obviously each player has their own issues THEY want to see addressed or their own issues they specifically run into. That doesn’t mean it’s equally important for other players that we address these issues.
There are mechanics that we absolutely are working on, such as the Purge.
Out of curiosity, which old issues are you referring to specifically?

Again if we had a button to push to just fix everything, we would.

Hi Tascha, I was not referring to a specific bug, but yes the purge is one of them. I could write a lengthy post with many problems that exist since going live, and many more that came with the MOAP. But let us talk about performance, why are we not seeing any improvements on this? Even the ill attempted performance fix that stops the world wherever there is no player present has caused more problems and is more game breaking than it is being a ‘fix’ for anything. Altho many people on the forum are talking about it, there is no communication whatsoever on this from Funcom. I challenge you to find 1 player who is not experiencing performance issues. How much more influential do you want it to be? I could start about AI in general but I might get unpolite so I’ll stay away from that for now. I’m also wondering why there is no 180 degree turn on Funcom’s approach to the ‘fixes’, you more than us know the statistics. How many copies you have sold and how many of us are still sticking around? How many players you are chasing away with each of your ‘fixes’? Clearly there is something wrong would you not think? The button you are looking for is labeled ‘get your stuff together as a company’, stop hiding behind the ‘this team’ and ‘that team’. Ty for your reply and again sorry for being critical and maybe somewhat salty, I do want the game to succeed.

Fixed a bug where Archer Thralls would produce infinite amount of special arrows.

Can a clarification be done on this? Does it mean ALL types of arrows (Including Iron, Razor, Set and so on), or only the newer ones (Poison cloud, explosive, tar and so on)?

Yes, this sounds like we may have to put stacks of arrows in the thralls inventory now, so that they do anything above base damage.

And if that is true, it brings back one of my worries about thralls having small inventories and the inclusion of food + decayed food added to the mix.

Just to clarify, I have no qualms if they limit the newer arrows. I honestly was thinking of switching all my archer thralls to half poison cloud, and half explosive arrows since their aim is terrible.

Could this be due to the fact that iv already learnt the religion and already completed the dungeon back when the pets patch first arrived?
The whole system feels out of order

My guess is that when they mean special arrows, i think they mean things like the new arrows and poison ones as to make sure players won’t have their thralls spam explosive arrows without ever running out for example since the special arrows like that are more ment for a tatical use.

Though my guess is iron, harden steel and starmetal arrows for example won’t be affected at all since they just have dmg increases and such.

Only the new, special arrows

That’s a relief! I agree with having them on a limit, as they are miles better than regular arrows. Plus, it would be broken if they could be farmed from thralls considering they have an infinite supply.

Thanks for the swift reply

The dancers in my base are not dancing, but they are producing entertainment. (this is just one i left outside to starve) 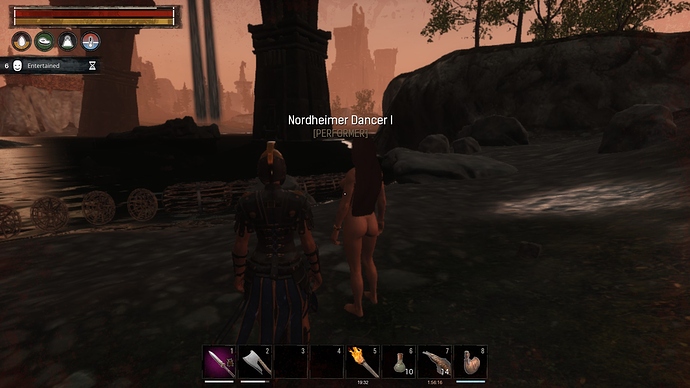 Edit: They began dancing again once I returned from a journey to the Grove.

Some of the creatures, namely hyenas, in the Grove are not moving after their initial attack and/or yours. They plant themselves in place and stay aggro’d but do not move. It doesn’t happen all the time, or to all of them. You can kill their companions around them, but they do not strike if you are not in biting range.