I just tried to make a character transfer, after Funcom announced that they will open up for it again.
My character have been stuck on another server, after they closed it. But - I still cant transfer my character. It got a cooldown on (see image below), 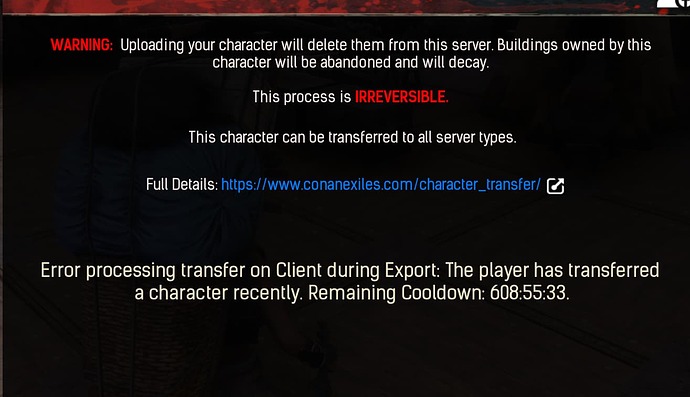 There is a post about 30 day cooldown for the time being so people can use the transfer feature to return back to the server they want to return to.

But I haven’t even used the service before , so it doesn’t make any sense that I have the 30 days cool down …

Hmm… that isn’t good, that is for sure.

But I haven’t even used the service before , so it doesn’t make any sense that I have the 30 days cool down

Wait, I’m confused. If you haven’t used the character transfer before, at all, what do you mean by this:

My character have been stuck on another server, after they closed it.

i believe that is unintended.

i think the cooldown issue is for people who were already with cooldown, regardless if you used or not the feature. so if cooldown was over, you should be fine at least for 1 transfer.

Intended and working as planned according to them.

Greetings, Exiles! To allow anyone left behind to re-join their clan/friends, we have re-enabled character transfers. However, the cooldown between transfers has been set to 30 days to avoid an issue with repeat transfers. We aim to return the cooldown to normal values once the issue is fixed. Thank you for your support and understanding.

not even close to what i meant, please read again arthur!

I think that is actually hours, as they stated it’s 30 days (minus however you were already waiting already). So that would be about 25.3 days at 608 hours.