After entering server my character can’t equip any tools or weapons for more than 1-2 seconds.
He automatically sheaths them. Only fix I’ve found is removing the bracelet, which makes the bug go away. I have been playing on the server for a while and the problem suddenly ocurred after like 30h of gameplay.
I checked the mods, all are up to date and also there aren’t any major conflicts, at least that I know of.
I tried equiping bow, 2h weapons, removing all items from bar but it did nothing. I checked other posts, describing the problem, but found no solutions.

Installed Mods: (The mods are presented in their loadorder) 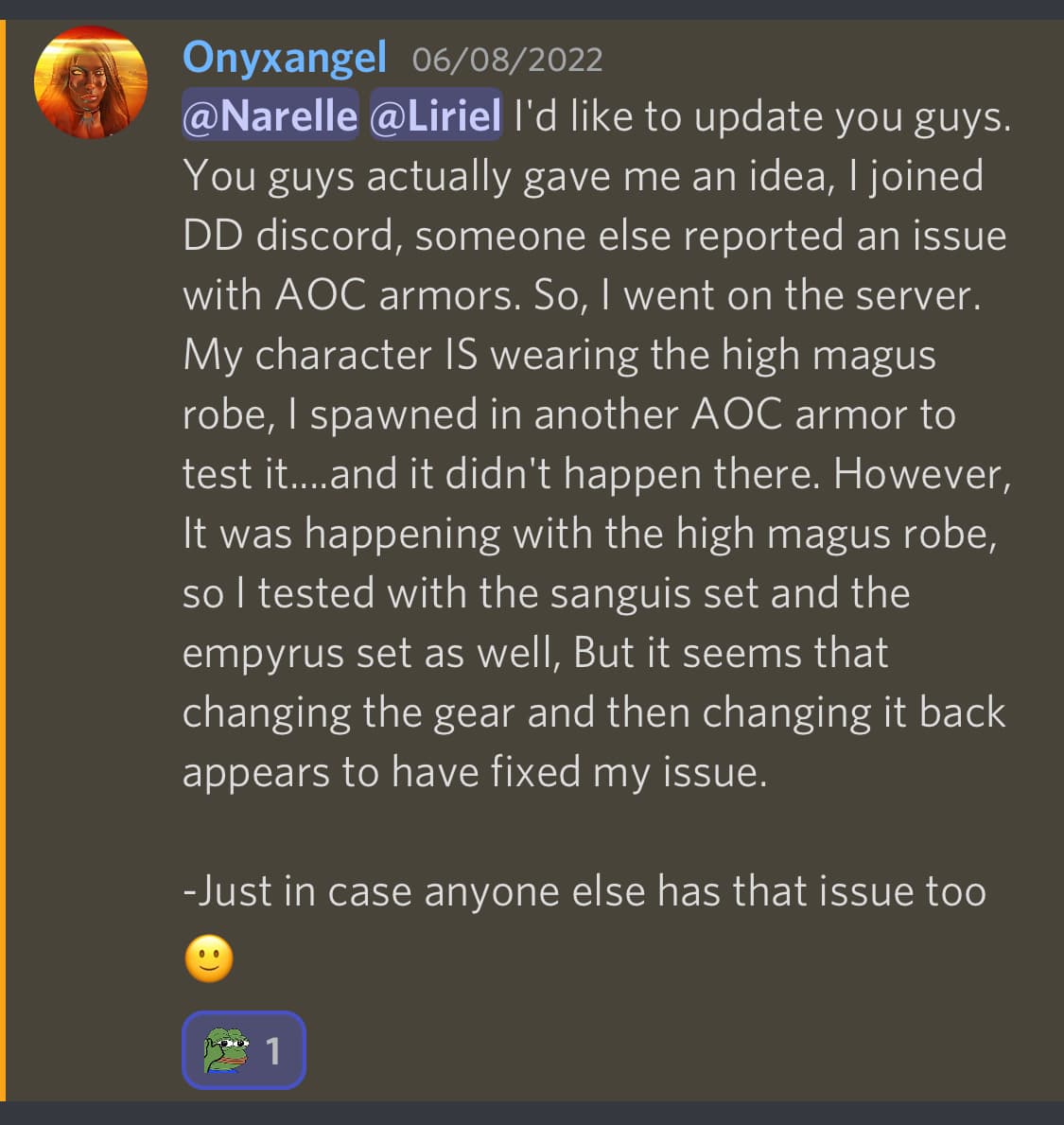 I’m not sure it’s DD now. I think Fashionist’s armor styles were messing something up. After removing all the styles from UI’ slots and relogging tools and weapons are working fine…
I guess if someone else has similar issues to mine, I probably advise them to use something like Outfit Manager or CAS if they want to use armors for cosmetics.

Fashionist works without any issues on my server and many others. It is not Fashionist but it could be a conflict between Devious Desires and other mods as mentioned. Multiple admins have confirmed that removing Devious Desires solved their issue permanently without any other changes to their modlist. It was narrowed down to this mod as there was an admin who confirmed that they recently added DD and started experiencing the issue a day later. After removing the mod, no further issues.

However, with such a large mod list conflicts are possible so if you have found a solution good for you. If the issue returns, remember about this post.

After a little bit of testing I think you might be right. I wonder if DD affects the player state and conflicts with Fashionist’s/Outfit Manager’s implementation of armor cosmetics… Either way I think it’s probably better to just skip DD mod as it’s not the first time i heard about odd problems with that mod.

If someone want to use Fashionist/Outfit Manager together with DD I found possible solution to temporary fix the weapon sheating problem.
If you are using Outfit Manager, unequip your modded outfit, equip your weapons and equip your outfit once again. The weapons should work properly now.
If you are using Fashionist, unequip your modded outfit from every slots, equip your weapons and equip your outfit again. This one not always work, but it’s worth a try.
And of course if you don’t mind dying u can try removing the bracelet to solve the issue.